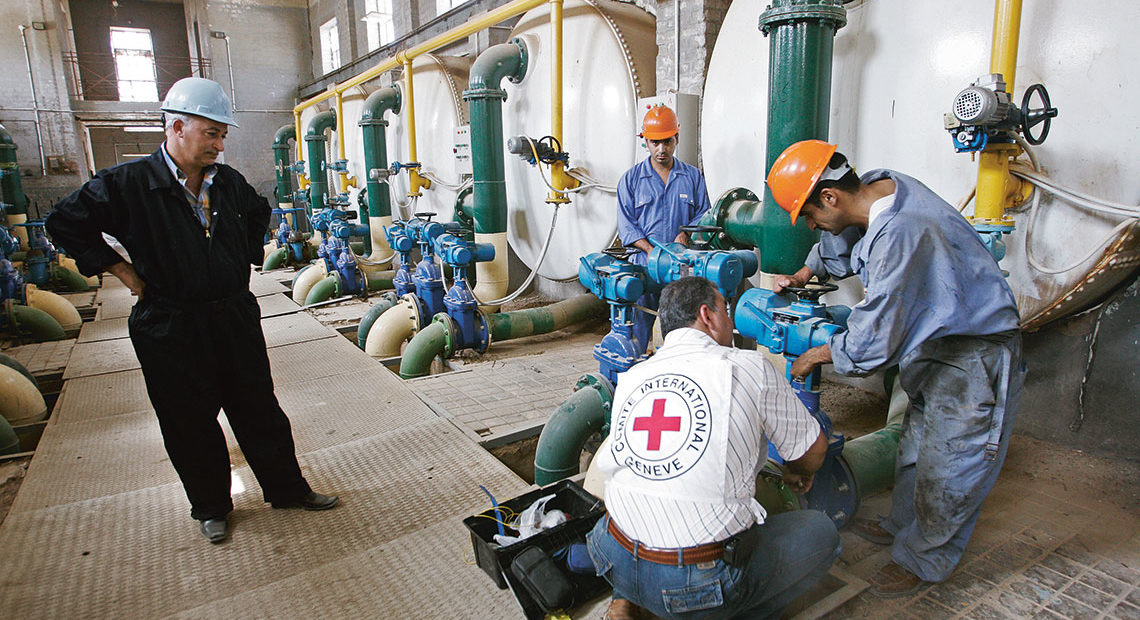 The decades-old debate on the humanitarian-development divide has resurfaced with conflict prevention and peace as a third dimension in the so-called nexus. This blog post looks first at the economics behind the renewed call for greater synergy within the nexus. It then focuses on framing the nexus’ potential with a view to effectively addressing the needs and aspirations of people in protracted crises.

The economics behind the renewed nexus hype

Since the turn of the Millennium, many developing countries have graduated from low-income to middle-income status and therefore no longer require massive influxes of foreign aid. Development agencies are under pressure to divest from such contexts and invest more in conflict-prone countries where implementing the Sustainable Development Goals (SDGs) is most challenging. They also seek to preserve global public goods—such as protecting the environment—or to contain ‘global public bads’ associated with armed conflict—such as the spread of pandemics, insecurity and large sudden migratory flows.

Development agencies thus increasingly (strive to) operate in the same locations as humanitarian actors. They are allocating a growing share of official development assistance (ODA) to so-called ‘fragile contexts’ and conflict-ridden countries. The United Kingdom has, for example, decided to allocate at least half of its foreign aid to such contexts. And, the World Bank has committed to doubling its funding for ‘fragile, conflict and violence-affected countries’ under the latest International Development Association replenishment.

People affected by armed conflict obviously don’t care whether the assistance they receive is labelled humanitarian or development. They want to be able to address their own needs and see their rights upheld. Yet, for historical and institutional reasons, funding schemes and aid agencies still largely function along the humanitarian-development divide, with distinct operational approaches and principles.

Since the 1990s, debates on the humanitarian-development divide have produced rich jargon: linking relief, rehabilitation and development (LRRD) along a continuum versus a contiguum, early recovery, whole-of-government approach, stabilization, building resilience, etc. The topic has resurfaced out of a concern to better address the needs of people caught up in protracted crises. In the wake of the 2016 World Humanitarian Summit, the UN Secretary General called for a New Way of Working to transcend the humanitarian-development divide through a ‘coordinated long-term approach which sees the UN stepping up cooperation between humanitarian and development agencies, including the World Bank … [toward] common goals’.[1] The UN reforms initiated by UNSG Antonio Guterres further advanced the notion of a Triple Nexus to address the humanitarian-development-peace divide—where armed conflict is conceived as an obstacle to development under the assumption that there can be no development without security (and vice-versa).

What do resource flows tell about the nexus’ potential

Current trends are seeing ODA growth level off while needs for protection and assistance remain at record heights. As a result, donors and aid organizations are seeking ways to enhance aid effectiveness through greater cooperation and synergy across the humanitarian-development-peace divide. The emphasis they place on different outcomes depends on the mission and interests of each actor.

By the end of the Cold War, ODA was the single major North-South resource flow. Of that, international humanitarian assistance accounted for less than 3% of official assistance to developing countries (where virtually all war-torn countries were, and still are, located). 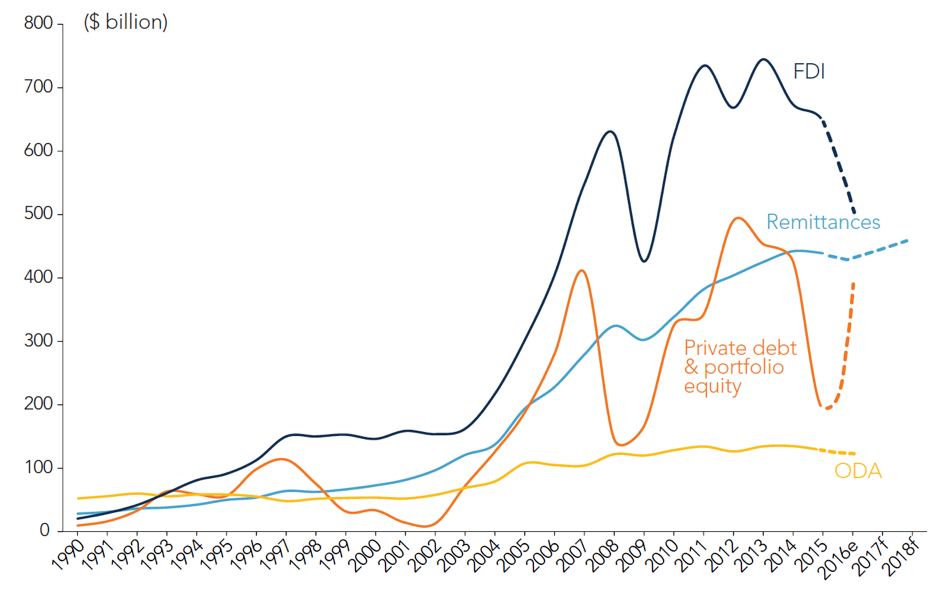 In a nutshell, the humanitarian market has boomed, but continues to be marginal compared to other resource flows. Even when combined with private humanitarian funding—which is about a quarter of OHA[3]—international humanitarian assistance remains less than a tenth of the total resource flows. As illustrated in Figure 1, other resource flows include foreign direct investment (FDI) by multinational companies and migrant remittances. The UN peacekeeping budget is much smaller still, standing at $8bn in 2016 (equivalent to 1.3% of U.S. defense expenditure that year).

Somewhat counter-intuitively, the picture remains the same even if we only look at the 20 countries that received the largest amount of humanitarian assistance over the past few years. FDI and remittances consistently dwarf humanitarian aid.[4] This means that diasporas and private investors make a significant difference in terms of livelihood, vulnerability and outreach in conflict-ridden countries. Not to mention that virtually all remittances effectively end up in the hands of migrants’ relatives back home—save the small percentage charged by money transfer companies—while a large chunk of foreign aid serves to pay for salaries, logistics, administration, fundraising and other operating costs. In addition, the domestic government revenue of the 20 top recipients of humanitarian assistance are twice as large as all resource transfers from abroad. This indicates that domestic policy and budget allocation decisions are obviously key to people’s welfare in many of these countries. When one considers that OHA accounts for just a sixth of ODA, Figure 1 helps put the volume of resources associated with different actors into perspective.

This does not mean that humanitarian aid is not essential for the vulnerable in some of the toughest places. What it shows, however, is that humanitarian aid is marginal compared to significantly greater resource flows generated by others. This state of affairs suggests that there is potential to leverage the resources and power of other stakeholders to achieve greater humanitarian outcomes in the context of ‘a nexus that works’.

It is important to note that North-South resource transfers in Figure 1 fail to capture increasing South-South cooperation involving trade, investment and aid flows between emerging and less developed economies. As significantly, Figure 1 says nothing about the amount of resources that flow in the other direction—i.e., from developing to industrialized countries. By some accounts, South to North transfers in the form of loans,[5] interest repayments, profit or income repatriation and illicit financial flows could be twice as large as North to South transfers,[6] which has become a major issue in global development debates.

Framing the nexus: Concepts and principles

In the 1990s, several studies showed that humanitarians can inadvertently do harm while seeking to do good. This could happen, for example, by fuelling war economies and prolonging conflicts or by creating aid dependency and stifling local markets and initiatives.[7] Since then, many relief organizations have not only committed to ‘do no harm’ but seek to do good well beyond saving lives and alleviating suffering. Principled humanitarian organizations seem broadly supportive of the SDGs and peace even if this is not their prime purpose. Then, why not simply embrace peace and development? To what extent should the specific definitions, purposes and principles of humanitarian action and development set limits to collaboration?

Donors and major aid actors have adopted instrumental, self-referential definitions of humanitarian and development assistance. Such definitions have kept scholars busy for decades and remain controversial. In 2016, the European Association of Development Institutes advanced a definition of development in close consultation with academics from China, South Africa, Brazil and the United States. They reached a consensus to portray development as a process involving profound societal change with ‘social, economic, political, technological, ecological, gender and cultural aspects’ as well as ‘interactions between dynamics at the local, national, regional and global levels’. Development studies are thus interested in social change processes that ‘cover an expanding range of concerns’ going beyond the sole global South.

From a normative viewpoint, development interventions can be perceived as positive or negative depending on the type of intervention and one’s own interests and ideology. For instance, the opening of the Trans-Amazon Highway linking the Brazilian heartland to the Pacific Ocean a decade ago brought abrupt societal transformations in Puerto Maldonado, a Peruvian town in the Amazon Basin. Some residents welcomed the new opportunities associated with the road connection while others opposed the change, sometimes violently. Aid organizations thus tend to characterize the type of development they promote as sustainable, inclusive, equitable, rights-based, pro-poor, or human development.

The definitions of humanitarian action reflected in Red Cross/Red Crescent, UN and OECD documents refer to saving lives, alleviating suffering and protecting human dignity in an impartial, neutral and independent manner. The International Humanitarian Studies Association defines its study object as ‘crises caused by natural disaster, conflict or political instability’ with a focus on ‘the way humanitarian crises evolve, how they affect people and their institutions, communities and societies, and the responses they trigger’.

What do such definitions imply when framing the nexus? A few distinctive features stand out:

These features call for caution in framing the nexus properly but should not prevent any stakeholder from seeking greater synergy between humanitarian, development and peace endeavours as long as it is not at the expense of the humanitarian space and core mission. A look at the mix of resource flows to countries receiving humanitarian aid points to a vastly untapped potential for greater synergy across sectoral and financial instrument divides.

The contentious issue of social change deserves greater scrutiny to the extent that one cannot simply assume that development is transformative while principled humanitarian action would be purely conservative. Case studies on what works best in practice coupled with insights from cutting-edge research—in particular in behavioural sciences—are critical to build on the multiple, often inadvertent, interactions between each nexus’ facets to better address the needs and aspirations of people in protracted crises.

Gilles Carbonnier, Vice-President of the International Committee of the Red Cross and professor of economics at the Graduate Institute of International and Development Studies

[6] Some of these estimates rely on poor data and weak estimation techniques. The 2:1 ration figure comes from a EURODAD report: The State of Finance for Developing Countries, 2014.