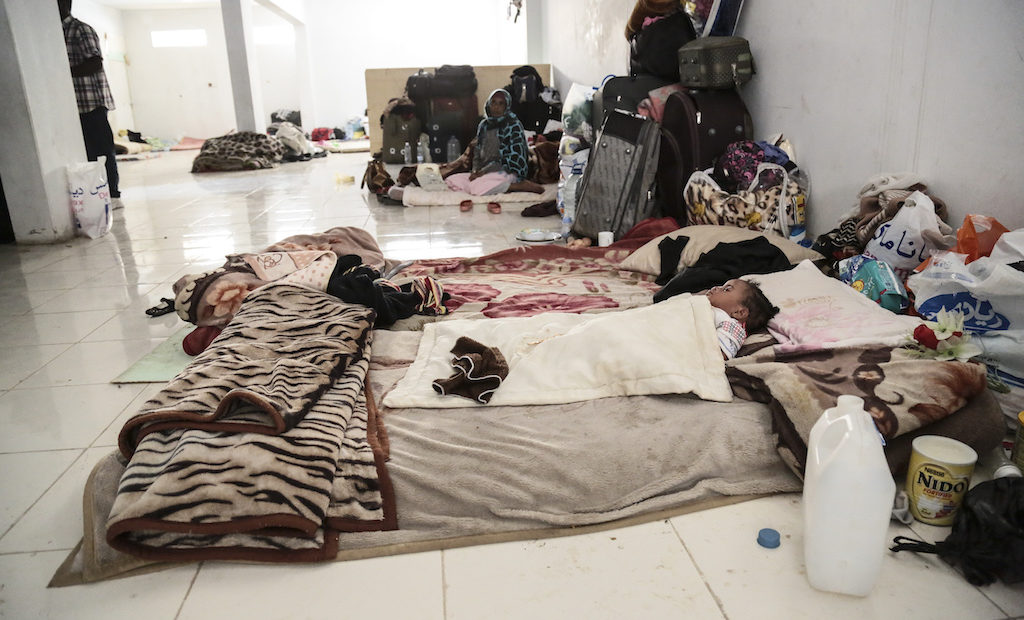 In the wake of the 2016 New York Declaration for Refugees and Migrants, this year marks the final phase of the process leading to the adoption of the Global Compact for Safe, Orderly and Regular Migration. As the international community gathers to respond to large-scale movements of people, the focus has been primarily on the departure of migrants from their countries of origin and on their arrival in countries of destination, notably in Europe and North America.[1] However, the challenges faced by migrants along the route, including in transit States or in third countries where they reside, is often overlooked. In particular, the plight of migrants caught in situations of armed conflict should not be forgotten.

Armed conflicts are a major driver of forced displacement and respect for international humanitarian law (IHL) can contribute to preventing and minimizing it. However, the role of IHL extends beyond its preventive role. Migrants, including those who left a safe place voluntarily, may find themselves living in or crossing through countries affected by conflict at different stages of their journey. In these situations, migrants, like the rest of the civilian population, endure great difficulties. As foreigners, however, they may face additional vulnerabilities, for instance in accessing basic services or being subjected to restrictions of personal liberty. For migrants caught in armed conflicts, IHL provides important legal protection and helps bridge protection and assistance gaps.

The following 4 key points highlight the relevance of IHL for migrants in these situations.

Although IHL does not contain specific rules about migration or about the protection of migrants as a category of persons, they are not left outside the scope of its rules. To determine their protection, migrants must be positioned within IHL rules. This means, first of all, classifying the type of conflict in which they find themselves and then secondly determining whether they are ‘civilians’ or ‘combatants’/’fighters’. As most migrants will be considered civilians under IHL, the rules providing protection to the civilian population will be the focus here (although migrants who are not civilians are also addressed by IHL).

Migrants are covered by IHL rules providing protection to the civilian population in both international and non-international armed conflicts. This protection is two-fold. First, migrants are entitled to protection from the effects of hostilities. Notably, this means that they, as civilians, cannot be targeted, unless and for such a time as they take a direct part in hostilities. It also means they are protected against indiscriminate attacks and the use of starvation as a method of warfare, among other rules. Second, like all civilians, migrants must be protected when in the power of a party to the conflict.

As a starting point, IHL requires that parties to a conflict treat all civilians without ‘adverse distinction’. Consequently, IHL confers protection on migrants, irrespective of whether they are considered ‘regular’ or ‘irregular’ migrants. Although, in certain instances, IHL rules do specifically provide for differentiated treatment, this is to address the different situations and needs of the individuals protected rather than to treat them adversely. Under customary IHL, the prohibited grounds of ‘adverse’ distinction include race, colour, religion, language and national origins, all of which may be relevant for migrants. Consequently, migrants who are civilians for the purposes of IHL should not be treated any differently than other civilians based on the sole fact that they are migrants.

The IHL regime governing protection in international armed conflicts is based on status. This means that, as civilians, migrants may enjoy differing layers of protection depending on whether they also qualify for the status of ‘protected persons’ and/or are considered ‘refugees’ as defined in the relevant treaties.

Migrants enjoy protection, first and foremost, under the general rules of IHL covering the civilian population contained in the Fourth Geneva Convention (GC IV) and in Additional Protocol I (AP I). These rules provide minimum safeguards against the ‘sufferings caused by war’ for all migrants—including nationals of an ‘enemy’ State—irrespective of their nationality (Part II of GC IV). Migrants may also be protected, for instance, by provisions relating to missing and dead persons (Part II, Section III of AP I), rules on relief in favour of the civilian population as well as on the treatment of persons in the power of a party to the conflict (Part IV, Sections II and III of AP I respectively). Importantly, migrants who do not benefit from more favourable treatment under the Geneva Conventions or AP I will, at the very least, be entitled to the fundamental guarantees contained in Article 75 of AP I, which are recognized as customary rules.

Beyond these rules, migrants may also enjoy special protection as aliens in the hands of a party to the conflict or an occupying power if they qualify as ‘protected persons’.[2] Here, the question of nationality is a key consideration. All migrants who qualify as ‘protected persons’ benefit from the more detailed and protective regime found in GC IV.[3]

Finally, migrants may also enjoy protection as ‘refugees’, within the meaning of IHL.[4] Refugees who classify as ‘protected persons’ in the territory of a party to the conflict enjoy special protection under Article 44 of GC IV. Refugees in occupied territory, who are not considered protected persons, are covered by Article 70(2) of GC IV. Moreover, where AP I applies, migrants who are not ‘protected persons’ under GC IV may nevertheless benefit from this protective regime if they (1) are considered refugees ‘under the relevant international instruments accepted by the Parties concerned or under the national legislation of the State of refuge or State of residence’ (2) ‘before the beginning of hostilities’ (Article 73 AP I).

3. In non-international armed conflicts all migrants not or no longer directly participating in hostilities are protected

Unlike in international armed conflicts, in non-international armed conflicts there is no protected person status and, as a result, nationality does not matter when determining protection under IHL. In this type of conflict, all persons—including migrants, who are not, or are no longer, directly participating in hostilities— are protected under the relevant provisions of IHL, namely Article 3 common to the Geneva Conventions, Additional Protocol II where it applies, and the relevant rules of customary IHL. Notably, these rules require humane treatment in all circumstances and without adverse distinction. They also require respect for fundamental guarantees. This includes the prohibitions on violence to life and person, outrages upon personal dignity and the passing of sentences without a fair trial.

4. A number of IHL rules may be particularly important in the context of migration

As seen, IHL provides important protection for migrants in armed conflicts. A number of rules are of particular relevance in the context of migration, including those governing the movement of civilians as well as those on family unity and on missing and dead migrants.

IHL rules related to the movement of civilians

The main aim of IHL is to seek to prevent or minimize the infliction of suffering. Respect for its rules, including those providing protection against the effects of hostilities, can prevent and minimize the displacement of civilians for reasons related to the armed conflict. When civilians are nonetheless displaced, IHL requires that they be protected and assisted, which may contribute to reducing the suffering of those displaced and facilitate their return home.

In addition, IHL contains a number of other rules that either impose limits on, or permit, the movement of migrants caught in armed conflicts. For instance, the right to leave, which applies in international armed conflicts, provides for the right of protected persons to leave the affected territory voluntarily at the outset of, or during, a conflict. This right may, however, be limited by the State if the departure is against its national interests. Furthermore, depending on the type of conflict and the particular circumstances, other limitations on the transfer of civilians include the prohibition of the forced displacement of civilians for reasons related to an armed conflict as well as the prohibition of refoulement[5].

IHL rules on family unity and missing and dead migrants

Migrants living or transiting through countries experiencing armed conflict often become separated from their families, go missing, or die. As a result, IHL rules relating to the respect for family life, the maintenance or re-establishment of family links, and the clarification of the fate and whereabouts of missing and dead migrants are especially important in the context of migration. Notably, parties to the conflict must take all feasible measures to account for persons reported missing as a result of armed conflict and to provide family members of missing persons with any information they have on their fate. It should be noted that the rules on accounting for missing persons and re-establishing family links may continue to apply beyond the end of an armed conflict.

When we consider how to respond to large-scale movements of people, we must not overlook the vulnerabilities that migrants may face when they find themselves in a third country affected by armed conflict. Indeed, a large part of today’s discussions focus on addressing the root causes of migration in countries of origin as well as the protection of migrants (or lack thereof) in countries of destination, rather than the needs of migrants caught in conflict. For these migrants, the rules of international humanitarian law provide important legal protection in situations of international and non-international armed conflicts, in addition to their protection under other applicable bodies of law.

The views expressed here are those of the authors and do not necessarily reflect the position of the International Committee of the Red Cross.

For a more in-depth discussion on this topic

[1] As an umbrella category, the term ‘migrant’ covers different categories of persons. It includes refugees and stateless persons, while recognizing the special protection they are entitled to under IHL (and other bodies of international law). The 2009 International Federation of the Red Cross and Red Crescent Societies, Policy on Migration describes migrants as ‘[p]ersons who leave or flee their habitual residence (…) to seek opportunities or safer and better prospects’.

[2] Based on the definition under Article 4 GC IV, those without a nationality, including stateless migrants, are considered ‘protected persons’.

[3] All ‘protected persons’ benefit from the guarantees found in Section I of GC IV. They are covered by additional rules depending on whether they are on the territory of a party to the conflict (Section II GC IV) or in occupied territory (Section III of GC IV).

[4] It is important to note here that although the term ‘refugee’ is not defined in GC IV, it is considered broader in scope than the definition found in the 1951 Geneva Convention relating to the Status of Refugees and its 1967 Protocol. In essence, what matters for the purposes of GC IV is that the person does not ‘enjoy the protection of any government’. All migrants meeting this criterion would be considered refugees under GC IV, regardless of their status under international refugee law.

[5] For international armed conflicts, see notably Article 45(4) of GC IV. In the ICRC’s view, in non-international armed conflicts the ‘categorical prohibitions’ contained in Article 3 to the Geneva Conventions are to be understood as also prohibiting transfers where an individual would be in danger of suffering a violation of the fundamental protections contained in this article upon transfer.     Beyond IHL, the principle of non-refoulement is found in International Refugee Law and International Human Rights Law. For further details see the recently published ICRC Note on Migration and the Principle of Non-Refoulement. See also Tilman Rodenhäuser, The principle of non-refoulement in the migration context: 5 key points (March 30, 2018) Humanitarian Law & Policy Blog.

‘What I know is that for me, for many, the war will not be over until more is done to restore us and ...