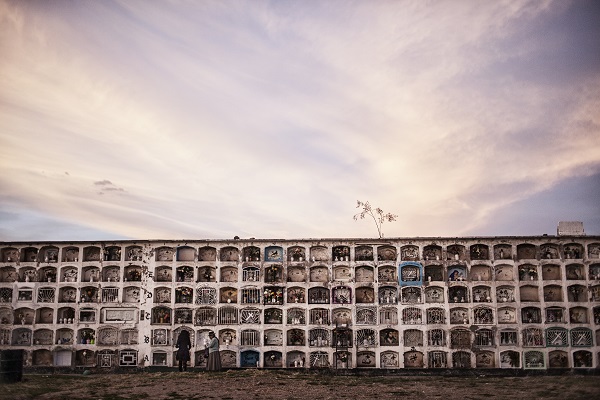 Ayacucho, central cemetery. People celebrate the Day of the Dead and honor their loved ones. Nadia Shira Cohen/ICRC

As the Day of the Dead is upon us, it gives me cause for reflection on what the dead have meant to me and continue to mean to me in my work as a forensic specialist. I see the respect and place that different societies give to the dead through their customs and in more formal ways through frameworks such as international law. Underlying this honor and respect for the dead is a recognition of human dignity. As a forensic specialist, I believe that our field can give the dead back a voice. Often silent victims of conflict, migration and disaster, they deserve to have their stories heard.

A thin line between the living and the dead

The dead are a subject that has captured my interest since I was a young child. Growing up in Ireland, I always thought of the dead as having a close relationship with the living. The Irish didn’t fear the dead, but saw them as an integral part of society.

There are two areas of Irish life where I remember this connection as being particularly strong. The first was, and still is, through the process of mourning. The Irish put a strong weight on the ritual of ‘waking’ the dead. The idea of simply burying the dead would still be seen as unusual in Irish society today. In the ceremony of ‘waking’ the dead, those who have recently passed are brought to the houses of their closest loved ones. They are kept there, pride of place in the house, during what is usually a two-day mourning period and, often also one of celebration. Drinks are had, songs sung and memories of their life shared. The community comes together to share the joy and pain associated with their death. This process is immortalized in the Irish folk song, Finnegan’s Wake, after which James Joyce named one of his greatest pieces of literature.

The second event that relates closely to death in Ireland is Halloween, which takes place on 31 October. However, let’s not confuse this with the commercialized ‘Trick or Treat’ extravaganza that now takes place annually in many countries around the world. Halloween has its roots in Samhain, an old Celtic festival that marked end of the harvest season and the beginning of winter. Around 1000 AD, Christians tried to replace Samhain with All Souls Day. Today, All Souls Day and All Saints Day form a two-day Christian festival. All Saints Day is also known as All Hallows Day and celebrated on 1 November. The traditional festival of Samhain fell on the eve of All Hollows Day and thus became known as All-Hallows Eve, and then eventually as Halloween.

Many of the traditions associated with Samhain were retained in Halloween. It was believed that at this time the veil between the world of the living and the dead was at its thinnest, and it was thought that the dead often would return to the world of the living for that short period. On this night families would set a place at the dinner table for a recently passed relative so that they could dine together. Many also feared visits from evil spirits. As a precaution, to ward off any such spirits they carved out turnips with scary faces and illuminated them. In my youth, I remember many evenings of playing games, hearing old tales and feeling a real connection with this festival.

In many ways these traditions made me view death with a growing sense of curiosity. It also instilled in me a sense that the dead never really leave us. They always have a place in our lives, even if only in a metaphysical sense.

Festivals such as Samhain, and close connections with the dead are not limited to Ireland. One need only look to Mexico and see the importance afforded to the Día de Muertos (the Day of the Dead). This festival has a much stronger association with the dead than Halloween does today in Ireland. The Day of the Dead is an opportunity for friends and family to honor their departed loved ones, to give offerings that help these loved ones along in their journey. Families go to the cemetery and share food and drinks with their departed loved ones. This tradition reflects the belief in many cultures that ‘the dead are still with us’ and remain an integral part of communities and society—a tradition now lost in many Western cultures.

The close relationship between the dead and living can also be seen in, for example, the Islamic legal tradition and cultures. Specific practices and ceremonies show the respect, honor and love for the dead. For instance, actions such as executing wills of the dead, providing dignified burials and visiting graves are individual duties for some and a collective duty on members of the community. The dead are not considered to be disconnected from us forever, but rather we will be united with them in the Afterlife.

Condemnation of desecration of the dead

There can be little doubt that the act of desecrating the dead is one roundly condemned in societies around the world. This can be seen in the obligations that are afforded the dead under varies bodies of law, in particular, international humanitarian law (IHL) and international criminal law. Desecration of the dead in armed conflicts frequently results in strong reactions. It is used to goad adversaries and to instill fear. An example of this today is in Iraq where there have been reports of mutilation of the dead by the Islamic State Group (ISIS) as well as reports that elements of the Iraqi army mutilated dead ISIS fighters.

The dead as a victim and the ICRC

IHL and international criminal law recognize the dead as a distinct category of victim, with relevant obligations towards them. The ICRC Forensic Unit honors deceased victims and their families by promoting the proper and dignified management of the dead, reminding concerned actors that the dead should have their identities returned to them, and that their remains should be returned to their families. With 50 forensic staff in the field and engagement in many contexts around the world, our exposure to how society approaches the issue of the dead has only gone to reinforce the view that the dead continue to play an important role in people’s lives, whether that be in ensuring that they are afforded the necessary dignity in death or in the process of giving someone back their identify.

Silent victims: The voice of the dead

What is it that leads us to place such a degree of importance on the dead? Why do we make such efforts to ensure a respectful resting place for those that have departed this life? I believe that the importance we place on the dead reflects our humanity at its very core.

The dead are the silent victims. It is for us to make it possible for their voice to come through. I have spent my whole working life confronting the dead, listening to their stories, and as a forensic practitioner, I believe we are given the responsibility to share those stories and be the voice of the dead. This is a responsibility that should not be taken lightly and one I feel privileged to have. We are the medium through which the dead can tell their stories and be reunited with their identity. The dead have had their voices taken from them. Few are able to broadcast their calls for help. I have always felt an obligation to speak for those who have no voice, whether that be people deprived of freedom, the silenced minorities or the dead.

Everyone deserves to have their voice heard.

Oran Finegan is head of forensics for the International Committee of the Red Cross. He oversees their global forensic strategy, which emphasizes furthering the area of Humanitarian Forensic Action, underlining the importance of the dead as a category of victims and supporting efforts to strengthen the institutions response to the issue of the Missing.