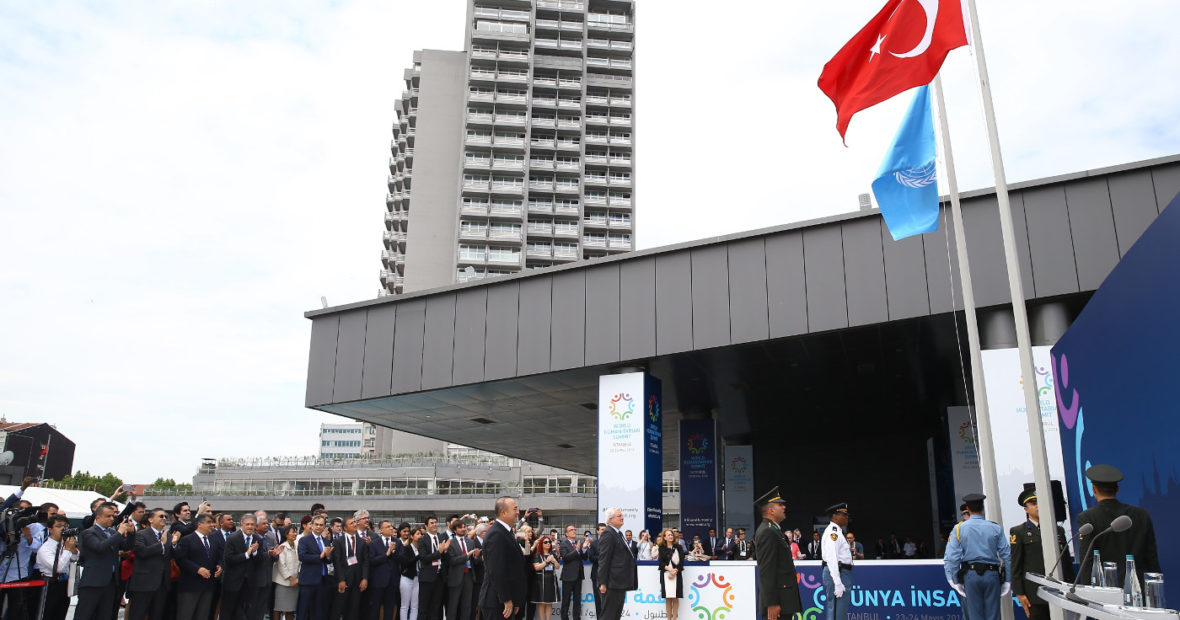 UN USG for Humanitarian Affairs and Emergency Relief, Stephen O'Brien and Minister of Foreign Affairs of Turkey, Mevlut Cavusoglu attend a ceremony at the Istanbul Congress Center on 21 May 2016. (Fatih Aktas/Anadolu Agency)

What can we expect from the upcoming World Humanitarian Summit in Istanbul, a first-of-its kind gathering of more than six thousand people representing States, international organizations, and NGOs? Can meaningful initiatives be conceived and agreed on when such a tremendous variety of stakeholders meet for two days at the Istanbul and Lüfti Kırdar congress centres?

To clarify and discuss the concerns and expectations surrounding the Summit beginning this Monday, HERE-Geneva held a panel discussion with the support of the ICRC, on 25 April at the Humanitarium in Geneva. The event was part of the ICRC Conference Cycle on “Generating respect for the law”.

Hugo Slim introduced the discussion by explaining the ICRC’s involvement in the Summit and the organization’s expectations about the outcomes. The ICRC has “been actively engaged for the last few years as the Summit has developed. We have played a big part in consultations [and] are very positive about the fact that we should have some major commitments and re-commitments to international humanitarian law, and to other very pressing humanitarian priorities of our day,” Slim stated.

The ICRC’s head of policy also raised a number of points of concern for the organization, starting with the reporting mechanism around the commitments of the Agenda for Humanity: “It is unlikely that the ICRC can commit if it involves reporting to the UN, which we cannot really do,” Slim reminded. The International Conference of the Red Cross Red Crescent Movement remains our primary way, and our privileged way of engaging with States and the Movement…” Slim also pointed at a real danger in humanitarian action not staying central to the Summit, but being subsumed into a broader developmental agenda. “We think there’s a lot of emphasis about ending people’s needs once and for all,” he warned, “but we would like to see a little more focus on the importance of impartial humanitarian action to meet people’s urgent needs.”

The opening was followed by an interactive discussion between the representatives of MSF, of the International Federation and of the government of Turkey on their expectations for the WHS, on the humanitarian principles, and on today’s key challenges for humanitarian action.

Looking at humanitarian financing, Jemilah Mahmood brought up the recently introduced concept of ‘Grand bargain’, which proposes that service providers who improve their efficiency would be rewarded with increased funding by donors, leading to a presumably more efficient aid system. Yet, we must also ask the question what this grand bargain will mean for the people affected, she stressed.

Speaking a few days before MSF’s unexpected and much-noticed pullout from the Summit, Bruno Jochum emphasized the ‘shared responsibilities’ of both humanitarian actors and States: for the former, the responsibility to be effective for the populations they serve, and to recognize the unabated importance of the humanitarian principles; for the latter, to uphold what they committed to several times. “We need States to reaffirm that the doctor of your enemy is not your enemy,” Jochum asserted.

Calling for better humanitarian leadership, Turkey’s representative Berk Baran highlighted how he “described the humanitarian crisis as a cruiser floating in the ocean full of affected people,” with different stakeholders trying to steer the ship towards a different port.

And yet this Monday, the ship sails to one unique waterway: that of Istanbul’s Golden Horn. Despite the amplitude of the gathering, “the Summit is not the end point,” Mahmood remarked. “It is not even the climax. I think the most important thing what happens afterwards, to make sure that we do see results happening.”