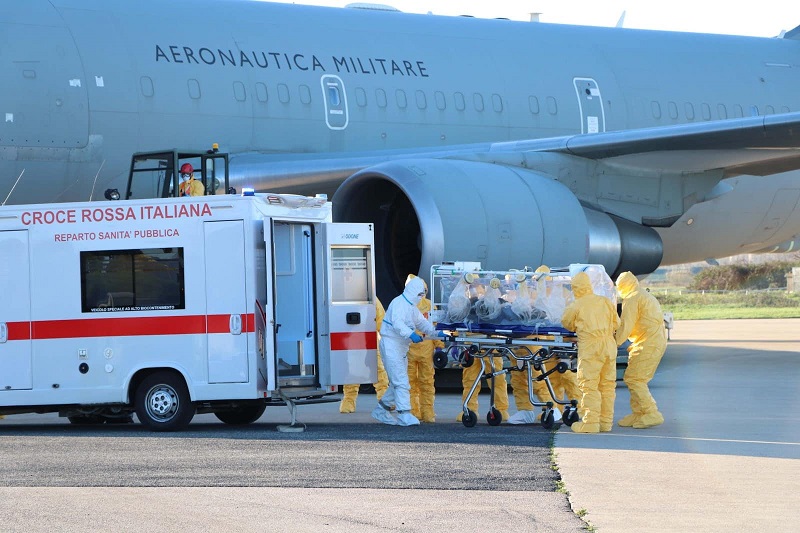 Shortly after COVID-19 reached Europe and North America, politicians, academics and journalists started adopting conflict terminology signifying a ‘war’ on the coronavirus, stressing the lethal nature of this unprecedented threat. In this blog, Adriano Iaria, Humanitarian Advocacy Officer of the Italian Red Cross, describes how this shift in our language could have dangerous consequences on the real frontlines of armed conflict.

ICRC Humanitarian Law & Policy Blog · We are not at ‘war’ with COVID-19: concerns from Italy’s ‘frontline’

The images are seared in our memories. Hospital hallways flooded with beds of critically ill patients. Coffins lined in neat rows, but no one allowed close enough to mourn the losses inside. Doctors clad in protective gear, collapsed against walls from physical and mental exhaustion. Italy was the first European country to experience a serious domestic outbreak of COVID-19. We have since been described repeatedly as the ‘frontline’ of the coronavirus pandemic.

Indeed, from where I sit on this frontline, I have noticed an unsettling trend. Every day, it seems, our collective efforts to combat the spread of this deadly disease are depicted in newspapers through the use of war metaphors. During an interview on national Italian television, the Italian Commissioner for COVID-19, Domenico Arcuri, reported that ‘we are at war and I have to find ammunition to make our country win this war sooner and better than the others’. ‘Health workers are in the trenches,’ reported the Italian trade unions. ‘We are at war’, declared French President Emmanuel Macron. On March 17, US President Donald Trump tweeted ‘The world is at war with a hidden enemy. WE WILL WIN!’

In a way, I understand this instinct. Using these metaphors helps people understand the gravity of the situation we are all experiencing: thousands of deaths, hundreds of them health workers, and all of them killed by a common ‘enemy’, an enemy that can strike at any moment and must be defeated.

There is also nothing new about this tactic. In the past, pandemics, catastrophes and other particularly harsh moments for humankind have been described by using a language of war. And just as our responses to pandemics and disasters have evolved with scientific advances, the consequences of war have been mitigated thanks to the progressive development of the law of armed conflict, international humanitarian law.

Unfortunately, the relief and mercy that international humanitarian law delivers in seeking to limit the effects of armed conflict does not fit with this narrative of an ‘all-out war’ on the faceless enemy of COVID-19. As Susan Sontag wrote in 1989 in her book, Illness as Metaphor & AIDS and Its Metaphors, ‘war-making is one of the few activities that people are not supposed to view “realistically”; that is, with an eye to expense and practical outcome. In all-out war, expenditure is all-out, unprudent . . . an emergency in which no sacrifice is excessive’.

I cannot stand by quietly while rivers of ink flow to describe this war against an invisible enemy. As a Humanitarian Advocacy Officer of the Italian Red Cross and as a member of the International Movement of the Red Cross and Red Crescent my job is to disseminate international humanitarian law and advocate for its respect. Yet at the very same moment the International Red Cross and Red Crescent Movement promotes the Health Care in Danger campaign reaffirming the neutrality and protection of health workers in armed conflicts, newspapers report on doctors, nurses and volunteers losing their lives as a natural consequence of their jobs ‘on the frontline’. The virus is seen as an enemy and there are no limits to eradicate it.

This sensationalist storytelling – wherein war has no rules, health workers are legitimate targets, and any means or methods can be used against the enemy – will affect our capacity to enhance the respect of the rule of law in armed conflicts. According to the laws of war, health care workers are protected, the right to choose means and methods of warfare is not unlimited, and ‘everyone, even the enemy, must be seen as a human and protected’. Hijacking the language of conflict in stemming a pandemic may, in the long run, affect the dictates of the public conscience in peace-time as well as war-time and, ultimately, our capacity to serve our mission to protect human dignity.

In A Memory of Solferino, Henry Dunant goes in great detail describing the acts of kindness by women and men alleviating human suffering in battle, no matter the citizenship of the combatants. Were he to visit again Brescia or Milan – some of Italy’s cities most affected by COVID-19 – Dunant would find similarly tragic inspiration ringing through the streets: tutti fratelli! Decision-makers and journalists should take this as a cue, commit to an internationalism of solidarity, and leave the language of war on the real frontlines.