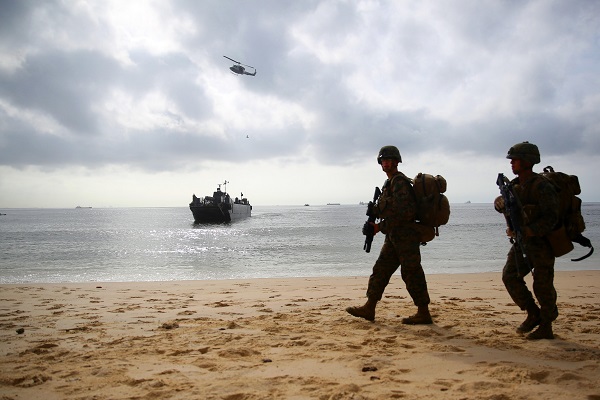 An international force of U.S., Dutch, Spanish, and British Marines performed an amphibious landing with Senegalese Armed Forces on the shores of Bel Air, 14 September, to kick off a multilateral training engagement in Thies as part of Africa Partnership Station 13. Sgt. Marco Mancha

In their previous blog on the topic of partnered warfare, ‘Fighting together: Obligations and opportunities in partnered warfare’, Cordula Droege and David Tuck acknowledged that today, States continue to support Parties—both State and non-State—to armed conflicts. Such support can engender or exacerbate the risks to persons affected by armed conflict and can, paradoxically, also provide opportunities to better ensure respect for international humanitarian law (IHL). In this two-part blog post, Droege and Tuck continue the discussion on partnering by elaborating selected legal considerations.

The first part of this two-part blog introduces the topic and outlines the implications of the provision of support to Parties to armed conflict for the applicability of IHL, also known as the ‘classification of armed conflict’.

Depending on the circumstances, State support to one or more of the Parties to an armed conflict may be unlawful under the established rules on State sovereignty, including the jus ad bellum that governs the legality of the resort to the use of force between States and the prohibition of interference in internal affairs.

This two-part blog post, however, limits its focus principally to the implications of State support for the applicability and application of IHL. Completely independent from the jus ad bellum, IHL is specifically adapted to the exigencies and particularities of armed conflict. IHL recognizes the reality of partnerships between the Parties to an armed conflict, such as co-belligerency in international armed conflict (IAC), but neither authorizes nor prohibits support to or between States or support to armed groups. It seeks only to limit the effects of armed conflict, protecting persons who are not or are no longer participating in hostilities and restricting the means and methods of warfare

Through the provision of support to one or more Parties to armed conflict, a State may itself become party to armed conflict and consequently bound by IHL. In all cases, States are required to exercise their influence over the Parties to a conflict to ensure respect for IHL. Moreover, under to the rules of State responsibility, a State may be liable for violations—including of IHL—committed by its partners or allies. Additionally, but beyond the scope of this blog, the provision of support could have implications for individual criminal liability as a consequence of aiding and abetting serious, criminalised violations of IHL: war crimes.

Notably, however, the legal framework in which States provide support to Parties to armed conflict is not only that of IHL. In fact, even those actors—State and non-State—that are embroiled in conflict perform functions that have no nexus to the conflict as such and that, consequently, are not governed by IHL. Domestic law and—acknowledging debate in respect of the extent to which it binds non-State armed groups per se—international human rights law set the framework for such activities. Therefore, it is unsound in law and potentially dangerous in practice to, for example, train and equip armed actors exclusively on the standards for the use force under IHL when, in fact, they engage—even if infrequently—in law enforcement activities.

Fighting together and international humanitarian law: Setting the legal framework

IHL governs the actions of all of the Parties—State and non-State—to armed conflict. In the context of partnering, the first question is therefore whether—and subject to what conditions— a State can become party to armed conflict by virtue of the support that it provides. The second, related question is whether that conflict would be non-international (NIAC), governed by the comparatively limited treaty law of Article 3 Common to the Geneva Conventions of 1949, customary IHL and, as applicable, the Second Additional Protocol of 1977; or whether it would be international, governed by the comprehensive framework of the Geneva Conventions, customary IHL and, as applicable, the First Additional Protocol.

It is well established that the existence of a NIAC—a conflict between a State and an armed group, or two or more such groups—is evidenced by the organisation of the Parties and the intensity of the confrontations between them.[1] An IAC, by contrast, ‘exists whenever there is a resort to armed force between States’. As the existence of armed conflict is a ‘determination made based on the facts’[2], a State will become party to an armed conflict every time the legal criteria has been fulfilled between it and one or more opposing parties, regardless of the purpose or objective of that State’s actions.

States contribute a variety of resources or services to other States that are party to armed conflicts, including in the framework of coalitions. Without directly engaging in hostilities, a State’s actions can enable warfighting by other coalition members. In such cases, even absent sufficient ‘intensity’ between it and an enemy armed group, the State that acts in support of a Party to an existing NIAC may become bound by IHL. In the ICRC’s view, a State may become party to an armed conflict by virtue of its contribution to the collective conduct of hostilities[3]: when its activities have—in contrast to the ‘mere’ provision of training or equipment—a direct impact on the enemy’s ability to carry out military operations. As a result, the State becomes bound by IHL exclusively in relation to the conflict to which it provides support. Notably, the applicability of IHL in this context proceeds on the basis that the ‘intensity’ of the violence between organized parties has already been categorically established[4].

Similar reasoning could apply in case of State support to one or more of the Party(ies) to an IAC. For instance, in a coalition of States acting against one or more other State(s) the pooling and marshalling their military capacities,[5] if it amounts to a resort to armed force between States, would by definition constitute an IAC to which IHL applies.

Notably, the applicability of IHL in this way has no direct correlation to—but does not preclude—State responsibility for others’ internationally wrongful acts. That is, a State that becomes bound by IHL on account of its contribution to the conduct of hostilities by other States is not necessarily responsible for their conduct. Rather, responsibility is determined, separately, by the law of State responsibility (see Part 2).

Conversely, attribution under the law of State responsibility has implications for the applicability of IHL. Today, States loan, second or embed their soldiers in the armed forces of other States. Under the rules of attribution in the law of state responsibility,[6] one State’s organs placed under the exclusive direction and control of another State are attributable only to the latter. Consequently, a State that loans its armed forces would not itself become party to the receiving State’s armed conflict(s)—whether NIAC or IAC—for this reason alone. Complicating matters, however, attribution is not an ‘either / or’ exercise: ‘Situations can also arise where the organ of one State acts on the joint instructions of its own and another State, or there may be a single entity which is a joint organ of several States. In these cases, [their conduct]… is attributable to both States.’[7]

In practice, attributing ‘embedded personnel’ can be complex. It requires assessing the nature of the command and control arrangements in place and is dependent upon the extent to which the loaning State has retained authority—and whether or not the receiving State enforces factual control—over the forces concerned. Ultimately, a State that loans its armed forces to another State will itself become bound by IHL where, first, those forces remain attributable to it in the circumstances and, second, they contribute to the collective conduct of hostilities in an existing conflict.

Finally, today, as in the past, States also support non-State armed groups. Such support raises questions about the legal test that defines the relationship between a State and the group(s) to which it provides support. This test can have implications for both the classification of armed conflict and the attribution of internationally wrongful acts (see Part 2).

With regard to the classification of conflict, international law foresees that a State’s ‘overall control’ of an armed group in NIAC against a second State renders the situation ‘entirely international in nature’[8]. Consequently, the IHL of IAC becomes applicable to the situation, including to the conduct of armed group members, as well as to their protection. Overall control exists where the State ‘has a role in organising, coordinating or planning the military actions of the [armed] group, in addition to financing, training and equipping or providing operational support to [it] .’ Unlike other standards of punctual, time-bound ‘control’ that are foreseen by international law (see the ensuing post regarding ‘effective control’), overall control best describes a prolonged relationship between a State and an armed group, which offers the consistency and predictability of the applicability of IHL that is required to enable the Parties to armed conflict—particularly their armed forces—to plan and execute their military operations.

Cordula Droege is the Chief of Staff for the President, International Committee of the Red Cross. She was previously the Head of Unit of the ICRC Legal Advisers to the Operations.

David Tuck is Legal Adviser to the Operations at the ICRC.

This article has been written in the personal capacity of the authors.

For the first post in Fighting together series, see