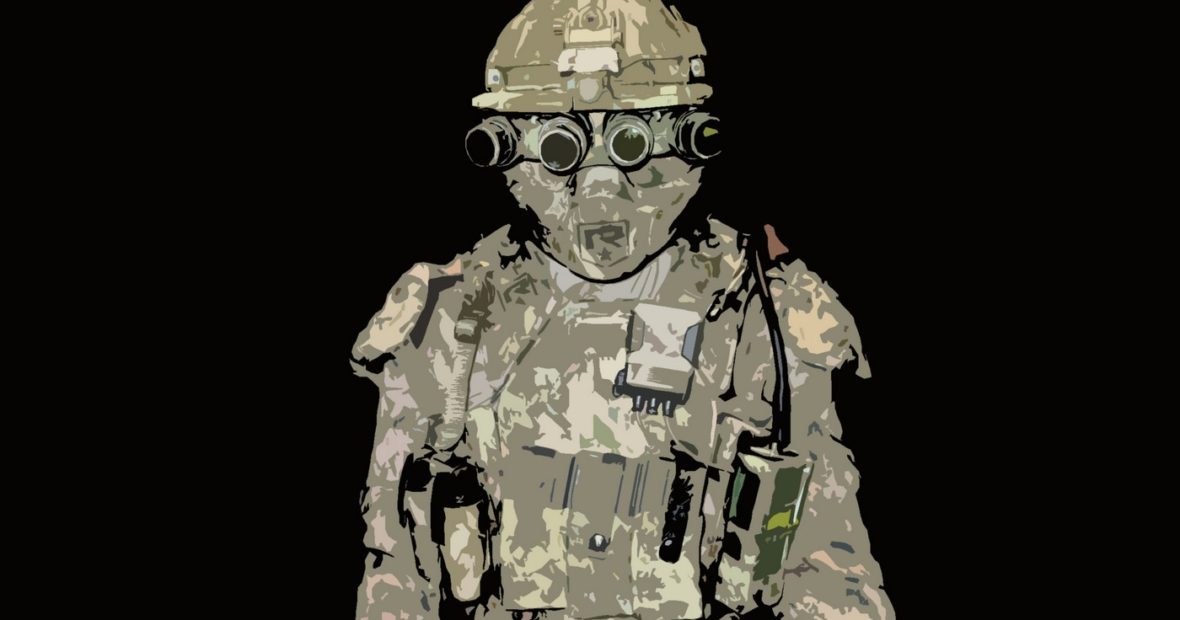 Modern technologies that actively seek to combine bio, nano, info and neuro elements can give us the ability to ‘enhance’ human beings in ways that we want. This ability—to make soldiers more capable of defeating their enemies and/or surviving the perils of conflict—is of great interest to militaries throughout the world.

Examples of technologies being researched at present include the following: exo-skeletons and prostheses for increasing strength and endurance; cognitive enhancements involving pharmaceuticals, electronic brain stimulation and other means to reduce the need to sleep and increase the ability to operate under stress. Some of the more extreme attempts at enhancement are based on the assumption that control over the peripheral nervous system could make it possible to ‘self-heal the body and mind’.

It should come as no surprise that this area of research—the transformation of human beings—that is beset with ethical complexities, and one that gives rise to various issues of humanitarian concern. Technological optimism about the military applications of such enhancement must not distract us from the necessity of giving consideration to these issues, which include: the possibility that human enhancement technologies might deliberately be put to malicious use, and the impact of such technologies on military personnel’s ability to follow the law of armed conflict.

Brain stimulation, cognitive enhancement and the law of armed conflict

A wide range of neurological research is directed towards developing military applications for human enhancement—to reduce the need for sleep, to increase the brain’s capacity to retrieve information pertinent to a specific mission, to assist in decision-making under stress, and so on. All these efforts are of great military interest.

Ethicists like Ingmar Persson and Julian Savulescu argue that there is an urgent need to enhance  human’s moral decision-making process, and that we ought to be using neurological technologies to do so. These aims are commendable, but changing a subject’s neurological processes can have various unwanted effects.

Direct neurostimulation by deep brain implants is a potentially useful means for treating people with Parkinson’s disease. But as Jens Clausen’s coverage of the neuroethics of deep brain stimulation shows, it has numerous unwanted side-effects: speech disturbance, memory impairment, increased aggression, hypomania, depression and suicide. It is important to recognize that the numbers vary across studies: 1.5-25% of research subjects displayed depression; increased aggression was observed in only 2% of the cases in one study.

However, enhancement in the military context can directly impact when and how one decides to apply potentially lethal violence. The unwanted effects in this case are not merely side-effects: they demand primary consideration. Decisions made during war are literally matters of life and death, and any enhancement to moral decision-making in warfare would surely be a welcome development. But, if any cognitive enhancement technology were to undermine the capacity of a subject to follow the law of armed conflict, it would be a source of very serious concern indeed.

Research into cognitive enhancement must take seriously any possibility or sign of an increase in rates of aggression, apathy and depression. Moreover, this research is required throughout the lifecycle of the technology, from laboratory to clinic to application in actual conflict.

Another issue of concern regarding certain enhancement technologies, and the research into them, is the potential for deliberate misuse. This is called a ‘dual-use problem’. It “arises in the context of research in the biological and other sciences as a consequence of the fact that one and the same piece of scientific research sometimes has the potential to be used for harm as well as for good.”

For instance, research that studies the biological bases of pain and stress might produce results of great military value: a soldier who can withstand pain and operate effectively under stress is a good end. However, that research could also be used for malicious ends: for instance, to develop weapons that cause excruciating pain, or to torture people.

It must be kept in mind that in dual-use research, the good motives of the original researchers are not definitive. That is, a full analysis of such research must also take into account the potential for others to maliciously misuse it.

Soldiers and the ethics of medical research

Finally, the soldiers themselves are subjects of humanitarian concern. Unlike most other professions, a core element of military service is obedience: a serving member of the military is expected to follow orders. Of course, there are limits to this: we would expect orders that violate the law of armed conflict to be resisted. But, by and large, when an order is given, those subject to it must follow it. The question is what impact this has on a soldier’s ability to give meaningful informed consent to participate in research and to receive enhancement technologies.

A foundational principle of medical ethics is that a subject of research or treatment can say no without cost to himself or herself. Moreover, the subject must be informed about the procedure, its impact and any potential conflicts of interest that the researcher may have.

The military context, however, is different from standard medical practice. If military service  inculcates a disposition to follow commands, then it must also undermine military personnel’s capacity to give consent freely. And, insofar as the research into and the application of enhancement technologies are conducted within a culture of assent, then the conditions around consent are—at the very least—complicated.

New military technologies might require secrecy. If one’s technological superiority can be maintained only by keeping a certain technology out of the hands of one’s adversary, it follows that that technology has to remain secret. Again, in contrast to standard medical context, this need for secrecy can have an impact on the ‘informed’ component of ‘informed consent’.

The military context is therefore a ‘special’ or ‘exceptional’ object of ethical inquiry, one that may be at odds with a universalist humanitarian approach to informed consent, and one where the principles of medical bioethics may have to be applied differently. For many researchers, all this may mean that informed consent must be entirely reconceptualized for the military context.

Dr Adam Henschke, applied ethicist, is a lecturer at the National Security College and at the Australian National University, and a research fellow with the Delft University of Technology. While he was a visiting researcher at the Brocher Foundation, his research was supported by the United Nations Institute for Disarmament Research. His expertise concerns ethical and philosophical analyses of information technology and its uses, military ethics and on relations between ethics and national security. The ideas expressed in this post are the author’s own.

Bearing in mind the recent scientific and technical progress regarding the means and methods of warfare, the ICRC has published an issue of the IRRC discussing the various ethical, legal, scientific and military challenges of contemporary technological developments and the concerns they raise for humanitarian law and action.