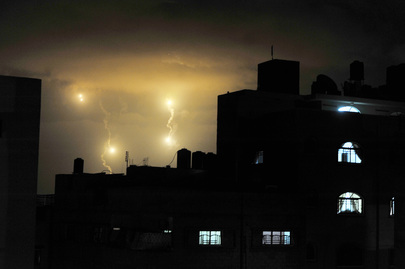 Today, the Protocols additional to the Geneva Conventions of 1949 turn 40. Looking at the road travelled and the way ahead, they stand more than ever before at the front line of contemporary conflicts, protecting civilians from the worst excesses of war and guiding parties to armed conflicts as they navigate new realities.

In the aftermath of World War II, the Charter of the United Nations (UN) was adopted and war was outlawed. It was believed that the newly created UN system would guarantee peace, and any effort towards the expansion of international humanitarian law (IHL) was perceived as a threat to this noble project. Some experts even suggested that “[w]ar having been outlawed, the regulation of its conduct has ceased to be relevant”.

As the rapidly growing East-West tensions rendered the possibility of a destructive armed conflict very likely once again, this post-war romantic – some would even say “naïve” –optimism rapidly gave way to a more pessimistic realism. Faced with this harsh reality, and with the UN incapacity to ensure peace in a short term, States met to discuss the need to refresh and develop IHL. Based on draft conventions prepared by the International Committee of the Red Cross (ICRC), the negotiations resulted in the adoption of four Conventions, each one aimed at protecting a specific category of victims or war: the wounded and sick, the shipwrecked, prisoners of war and the civilians.

Nuclear weapons at the frontline of considerations

Despite this major success, and even though indiscriminate aerial bombings had caused a tremendous amount of suffering among the civilian population during WWII, States could not agree on rules governing the conduct of hostilities. One of the main reasons for this failure was likely the problem of nuclear weapons. On the one hand, the United States had a monopoly over those weapons and were not ready to accept rules prohibiting their use, on the other hand, it was unconceivable for many other countries to discuss rules intended to regulate the methods and means of warfare without including atomic weapons in the negotiations. Short of an agreement on this issue, the 1949 Geneva Conventions were adopted without a comprehensive set of rules governing the conduct of hostilities.

Traditionally associated with the development of IHL, the ICRC did not wait long before engaging itself in a reflection to find a solution and insure better protection of civilians affected by armed conflicts. In 1956, draft rules for the limitation of the dangers incurred by the civilian population in time of war were elaborated with the help of international experts and submitted to the 19th International Conference of the Red Cross. Again, the project included the prohibition of the use of nuclear weapons and for this reason it did not progress further. Not only the United States – which had by that time lost its monopoly on nuclear weapons – but also most of the “new” nuclear powers were reluctant to enter into negotiations including atomic weapons. The main reason for this was the deterrent value attributed to the mere possession of such weapons, the famous “balance of terror” which was believed to prevent direct confrontations between the Superpowers in the midst of the Cold War.

However, war remained a sad reality all around the planet and conventional weapons proved to be more than sufficient in themselves to cause terrible suffering to the civilian population. This was evidenced by the massive bombing and the use of napalm in the Vietnam War. The reaffirmation and development of rules fixing limits to the conduct of hostilities was therefore felt by many as an urgent necessity.

A majority of States agreed that the question of weapons of mass destruction (nuclear, biological and chemical weapons) as a whole could not be tackled solely on the basis of prohibiting or restricting their use. Due to their implications for international security, issue had to be dealt with also through rules regulating their possession, transfer and eventual destruction. It became clear that the examination of those weapons had to be done within the disarmament framework and not during an IHL Diplomatic Conference. The obstacle posed by the controversial issue of WMDs eliminated, the door was open for a re-examination of the basic rules governing the conduct of hostilities.

A critical need to reaffirm and develop IHL rules

In 1974, the Swiss Federal Council convened a Diplomatic Conference on the reaffirmation and development of international humanitarian law applicable in armed conflicts. The main objective of this Conference was to update humanitarian principles and rules related to the conduct of hostilities, the majority of which dated as far back as 1907. Moreover, the applicability and the customary nature of those rules was not clear, in particular due to the fact that the World’s geopolitics had changed since 1907, notably with the creation of new States as a result of the decolonization of Asia and Africa. In addition, technological developments, along with the creation of new means of warfare, as well as the emergence of new issues such as the necessity to protect the environment, rendered necessary their adaptation and development. It is for that reason that the Conference was concerned by both the reaffirmation and the development of IHL.

The idea to start again from scratch was rejected. It was feared that important elements which had been heavily but successfully negotiated in 1949 would be weakened by a new negotiation taking place in what was a very tense and polarized political environment. For this reason it was decided to prepare “Additional Protocols” which would supplement the Geneva Conventions of 12 August 1949, while keeping the said Conventions unchanged. Draft protocols were prepared by the ICRC for the 1974-1977 Diplomatic Conference through consultations with experts from both governments and Red Cross/Red Crescent national societies – the first one supplementing the four Conventions for international armed conflicts, the second one building upon common article 3 of the Conventions for non-international armed conflicts –.

The Diplomatic Conference took place in Geneva in four sessions between 1974 and 1977. Despite the difficult political context in which it took place – around the end of the Vietnam War, in the midst of the Cold War – the Conference was a success. Simply going through the whole process, which culminated in the final adoption of the two Additional Protocols of 1977, was in itself a significant accomplishment. Failure would have been a serious blow to IHL, if not the beginning of the end of the noble idea to preserve a minimum of humanity in war.

Of course, everything is not perfect – not even close. Some provisions concerning the conduct of hostilities, such as the definition of the military objectives, the rule of proportionality and the notion of direct participation in hostilities, are still not perfectly clear, a situation which can impact their adequate application and respect.. Nevertheless, the overall result remains truly remarkable.

Today, the 1977 Protocols additional to the Geneva Conventions turn 40. For forty years, Additional Protocol I and II have been challenged and criticised, but they stood tall. Despite the changing nature of war, they have imposed – and continue to impose – essential limits on warfare. This success surely deserves recognition. However, the “celebration” of the 40th anniversary of the 1977 Additional Protocols has to be turned towards the future.

Today, the main challenge is not to develop IHL further, but to defend its fundamental principles. Far from being a threat to the achievement of world peace, IHL shares the same values, which include compassion for those who suffer, respect for human dignity and solidarity. Those values, which were deeply endangered, but so brightly defended, developed and most of all kept alive during the 1974-1977 negotiations, are not only essential to ensure and maintain a minimum of humanity in war, they also form the cement which should be used to build towards what is the greatest challenge faced by the new generations in this century: the establishment of a true and lasting peace on our planet. It is indeed only when the promise of world peace has been reached – and therefore the Geneva Conventions and their Additional Protocols cease to be relevant – that we can all truly celebrate.

The positions reflected in this article are the authors’ own.