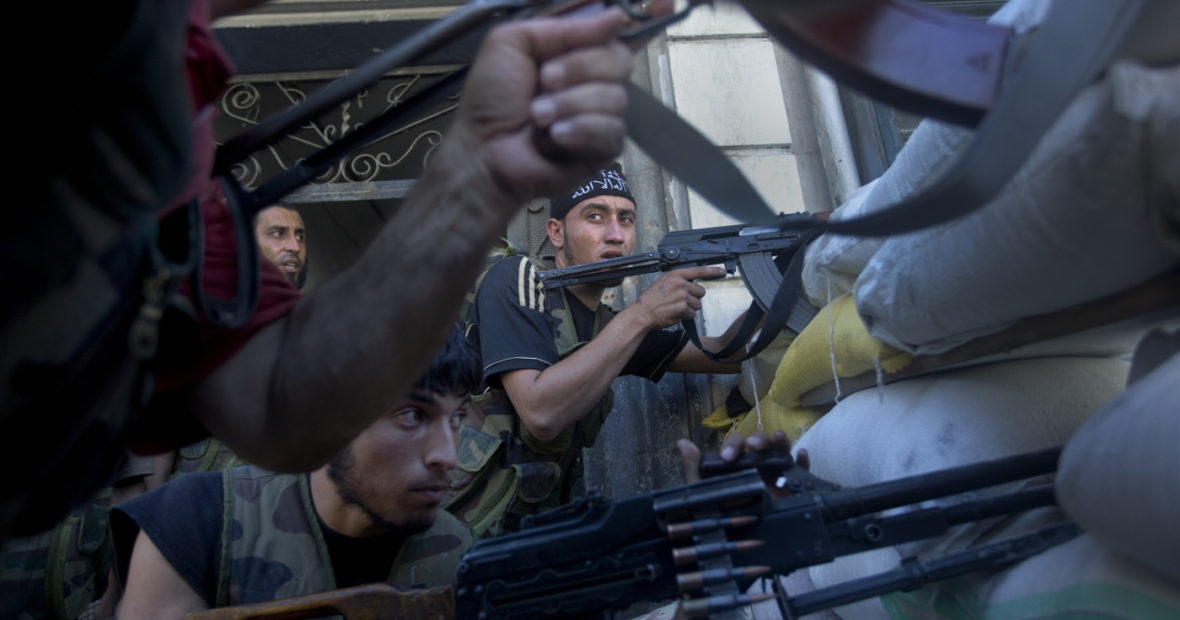 Combatants behind a barricade in Aleppo, Syria. (Ricardo Garcia Vilanova/ICRC, 2012)

An attacker can commit grave breaches of the Geneva Conventions, but the defender — who is in the best position to protect civilians — faces no such liability. By Prof. Eric Talbot Jensen, Professor of Law at Brigham Young University Law School.

The continuing urbanization of global populations has had a significant impact on the conduct of hostilities. Armed conflicts continue to rage in many places across the world, and urban areas are not immune from the dire effects of war.

In fact, as population and resource centers, armed forces and armed groups are increasingly drawn to these urban areas in order to sustain themselves and to inhibit the enemy, bringing with them the effects of hostilities on the civilian population.

War in cities affects the populations in numerous ways. As an inherently destructive activity, fighting in cities inevitably destroys or damages the infrastructure upon which the population’s survival, safety and comfort depends on. This potential destruction heightens the need for fighters to apply the principles of international humanitarian law (IHL), including the principle of distinction.

Separating military operations and targets from the civilian population is hard in almost any environment. The characteristic density of civilians and civilian objects in urban environments dramatically magnifies the risks to non-participants during hostilities.

The obligations of defenders under IHL

These obligations for defenders, routinely referred to a “passive precautions” or “Precautions Against the Effects of Attacks,” are codified in Article 58 of Additional Protocol I to the 1949 Geneva Conventions.

An attacker can commit a grave breach of the Geneva Conventions in at least five different ways, but the defender—who is in the best position to protect civilians — faces no such liability.

Even though limited to those actions which are feasible, the obligations placed on the defender are far from trivial. If defenders applied their obligations in good faith, it would certainly result in much needed protections to civilians in armed conflict, particularly in areas of urban conflict.

Two important steps could be taken by the international community to significantly enhance the actual protections civilians enjoy in urban areas.

First, the understanding of “feasibility” and what is “practicable” in current urbanized armed conflicts will have to expand, increasing the practical responsibilities on the defender, including through the use of modern and emerging technology.

Second, imposing criminal responsibility when appropriate and feasible precautions are not taken will rectify the perceived imbalance between responsibilities of the attacker and the defender.

It is clear that the standard for article 58, along with many other standards of international law, is that a defender must do what is feasible to comply with the obligation. A similar obligation applies to attackers with respect to many of their required “precautions,” but it is the defender who is most capable of taking feasible precautions and can effectively protect the civilians in urban areas.

During the negotiations of Article 58, it is clear that States were uneasy about the precautions required of the defender and clearly emphasized the requirement of feasibility. However, the ever-increasing urbanization of conflict is creating significant pressure on the doctrine of precautions in defense, stretching the “feasibility” standard beyond its capacity to adequately protect civilians.

As defenders continue to take only limited and ineffective steps to protect civilians, the true purpose behind article 58 is neglected and civilians bear the brunt of non-compliance with the law of armed conflict. In order to more adequately protect civilians during war in cities, the feasibility of defenders’ actions should reflect the changing urban circumstances.

The emergence of advancing technology provides a mechanism for defenders to more easily and more fully comply with their obligations to segregate or protect the civilian population. Technologies such as advanced sensors, communications devices, and visual and olfactory markers offer relatively inexpensive and potentially very effective means to warn, segregate, and protect the civilian population in urban environments.

Unfortunately, many defenders are unlikely to take such steps unless incentivized to do so by some external stimulus. Attaching individual criminal liability to a defender who fails to take feasible precautions in the defense would be one way to provide that incentive.

A current imbalance in individual criminal responsibility exists, where an attacker can commit a grave breach of the Geneva Conventions in at least five different ways, but the defender who is in the best position to protect civilians in urban environments faces no such liability.

While implementing individual criminal responsibility for defenders would certainly be an evolution of the law from its current application, existing and emerging technology provides the defender with a multitude of options that directly expand the “feasibility” of precautions in the defense and enable him to more aggressively fulfill his obligations. Failure to utilize these emerging technologies, when accessible, should lead to criminal responsibility.

If the international community is serious about trying to address the dangers to civilians inherent in war in cities, it must consider the role of the defender. Through adjusting the understanding of “feasibility” to account for the defender’s ability and emerging technological capability to protect civilians in urban areas, and then enforcing that understanding through individual criminal liability, States will take a major step forward.

Noting the growing trend of the urbanization of armed conflict, the International Committee of the Red Cross (ICRC) recently launched a new conference series on “War in Cities”. The ICRC hopes to draw the attention of national authorities and key humanitarian actors to the plight of these urban populations and to reinforce the great need for the application of IHL in urban armed conflicts. This invaluable initiative will hopefully result in greater focus among the international community on the difficulty of the problem and a reexamination of methodologies to ensure the application of IHL in ways that protect urbanized civilian populations.

This post is adapted from Prof. Jensen’s article “Precautions against the effects of attacks in urban areas”, for the upcoming edition of the International Review of the Red Cross on “War in Cities”.