When a conflict ends, mines and ‘explosive remnants of war’ like unexploded bombs, shells and cluster-munition bomblets continue to kill and maim. The curse has a name: weapon contamination. It deprives people of water, firewood, farmland, health care and education and it impedes relief work.

Even after a conflict ends, mines and such ‘explosive remnants of war’ as unexploded bombs, shells and cluster-munition bomblets continue to kill and maim. This deadly problem has a name: weapon contamination. It deprives entire populations of water, firewood, farmland, health care and education. It impedes relief work, depriving people of humanitarian aid and aggravating humanitarian problems. 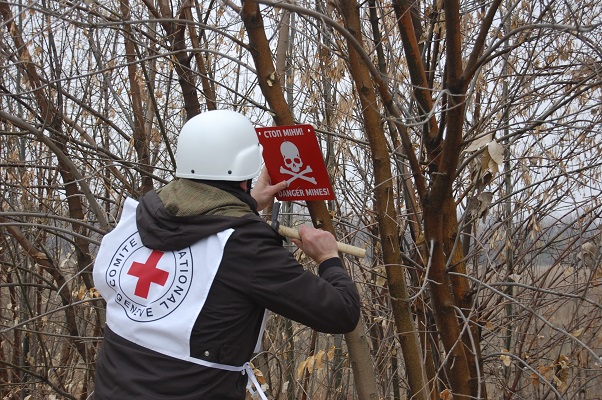 An ICRC employee is installing a mine awareness sign.

Exactly what the ICRC does to prevent accidents and reduce the effects of weapon contamination depends on the context, but our work generally includes a combination of the following:

Data gathering and analysis
Collecting and analysing data from weapon-contaminated areas is the basis of all planning. Once the ICRC has analysed the data, it uses the results to identify dangerous areas and to plan and prioritize its survey, clearance, risk-reduction and risk-education activities.

Almost every country in the world has a Red Cross or Red Crescent Society. These National Societies are often uniquely placed to gather weapon contamination data. Short-term, they frequently gather data as operational partners of the ICRC. Long-term, data gathering normally forms part of an overall national mine-action strategy, generally led by the government of the territory affected.

The ICRC leads the Red Cross and Red Crescent Movement’s action on weapon contamination. It helps National Societies build up their capabilities in this field and ensures that their activities are in line with best practice and international standards. The ICRC is developing tools such as the Information Management System for Mine Action (IMSMA) and the International Mine Action Standards (IMAS), which cover data collection, storage and analysis.

Risk reduction
In countries where war has disrupted society and the economy, people are often forced to enter weapon-contaminated areas to farm, collect water and firewood, graze livestock, or travel. Until an area is cleared, it is possible to reduce accidents by providing safer alternatives. One way of providing alternatives is to run economic security and water/habitat programmes that take account of weapon contamination.

The aim is to ensure that people do not have to take risks in order to survive or to lead a normal life.

• raising awareness in emergencies;
• changing longer-term behaviour;
• giving communities the central role in deciding which areas should be cleared first.

Normally, awareness-raising should be based on the community and linked to risk reduction. However, the ICRC sometimes carries out just awareness-raising activities, in emergency situations where little data exists and people are unfamiliar with the problem and how to react to it. This might be the case immediately after a conflict, when displaced persons are returning to their homes quickly. Experience has shown that this is when the largest number of people are killed and injured by mines and unexploded ordnance.

How best to raise awareness depends on cultural and social factors and on the nature of the threat. But the aim is always the same – to reach those civilians most at risk. The ICRC rarely uses one-way communication as a means of awareness-raising. The organization only uses materials such as posters to reinforce the message. An interactive, community-led approach has proved to be the most effective. Red Cross and Red Crescent volunteers are members of their communities and are in the best position to explain the problems of a particular community to agencies undertaking mine action. Community liaison is another aspect of the long-term role that a National Society should play within a sustained national mine-action strategy.

Survey and clearance
Immediately following the end of hostilities, the ICRC is often on the ground before other organizations are able to set up and begin working. In such situations, unexploded or badly stored explosive remnants of war can present a serious threat both to the local population and to ICRC teams. Depending on the context, teams can deploy as part of the ICRC’s rapid deployment plan, or work directly with delegations. Clearance teams provide technical analysis and needs assessment, and remove or destroy items in contaminated areas. ICRC teams are able to clear and make safe key buildings and infrastructure such as hospitals, schools, and water pumping stations, to allow post-conflict rehabilitation to start and essential services to be restored. If clearance is not possible, or not an immediate priority, these teams can mark off dangerous areas and warn people not to enter them. The ICRC – owing to its wide acceptance in the field, its neutrality and its independence – can access areas that are off-limits to other organizations.