The ICRC works closely with the National Red Cross and Red Crescent Societies and with their International Federation in order to ensure a concerted, rational and rapid humanitarian response to the needs of the victims of armed conflict or any other situation of internal violence. The International Red Cross and Red Crescent Movement is the largest humanitarian network in the world. It operates as a neutral and independent organization with a view to assisting all victims. 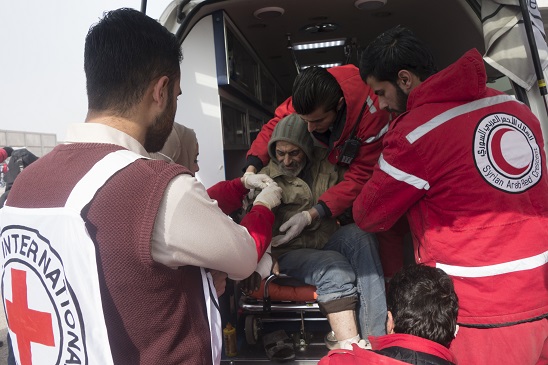 Cooperation between the ICRC and the Syrian Arab Red Crescent Society

Cooperation is one of the four pillars of ICRC action, the others being protection, assistance and prevention. There are four aspects to cooperation:

Operational cooperation
In a country affected by armed conflict, the ICRC and that country’s National Society − the ICRC’s principal partner − pool their operational resources. In addition to dealing with emergencies, the purpose of the partnership is to enable the National Society to better address the needs of the most vulnerable people.

This type of cooperation can also include National Societies which wish to operate outside their own countries in contexts where the ICRC is working. In this case, the Societies can contribute to ICRC operations:

• by managing projects which the ICRC delegates to them entirely;
• by making a financial contribution towards ICRC operations;
• by making donations in kind or
• by lending staff.

Coordinating the Movement’s components
In accordance with the distribution of roles within the Movement that has been agreed to by all components, the ICRC is the lead agency in situations of conflict or internal violence. This means that in addition to organizing its own operations the ICRC coordinates the activities of other components operating in the country, thereby maximizing complementarity of mandates and skills.

The organization is also in charge of contacts with the parties to the conflict, the aim being to ensure access to all victims and to provide clear security and communication rules for all components of the Movement involved.

National Society capacity-building
Thanks to its operational know-how, the ICRC passes on its expertise in the following fields to the National Societies in accordance with its statutory mandate:

• promotion of international humanitarian law and of the Movement’s Fundamental Principles;
• emergency aid and health care for those affected by conflict;
• restoring family links;
• mine-hazard awareness education;
• measures to strengthen the legal bases and statutes of the National Societies.

The ICRC plans its National Society capacity-building programmes in collaboration with the International Federation of Red Cross and Red Crescent Societies, which is responsible for coordinating this type of support.

Since the National Societies each have their own development plans, the ICRC respects their working methods and local customs when working with them. Capacities can be strengthened both in peacetime and during armed conflict.

Cooperation in devising Movement policies
As the founding organ of the Movement, the ICRC takes an active part in designing and implementing policies for the Movement which are adopted at statutory meetings such as the Council of Delegates and the International Conference of the Red Cross and Red Crescent Movement.