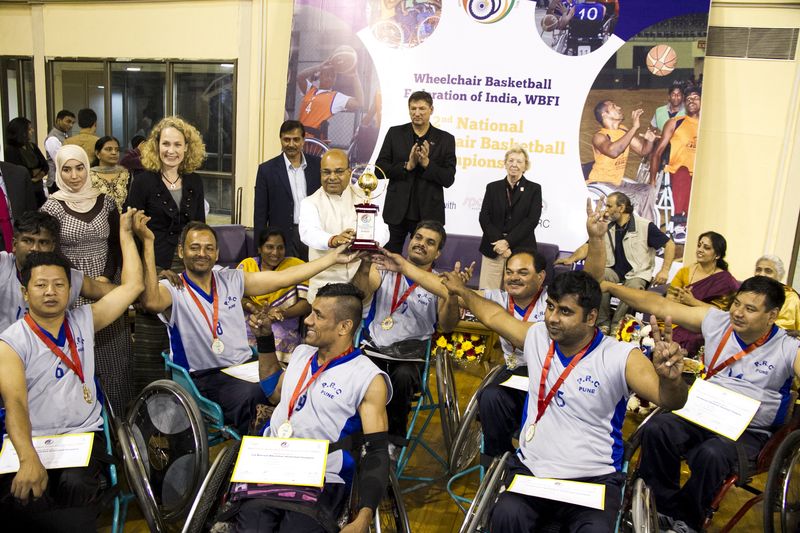 Minister of Social Justice and Empowerment Shri Thaawar Chand Gehlot, along with Ms Mary Werntz, Head of the Regional Delegation of the ICRC in New Delhi, presenting the trophy to Team Maharashtra for winning the 2nd National Wheelchair Basketball Championship in New Delhi on Sunday. ©ICRC, Ashish Bhatia

Team Maharashtra have emerged winners of this year’s 2nd National Wheelchair Basketball Championship. They defeated Team Punjab to clinch the coveted trophy which was presented to them by the Union Minister for Social Justice and Empowerment, Shri Thaawar Chand Gehlot.

The competition which opened on the eve of the International Day of People with Disabilities and lasted from 2-6 December 2015, featured nine States from across the country. They are J&K, Haryana, Punjab, U.P., Maharashtra, Delhi, Karnataka, Tamil Nadu and Kerala. The semi-final and final matches played on 6th December featured four of the strongest contenders for the title, while Tamil Nadu beat Delhi for the third spot.

Minister of Social Justice and Empowerment Shri Thaawar Chand Gehlot, who was the chief guest at the finals of the Championship on Sunday, applauded the players’ spirited display of performance and inner strength.

“The Indian government as well as state governments will give all support to the players for the development of this sport in the country. Today, these players have truly inspired all of us. I assure that we will provide opportunities to each one of you and fully equip you so that you can further develop your game,” the Minister said.

Recalling his days in the US, Javed Abidi, the Global Chair of Disabled People International, said as a student there, his university regularly organised wheelchair basketball tournaments and ever since he came back to India, he had always wondered why there was no such sports here. “It’s a dream come true for me to see wheelchair basketball in India. I congratulate the Red Cross and all the partners for this.” 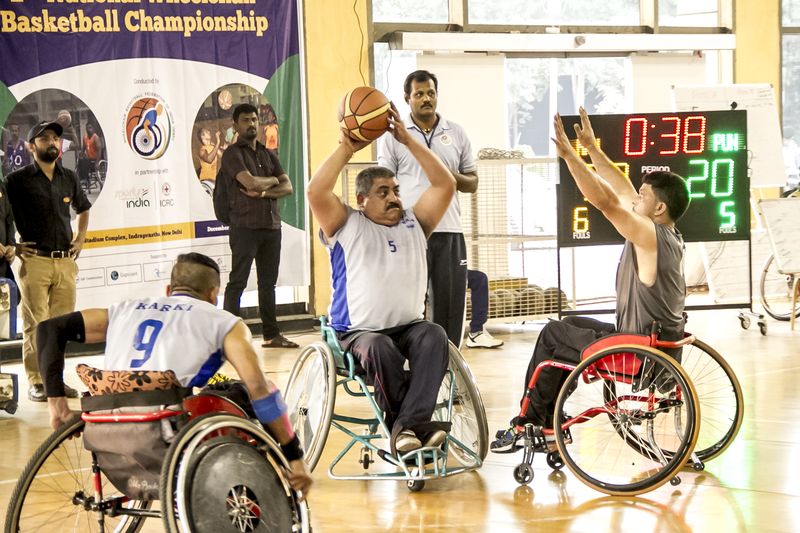 Addressing the athletes, Ulf Mehrens, the President of the International Wheelchair Basketball Federation, told them that they would have the benefit of joining a vast global network of basketball players and through such interaction, their skills and knowledge of the game would increase. He ended by saying that he looked forward to seeing Indian players participate in the Olympics.

Also speaking on the occasion, Ms. Mary Werntz, Head of the Regional Delegation of the ICRC in India, expressed the view that “While the rehabilitative influence of sport on physical well-being is well understood, its contribution to good mental health and social inclusion are very important dimensions that have not been fully recognized.” She therefore called for an intensification of the promotion of sports among persons with disabilities in India.

Expressing appreciation to everyone who contributed to making the Championship a success, Mary Werntz, Head of ICRC New Delhi delegation, underlined the significance of sports as a vehicle for social inclusion for persons with disabilities and assured the Wheelchair Basketball Federation of India, of the continued support of the ICRC in its noble efforts to develop the game in the country.

More on the tournament: