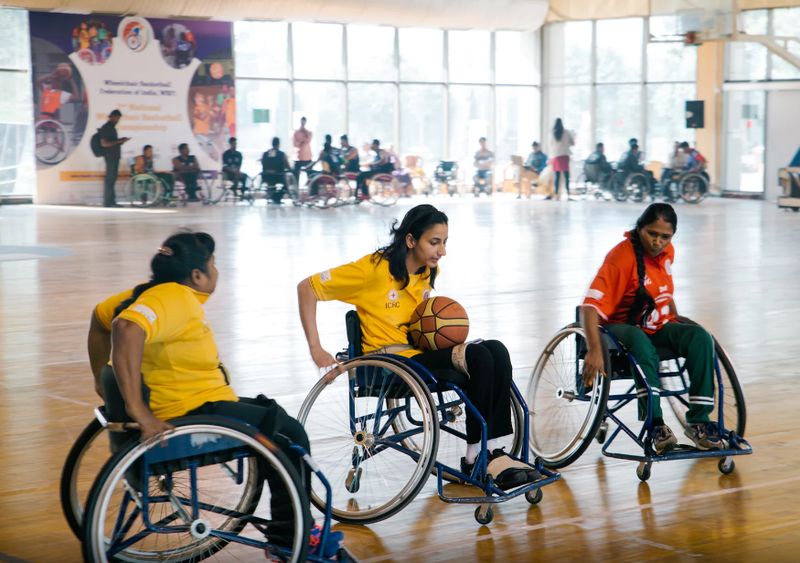 Tasneem Fatima (centre) during a match at the 2nd National Wheelchair Basketball Championship in Delhi in 2015. ©Srikkanth

On the occasion of International Day of Persons with Disability, here is a piece written by Tasneem Fatima, national wheelchair basketball player and the president of Delhi State Wheelchair Basketball Association, in which she shares her experience and thoughts on social inclusion of persons with disability through sports. Happy reading!

A lot changed for me in the last few years after an accident put me in a wheelchair. For one, I, who had never played any sports earlier, am now a national-level champion of wheelchair basketball and the founder-president of the Delhi State Wheelchair Basketball Association (DSWBA). This Disability Day, I wish to tell you about my journey as a sportsperson and how it has helped heal my spirit.

Four months after my injury, after some gentle prodding from my brother, Javed Ali, I signed up for wheelchair basketball training at the Indian Spinal Injury Centre in New Delhi. Javed, who is himself a sportsperson, knew exactly how playing a sport could help restore my confidence and belief in my abilities. On the other hand, for me, this is a realisation that keeps getting reaffirmed every single moment that I spend on the court.

At first, I agreed to check out wheelchair basketball because I was plain curious. How could someone on a wheelchair play a sport that entails so much agility, let alone lob a ball through a hoop that is 10 feet high? Imagine my amazement the first time I saw a team of wheelchair basketball players moving about the court with speed and skill, dribbling the ball deftly and executing perfect shots. That was when I knew I had to give it a try, no matter how it turned out for me later. 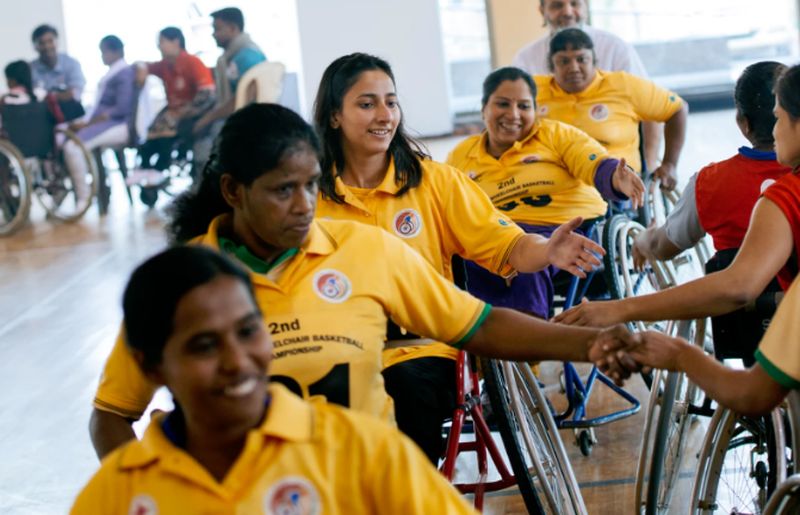 National wheelchair basketball player, Tasneem Fatima (third from front), started playing after her injury one and a half years ago. ©Srikkanth

The first days of training and the many practice matches that followed were dauntingly difficult – only when I got on to the court did I realise that it was a lot harder than it had seemed when I was watching from the stands. I struggled to learn the game. But the boys I had started training with – there were no girls then — seemed to breeze through the game. Of course, some of them had been playing for years. The key factor, however, was that they weren’t afraid of falling down like I was. My fear was holding me up. I resolved to get past it, and the encouragement of my fellow sportspersons and my family helped. I was soon getting better at the game.

The boys I used to practice with became my team-mates and rivals. As our practice gained pace, I gained confidence. Soon, my big break came. The 2nd National Wheelchair Basketball Championship – organised by the Wheelchair Basketball Federation of India and the ICRC – was held in Delhi last year, and there I was, competing with and alongside some of the best players in the country. Winning a medal at the championship will remain one of my most cherished memories.

Soon after, my brother and I decided to form the Association in Delhi to address the basic problems faced by people with disabilities in accessing sports facilities, playing and participating in sporting events. DSWBA conducted a training camp in September this year where we were able to provide free accommodation, food and transportation to the players. Recently, we even organised the first state championship of Delhi where an exhibition match was also held between our national team and that of Nepal.

World Disability Day — Looking Back at Stories of Courage and Inspiration