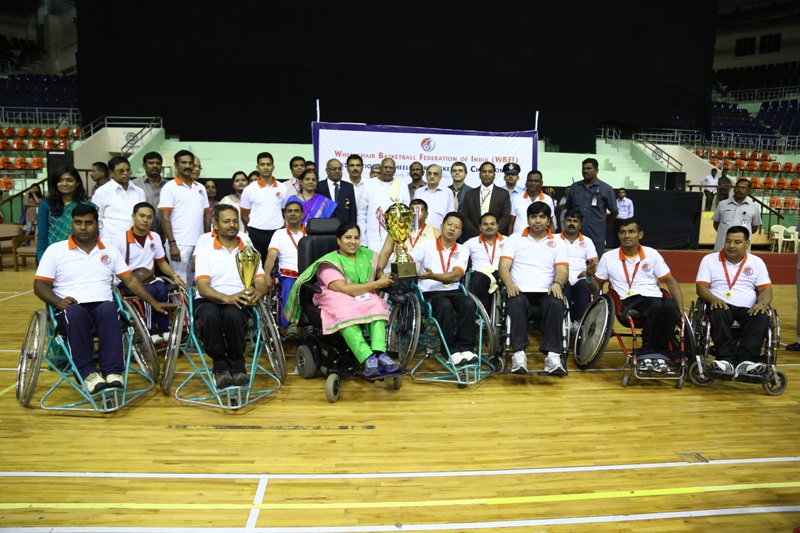 The Maharashtra team with the trophy and Ms Madhavi Latha, president of WBFI. Also seen in the photograph is Dr K Rosaiah, Governor of Tamil Nadu. ©ICRC / Ashirbad Raha

Iron-willed hands rolling wheelchairs at electrifying speed; thundering applause echoing in the stadium; spirits high as teams from Maharashtra and Delhi clashed in the finals of the first-ever wheelchair basketball tournament in India — on 20 December, the Jawaharlal Nehru Indore Stadium in Chennai was witness to all this and more. It was witness to the extraordinary resilience and determination of players from 10 teams and five Indian states, all of whom shed sweat and tears in their month-long journey with international coaches to hone their skills and put up a nail-biting finish in their bid to cinch the trophy.

The final match of the National Wheelchair Basketball Championship was won by a team of war veterans from Maharashtra playing against a high-spirited team from Delhi, but every player who participated in the championship was a winner in his or her own right. A D Parera, a 71-year-old war veteran and the captain of the winning team, said: “This is the first-ever wheelchair basketball championship organized in India and I am very happy that the game has been taken to a new level.”

The tournament was organised as part of a month-long initiative by the International Committee of the Red Cross (ICRC) in partnership with the Wheelchair Basketball Federation of India (WBFI), Chennai; Choice International, UK; Yes We Too Can (YWTC) Charitable Trust, Chennai; and other local partners. A series of disability sports workshops on wheelchair basketball and boccia were held across across India — Delhi, Kothamangalam (Kerala), Vellore (Tamil Nadu), Bengaluru, Pune and Chennai — from 5-24 December 2014. National and international coaches and trainers including Jess Markt of the US, Mark Walker from Australia, Mike Rosenkrantzshah from Nepal, Manoj Soma from the UK and Aram Voerman from the Netherlands helped the players improve their skills. 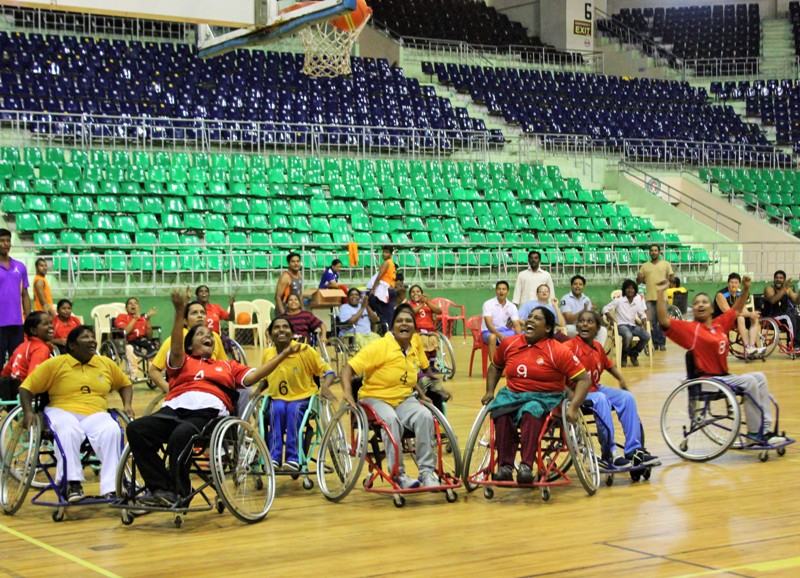 The workshop series concluded with three championship matches — for corporates, consulates and interstate matches — in Chennai. The interstate championship had league teams divided into two groups that played the finals on 20 December, after having qualified the knockout games. Prior to the finals, the teams from Pune and Delhi played against each other for the finals of the league championship, which was won by Pune. Two all-women teams also played in the Women’s Championship.

The initiative, which sought to promote social inclusion through disability sports, was a great success. The workshops in different Indian cities preceding the championship matches attracted enthusiastic participation by wheelchair basketball players from all walks of life. Robertangelo Ciccone, manager of the Physical Rehabilitation Project of the ICRC, said: “Disability sports as a means for social inclusion plays two main fundamental roles — it’s a great motivator for wheelchair users to find a new meaning to their life and it acts as a catalyst in helping the society at large change its perception of disability by overcoming social, cultural and geographical barriers.”

The game helps increase the confidence of players and helps them connect with the mainstream, resulting in attitudinal shifts, said coach Manoj Soma, who is also the CEO of Choice International, UK. “Winning medals and going to the Paralympic Games is one part of the story, but the aim of this entire exercise is also to see the perception and attitude of the non-disabled towards the disabled change.”

Apart from using basketball as a means to install self-esteem and confidence among those in the wheelchair, the long-term goal of the initiative is to create a framework for increasing opportunities for persons with disabilities in India to participate in sports. It is also aimed at identifying opportunities for increasing India’s representation at the Rio 2016 and Tokyo 2020 Paralympic Games. Madhavi Latha, president of the WBFI, said, “India has never participated in any team sport in international paralympic games. The goal of organizing these workshops and the championship was to make wheelchair basketball a competitive sport. We are developing a roadmap for this movement to reach entire India in the next five years.”

Beyond the game, the medals and the trophy, the life-changing impact of the workshops and the championship on the players was the biggest achievement of the exercise. Alphonsa Thomas, resident of Tharuthal village of Idukki district in Kerala captured it best when she said, “The magic that whistles and claps can do for the confidence of players is beyond words.”

For more on the initiative, follow the links below:

It’s all in the game: Sports can help remove the ‘distinction of disability’