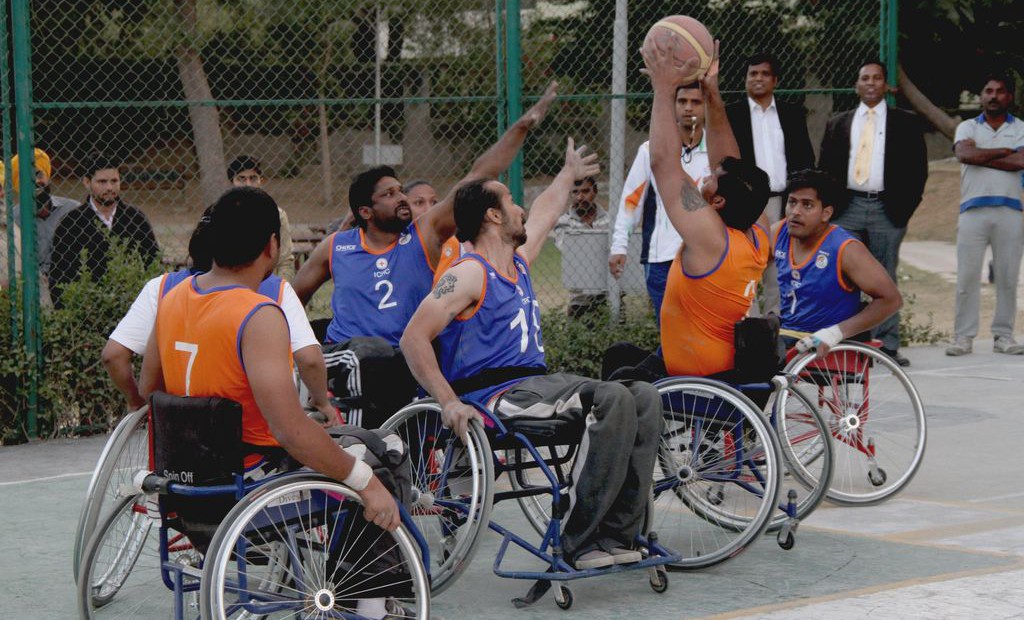 WBFI, ICRC, Choice International and other partners organise wheelchair basketball match and roundtable conference in Delhi as part of a month-long initiative to promote disability sports in India

“Wheelchair basketball has the ability to remove the distinction of disability,” said coach Jess Markt to resounding claps by the participants of a stimulating roundtable conference on disability sports in India, held at the Indian Spinal Injuries Centre (ISIC), New Delhi, on 10 December. 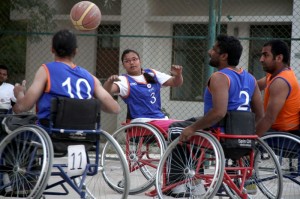 And rightly so. The 10 young men and women who played a friendly wheelchair basketball match as part of teams Blue and Orange ahead of the roundtable are athletes first, both on and off the field. Their sport has enabled them to overcome their impairment to a large degree by improving their health and confidence. For some of them, wheelchair basketball is a passion, while for others, it’s their livelihood. During the hour-long match — in which Team Orange beat Team Blue 12-2 — the players gave their best to the game as onlookers cheered them on. The players, who come from various walks of life and from cities and villages across India, are all living with some degree of disability caused either by accident or by disease. Take Devesh, for instance, who injured his spine three years ago in an accident, restricting his mobility. The young man in his 20s, who hails from Amritsar, loves sport and missed it sorely until he discovered wheelchair basketball. Now, he’s happy he’s back to playing, albeit on two wheels. “Every day when I wake up, I have something to look forward to. I used to miss this since my injury three years ago. Playing the game makes me happy,” he said. Incidentally, Devesh notched the lone basket for Team Blue. 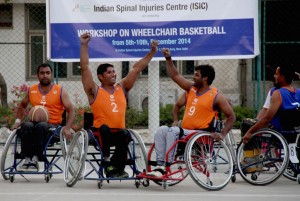 ‘Man of the match’ Neeraj (jersey no.2) jubilant after scoring a basket. ©ICRC/Ashish Bhatia

Neeraj, the ‘man of the match’, who scored five of the six winning baskets for Team Orange, said the game has restored his confidence and given him a sense of purpose. It is also his profession as Neeraj is a coach at the ISIC. High on the win, he attributed his superb performance to good teamwork. “The team is always greater than the individual. I could never have done so well if the team did not play in a coordinated and united manner,” said Neeraj. Ahead of the game, the players had received a week of intensive training. They spent the last two days with international coaches Jess Markt of the US, Mark Walker from Australia, Mike Rosenkrantzshah from Nepal, Manoj Soma from the UK and Aram Voerman from the Netherlands. The coaches were impressed by the players during the training sessions and feel they have the potential to play at the international level. “The level of players here is similar to that of the Afghanistan National Wheelchair Basketball team when I started training them in 2009. They are very enthused about the game and can definitely be trained to participate in international matches,” said Markt, who, together with the ICRC, has made the Afghanistan Wheelchair Basketball Project a success, creating a team that now plays internationally. The aim is similar in India — to train and mentor players so they can form the first national wheelchair basketball team that will participate in international tournaments. “Our target is Rio 2016 and then Tokyo 2020 (the Olympics),” said P Madhavi Latha of the Wheelchair Basketball Federation of India (WBFI), at the conference. The WBFI was formed around a year ago with the vision of creating an inclusive, tolerant society for those with disabilities. 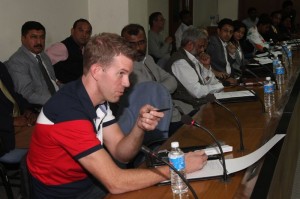 Coach Jess Markt interacts with the audience during the roundtable discussion. ©ICRC/Ashish Bhatia

In order to reach this goal, the players require infrastructure, both in terms of courts and equipment, but, more importantly, they require training. “Infrastructure does not refer only to stadia and equipment,” said Rajesh Tomar, the President of the Paralympic Committee of India. “We need more world-class coaches like Jess, Mark, Mike, Manoj and Aram to come forward and be willing to train these players,” he added, emphasising on the lack of enough classifiers in India. Classifiers are certified technicians who assess athletes by reference to the impact of impairment on their ability to compete in a specific sport. This is where NGOs, corporates and national and international sports bodies could step in. Coach Mike suggested that the US-based National Basketball Association (NBA), which is present in India, be roped in to help with accessibility to courts and coaches. Ms Latha urged representatives of corporate groups present at the roundtable to take up disability sports as part of their CSR initiative. “Most companies direct their CSR activities towards education. Sports is part of education. It’s not a luxury; it can equip those playing it with a livelihood. I urge corporates to make disability sports part of their CSR agenda,” she said, adding that it is now mandatory in India for companies to invest at least 2 per cent of their net profit on CSR. Apart from aiding physical rehabilitation, sports help in ensuring social inclusion for the disabled. As Coach Mike said, “Disability sports is a development issue. It is about giving the disabled an opportunity to participate in mainstream and Paralympic sports.” About the event: The roundtable conference was organized as part of a month-long initiative by the WBFI, the ICRC, Choice International, UK, the Yes We Too Can Charitable Trust and other local and international partners to hold countrywide training workshops and conferences. The aim of these workshops, being held in Delhi, Cochin, Bangalore, Pune and Chennai, is to improve the self-confidence, motivation, and social inclusion of disabled people in India.   More resources: Announcement: ICRC partners with WBFI for December workshops on wheelchair basketball across India The ICRC and physical rehabilitation Afghanistan: Wheelchair basketball players achieve the impossible dream Jess Markt’s blog ICRC New Delhi