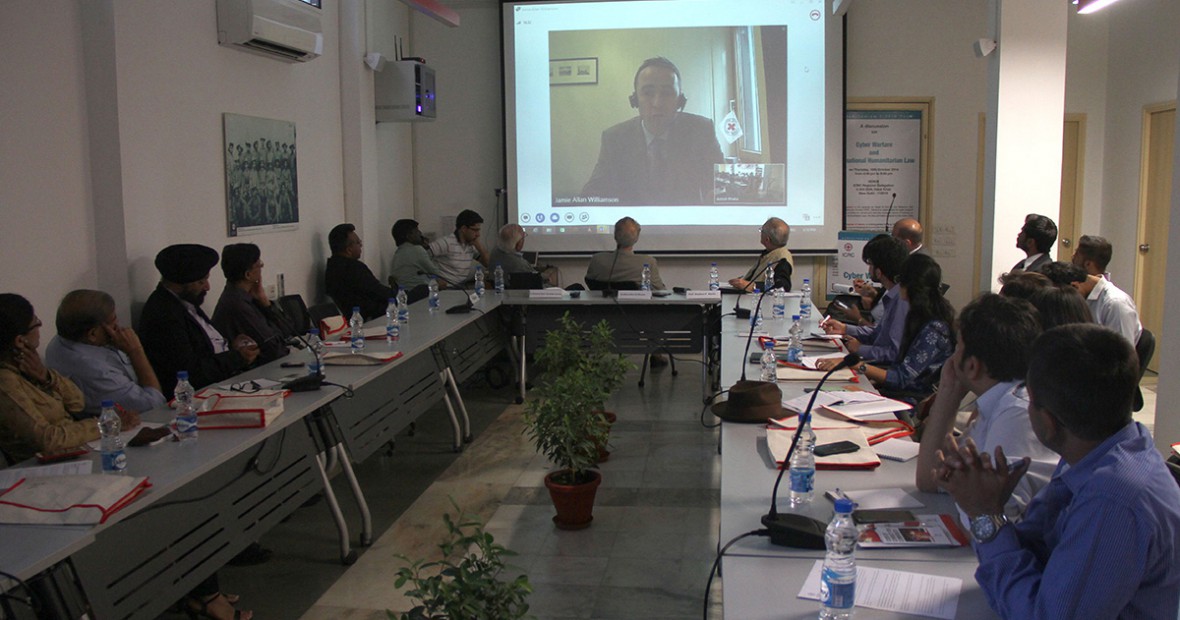 Jamie Williamson, the head of the FAS Unit at the ICRC, joined Tiffin Talk II on Skype from Geneva. ©ICRC/Ashish Bhatia

ICRC engages with academics, students, army officers, legal and defence experts to discuss interplay of IHL and IHRL in armed conflict situations and the challenges cyber warfare is posing to IHL applicability

How does one decide whether international humanitarian law (IHL) or international human rights law (IHRL) applies when riots overlap with armed conflict situations? How do military and security forces figure out who’s a civilian and who’s a party to the conflict at checkpoints in the absence of uniform and insignia? What is the quantum and magnitude of collateral damage in counter-terrorism operations? How can the legal system be used to anticipate and qualify developments in cyber warfare? When is the use of force against a country engaged in cyber attacks justified?

On Thursday, 16 October, legal and defence experts, military officers, students, researchers, journalists and ICRC experts discussed, debated and sought answers to the above questions and more over the course of two engaging and stimulating discourses. On Thursday morning, a panel discussion was jointly organized by the ICRC and the Institute for Defence Studies and Analyses (IDSA) on the ‘Use of force in armed conflicts — Interplay between the conduct of hostilities and law enforcement paradigms’ on the campus of the IDSA in New Delhi. The event was attended by students, researchers, professors and army officers among others. 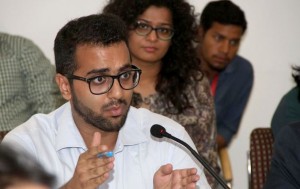 On Thursday evening, ICRC New Delhi held the second edition of its well-received Humanitarian Tiffin Talk series at its Delegation in Safdarjung Development Area. Students and professors from Jindal Global Law School, professors from Amity School of Communication, Indian as well as foreign students from other institutes and Red Cross Movement Partners interacted with experts on cyber warfare to make Tiffin Talk II a resounding success.

Both the talks featured well-known experts in the fields of defence, cyber warfare, IHL and IHRL, who, apart from giving novel, insightful and incisive views on the topics of discussion, set the ball rolling for stimulating debates and held their own while fielding complex questions and comments from the audiences.

The panel discussion, which was flagged off with a welcome address by Brigadier Rumel Dahiya, SM (Retd), deputy director general, IDSA, and opening remarks by Benjamin Wahren, deputy head of the ICRC regional delegation in New Delhi, featured three case studies. In the chair was the formidable Lt Gen Satish Nambiar, PVSM, AVSM, VrC (Retd), of the Indian Army. The veteran army officer surpassed his role as a moderator — he not only succinctly encapsulated the views of the panelists but added value to the discussion by citing instances from his own experiences in the context of the topic. 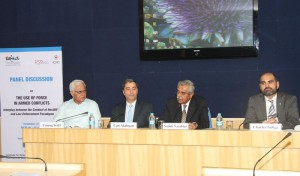 Charles Sabga, regional legal adviser, ICRC New Delhi, presented on the use of force and the interplay of IHL and IHRL at checkpoints. “Notwithstanding the application of laws of war or their lack thereof, another body of law — IHRL — may apply to the actions of State and Non-State Actors at checkpoints in armed conflict,” said Mr Sabga, adding that civilians must be spared from attacks at all times.

Can Akdogan, regional FAS delegate, ICRC New Delhi, spoke about the applicability of IHL and IHRL in cases where riots occur in armed conflicts, illustrating his talk with his experiences in the Turkish Army during the insurgency in Turkey. This was followed by an interesting presentation on ‘Collateral damage and counter-terrorist operations’ by Major General Umong Sethi, AVSM, VSM (Retd), Indian Army.

Mr Sabga also filled in for Jamie Williamson, the head of the FAS Unit at the ICRC, who was to join the discussion on Skype from Geneva, but could not do so due to a technical snag. Mr Sabga gave an interesting impromptu talk on the use of force against legitimate targets with a specific focus on the ‘sleeping fighter’, which elicited insightful comments and questions from members of the audience.

The second edition of ICRC’s Humanitarian Tiffin Talk on Thursday evening featured three speakers — Jamie Williamson, who joined the discussion on Skype from Geneva, this time without any technical snag; Professor Stephen P Marks, visiting professor at Jindal Global Law School; and Lt General (Retd) Davinder Kumar, who retired as the signal officer-in-chief after 41 years of service in the Indian Army. In the chair was Gudmundur Eiriksson, former ambassador of Iceland to India, Bangladesh, Malaysia, Nepal, Singapore and South Africa. The speakers presented on the topic of the talk, ‘Cyber warfare and IHL’, followed by a question-and-answer session and high tea at the delegation. 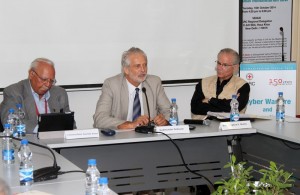 Lt General Kumar gave what he called a “soldier’s view” on the topic. “Cyber warfare is an asymmetric way of waging war, because most often one doesn’t know who is carrying out the attack and from where,” he said, while informing the audience that 140 countries across the world are developing cyber offensive capabilities. “If we are able to successfully tackle the attribution problem, the applicability of IHL in cyber warfare would change forever.” He stressed on “human security” vis-à-vis national security.

Professor Marks focused on three talking points: how IHL evolves and responds to challenges; how the international legal system can be used to anticipate and check developments in cyber warfare; and what’s next. He also delved into questions of how ‘harm’ can be addressed in this context and the impact of cyberwars on the civilian population in terms of human rights to food, healthcare, water etc. “A proposal has been made to put in place a new treaty to deal with cyber warfare. Another proposal has been made for a multilateral framework or cyber security organization to deal with cyberwars,” he said, rounding up his talk.

Jamie Williamson, while iterating that we are still in the process of getting a full perspective on cyber issues, also raised the issue of attribution and proxy war. He sought to answer questions like what kind of cyber attacks constitute the use of force under the UN Charter; how can we control attacks on civilian infrastructure and the implications of cyber attacks on international criminal law.

The audience asked questions ranging from the role of media in spreading awareness about the topic, privacy versus security in the cyberspace, relevance of soldiers in cyber warfare, invoking human rights and perception management and recruitment of members by non-state actors through social media.

We will soon upload the audiovisual recordings of both the discussions on this blog.

For more on contemporary challenges for IHL, visit this page: New technologies and IHL