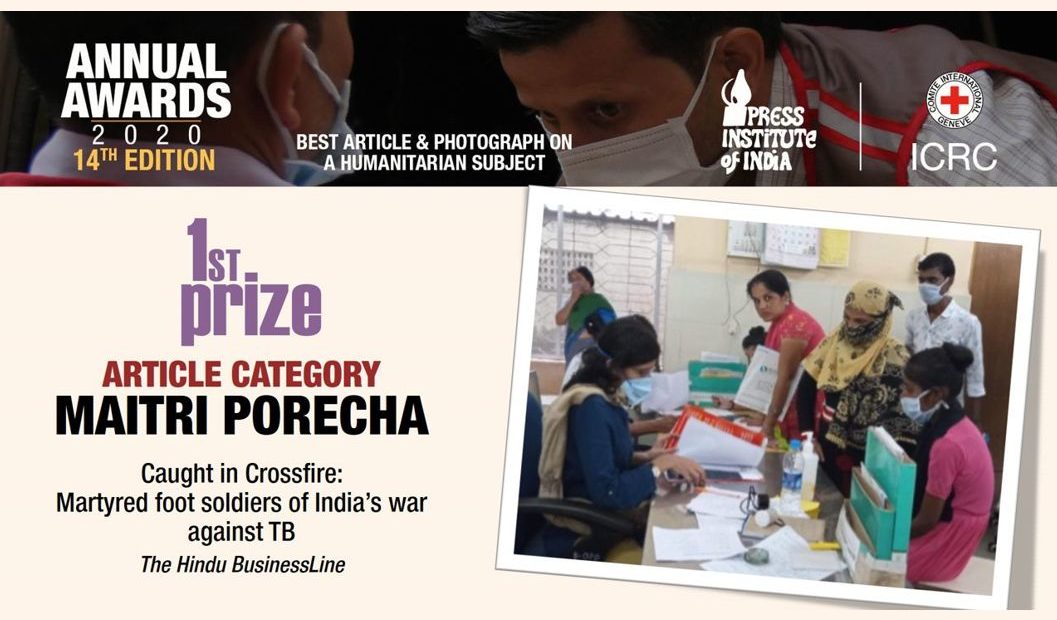 The Press Institute of India (PII), Chennai, and the International Committee of the Red Cross (ICRC), New Delhi, announced the winners of this year’s PII-ICRC Annual Awards for Best Article and Best Photograph at a virtual programme held on 4 December 2020. The theme of the 14th edition of the awards was Superheroes: Battling at the Frontline in the Time of Crisis.

The first prize in the Best Article category was awarded to Maitri Porecha for her article, ‘Caught in crossfire: Martyred foot soldiers of India’s War against TB’, which appeared in The Hindu BusinessLine. The report underscored the high rate of infection and death among foot soldiers — sweepers, ward attendants, cooks, security personnel, among others — working at one of Asia’s largest TB facilities.

The second prize was shared by Jigyasa Mishra for her article, ‘Footprints of protest in the sands of mine’ that was published on the People’s Archive of Rural India (PARI) website, and Varsha Torgalkar for her piece, ‘Sanitation workers on the frontlines of the Pandemic are overlooked, unprotected’, for The Swaddle.

The third prize went to Menaka Rao for her article, ‘We will die doing our duty: How ASHAs are battling coronavirus without safety gear or training’ that appeared on the Newslaundry website.

At a time when the world is challenged with one of the most defining crises in modern times, the reportage, from the entries received, underlined not only the brave fight put up by frontline workers, but also the resilience of communities facing the compounded humanitarian impact of weak health infrastructure, prevalence of other lethal illnesses, and natural disasters and climate risks.

Sanket Jain and Faysal Bakili were specially mentioned for their articles for Firstpost and Chitralekha (a Gujarati weekly), respectively. Jain’s piece brought to the fore the everyday heroes who saved thousands of lives during floods in Kolhapur, Maharashtra, while Bakili’s article focused on the humanitarian service of a man who helps dispose of unclaimed bodies of those dying from COVID-19.

In the Best Photograph category, Manvender Vashist of the Press Trust of India and Ashwin Prasath of The New Indian Express won the first and second prizes for their pictures that captured crematorium staff, fully covered in personal protective gear, carrying out the last rites of COVID-19 victims. Rinku Raj of Malayala Manorama won the third prize for his photograph of nurses providing care to the sick and elderly, and spreading much-needed hope among patients.

Special mention prizes were awarded to photojournalists Arul Horizon of The Indian Express and P. Jayesh of Mathrubhumi, showcasing the courage and compassion of healthcare workers and first responders. 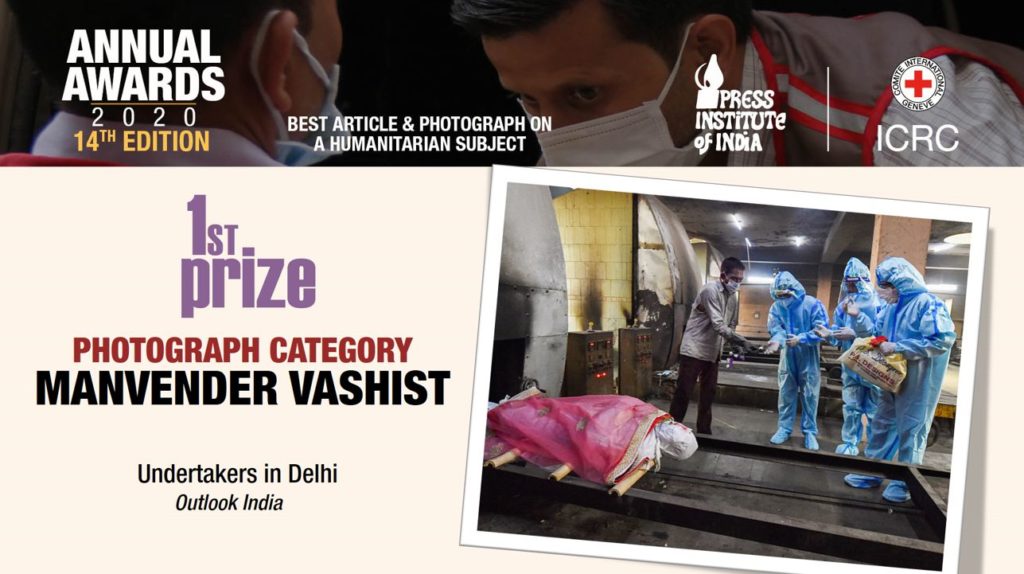 For the first time in the Best Photograph category, appreciation awards were given to Narendra Vaskar, The Indian Express; Pattabi Raman, The New Indian Express; Prashant Kharote, Lokmat Times; and S.L. Shanth Kumar, The Times of India; for their extraordinary photographs taken during such unprecedented times.

Speaking on the occasion, chief guest, Yahia Alibi, Head of Regional Delegation, ICRC New Delhi, said, “This year, the awards hold special significance as we salute and pay our deepest regards to the hundreds of thousands of healthcare personnel, Red Cross volunteers, and first responders who continue to make extraordinary sacrifices in these unprecedented times as they step out of their homes every day to save people’s lives and bring critical relief to those affected by the COVID-19 crisis.”

“Despite all odds, journalists are doing a great job in bringing stories to the fore and, often, they are holding the administration responsible for many of the shortfalls they see. There are also feel-good stories being reported. But underlying all that is the passion to pursue good journalism, which indeed is heartening,” said Sashi Nair, Director, Press Institute of India, Chennai.

The award ceremony was preceded by an interesting and thought-provoking discussion that dwelt on the theme for this year’s awards: Superheroes: Battling at the Frontline in the Time of Crisis. The panel comprised jury members Ranjita Biswas, Dr Jaya Shreedhar, D. Krishnan and Manjira Majumdar.

The awards, instituted by the PII and the ICRC, are designed to promote and recognise the outstanding work of journalists in the field of humanitarian reporting.