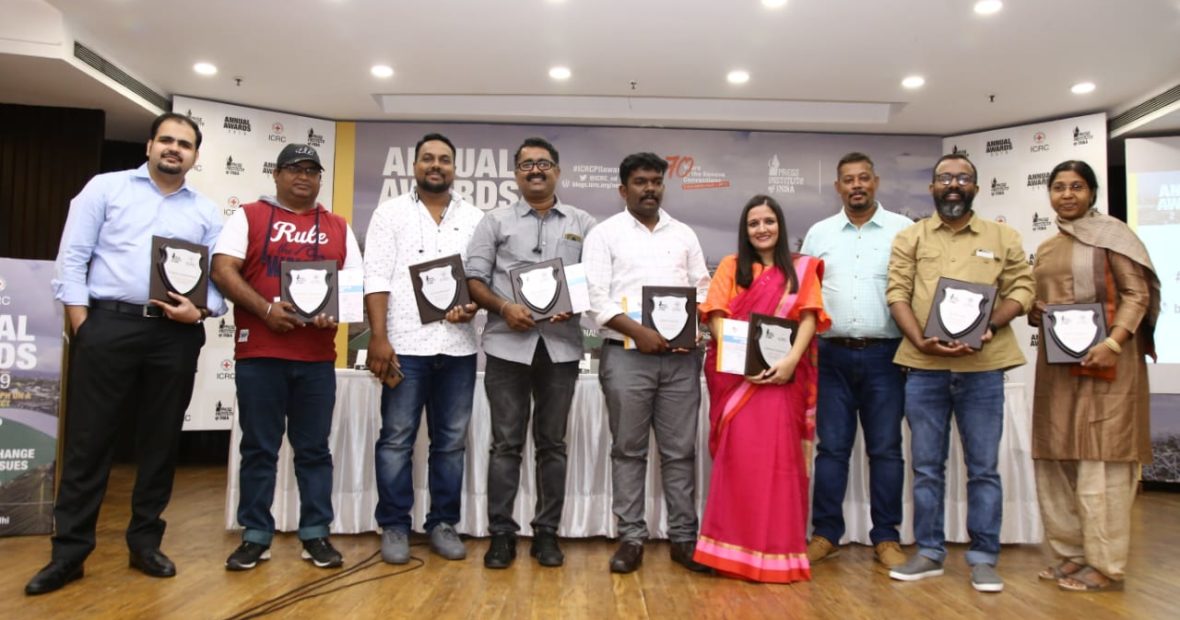 Winners of the 13th edition of the PII-ICRC Annual Awards for Best Article and Best Photograph on a humanitarian subject, jointly organised by the Press Institute of India (PII) and the International Committee of the Red Cross (ICRC) New Delhi Regional Delegation, were announced here today. The theme of the annual awards this year was ‘Impact of Climate Change on Humanitarian Issues’.

Urvashi Sarkar, an independent journalist, won the first prize in the Best Article category for her piece, ‘Our houses are vanishing. Nobody cares’, which appeared on the PARI (People’s Archive of Rural India) website. The story tracks climate-related displacement and looks at the migration of people between Sagar and Ghoramara Islands in West Bengal and the vanishing of islands, homes and livelihoods.

Disha Shetty, independent journalist, writing for IndiaSpend, bagged the second prize for her article, ‘Bengali-speaking students in Kannada-medium Bengaluru school reveal journey of climate change refugees from disappearing islands’. It was the third article in a series on how climate change is disrupting people’s lives and how people are adapting.

The third prize-winner in the same category, Anup Sharma, an independent journalist based in Guwahati, was awarded for his article, ‘Living like Nomads’ in The Pioneer – a story that looked at how climate change-induced erosion affected peoples’ livelihood and highlighted a tale of livelihood crisis and migration.

In the Best Photograph category, the first prize was shared by G. Sivaprasad, news photographer, The Mathrubhumi, for his picture, ‘Close to the heart’, and Rijo Joseph, chief photographer, Malayala Manorama, for his picture, ‘Running for life’. The two winning entries show a man running on the Cheruthoni Bridge holding a child close to his chest, at the time of the devastating Kerala floods of August 2018. A few metres from the Cheruthoni dam, the bridge was swept under water minutes after they crossed over.

The second prize was won by Rinku Raj, senior photographer, Malayala Manorama, for his photo, ‘Rough sea, tough life’. The picture shows the desperation on the face of a sick woman in a coastal area in Thiruvanthapuram, Kerala, who has lost her house to massive waves invading the shore.

The third prize went to Bibin Xavier, photojournalist, Deepika Daily, for his picture, ‘It was life’. The picture shows a person from the Fire and Rescue Services with a child who was trapped in soil following a landslide in Idukki District – the child died before reaching the hospital.

Special awards were presented in the Best Article category to Jency Samuel, independent journalist from Chennai for her article, ‘Unpredictable seas push fishers away from home’, and to Nikhil Ghanekar, independent journalist based in Delhi, for his piece, ‘When the hills go thristy’. In the Best Photograph category Prashant K., senior photographer, Lokmat, Pune, won the special mention for his picture, ‘Mining the aquifer’. 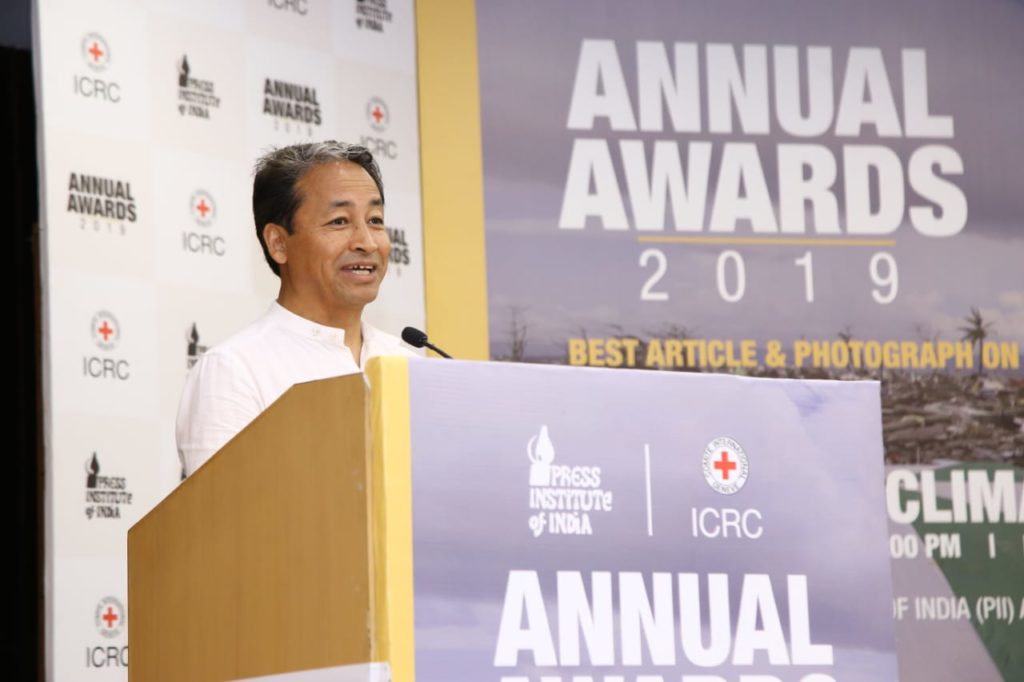 Sonam Wangchuk, chief guest and Ramon Magsaysay Award winner who is the founder of Himalayan Institute of Alternatives Ladakh, and co-founder SECMOL, shares insights on climate change on the occasion. ©ICRC

Speaking on the occasion, chief guest, Ramon Magsaysay Award winner Sonam Wangchuk, founder, Himalayan Institute of Alternatives Ladakh, and co-founder SECMOL, said: “We hear about wars among countries, but the impact of the war on nature is much worse. Today, a lot more people are dying in calamities that occur due to the changing environment.” He added, “Some of the solutions, including the ice stupa, are small efforts that are helping us survive. These can work for a few more years but the real solutions lie in the big cities.” Quoting Mahatma Gandhi, he said: “live simply so that others may simply live”.

Underscoring the humanitarian consequences of climate change, Yves Heller, deputy head of the ICRC Regional Delegation said, “Climate Change worsens vulnerabilities, poverty and inequalities, especially in situations of armed conflict, where countries, communities and populations are the least able to protect themselves and adapt to an ever-changing environment.”

Sashi Nair, director-editor, Press Institute of India, Chennai, stressed the need for editors and journalists to play a catalyst’s role in highlighting issues on a regular basis, and get action taken on avoiding a climate emergency and securing a safe future for the generations to come.

This year saw many interesting entries from national and regional publications covering the wide-ranging impact of environmental degradation and destruction of ecosystems. 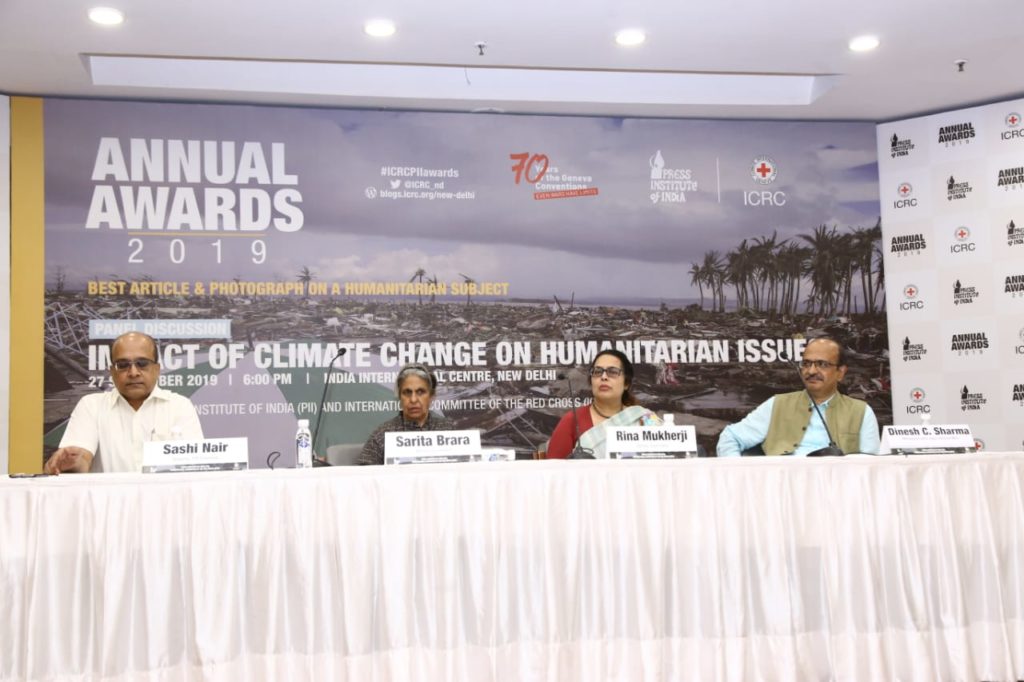 The awards, instituted by the PII and the ICRC, are designed to promote and recognise the outstanding work of journalists in the field of humanitarian reporting.