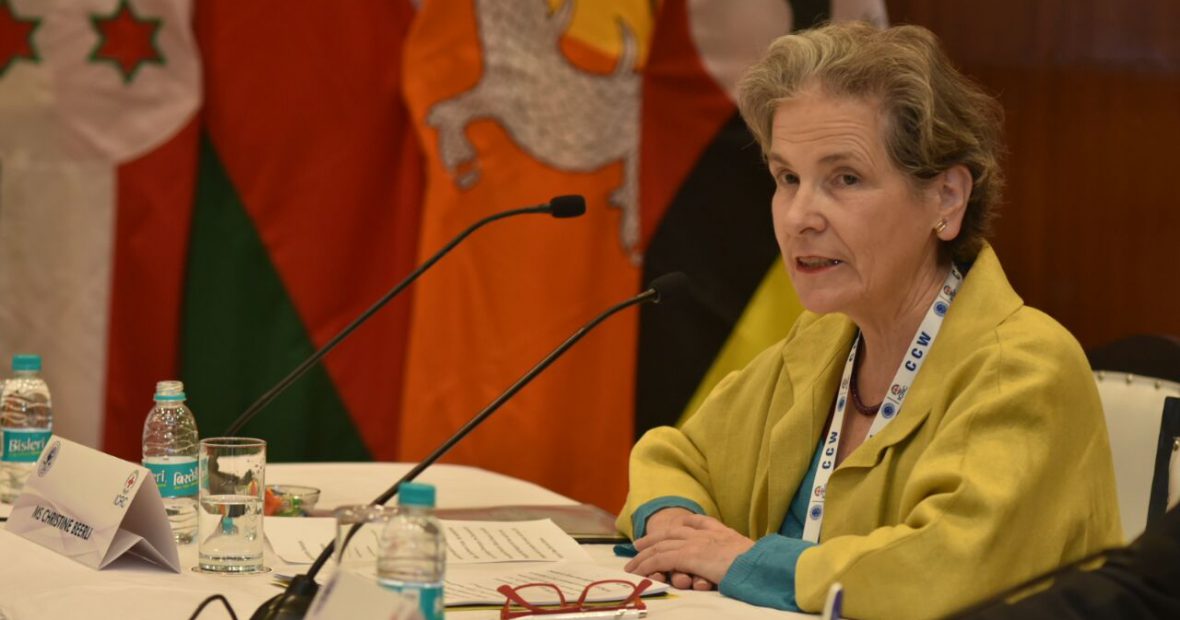 The ICRC is very honoured to be co-hosting this International Conference on the Convention on Certain Conventional Weapons with the Indian Society of International Law, under the guidance and with the support of the Ministry of External Affairs, Government of India.  My heartfelt thanks go to Secretary Ghanshyam, the Disarmament and International Security Affairs Division of the MEA, President Natchiappan and their staff for their tireless work to prepare this event, with the ICRC teams in New Delhi and Geneva.

Let me also commend India for its leadership role in the work of the Convention on Certain Conventional Weapons (the “CCW”), most recently demonstrated by its successful chairing of the CCW’s Group of Governmental Experts on “Lethal Autonomous Weapon Systems”.  India is also leading by example, having adhered to all five protocols of the CCW and reporting annually on its national implementation measures.

The CCW is a cornerstone of international humanitarian law.  It derived from the 1977 Additional Protocols to the Geneva Conventions, which reaffirmed and developed IHL in response to new trends in how warfare was being conducted, particularly in the wars of liberation against colonial domination.  These trends included aerial bombardments and the use of means and methods of combat that exposed civilians to a heightened risk of incidental death and injury.  In response, Additional Protocol I codified fundamental rules on the conduct of hostilities applying to all means and methods of warfare, recognizing that the imperative of humanity imposes limits on their choice and use.  These include rules to protect civilians against indiscriminate attacks and combatants against inhumane means and methods of warfare.

Based on these two fundamental rules, which are customary rules of IHL and therefore of universal application, the CCW establishes a framework to limit or prohibit the use of specific weapons.  In so doing, the Convention recognizes that it is not just the misuse of weapons in warfare that generates suffering in armed conflicts, but that certain weapons, by their very design, may inflict unacceptable harm in some or all circumstances, and therefore require specific limitations or prohibitions.  This is certainly the case for landmines and incendiary weapons, which were among the first to be specifically regulated by the CCW when it was adopted by a United Nations Conference in 1980.

Designed as a dynamic instrument capable of responding to advancements in weapon technologies and developments in the nature and conduct of warfare, the CCW was strengthened with the addition of new protocols further restricting the use of landmines and regulating explosive remnants of war, weapons that have killed and maimed hundreds of thousands of civilians over the last decades, most often well after conflicts have ended.  The CCW was also able to rapidly respond to the development of a new and cruel type of weapon — blinding lasers — by prohibiting them even before they could be used in battle.

The ICRC was closely involved in the processes that led to the CCW and its Protocols, consonant with its long-standing role to promote the strengthening of IHL rules when this is needed to better protect the victims of armed conflict.  As a neutral, independent and impartial humanitarian organization, the ICRC’s concern with certain weapons is of course strictly humanitarian.  We do not question the legitimacy of conventional weapons as tools of war, but when certain weapons cause unacceptable harm, military needs must yield to humanitarian imperatives.  In the course of its 150-year history, the ICRC has periodically drawn the attention of States to the high human costs of certain means and methods of warfare, which we have observed first-hand in our humanitarian operations on the frontlines of armed conflicts.  In the context of the CCW, we appealed for new rules on, for example, landmines and explosive remnants of war, as existing rules were insufficient to prevent and address their extensive impacts on civilians.

It is no secret that the ICRC actively supported the prohibition of anti-personnel mines and cluster munitions, as we believe their complete ban is the best way to prevent and remediate their devastating and long-lasting impacts on civilians.  Anti-personnel landmines were comprehensively prohibited by the Ottawa treaty (which celebrated its 20th anniversary just 2 days ago), as were cluster munitions in the Oslo convention.  We continue to urge States to join these important IHL treaties, and in the meantime to abide by their norms as a matter of policy and as a humanitarian imperative.

The CCW remains a crucial, foundational IHL treaty, which all States must be in a position to join.  Today, two-thirds of States are High Contracting Parties to the CCW, including major military powers.  This is commendable, but it is not enough.  The ICRC continues to work for universal adherence to the CCW and all of its five Protocols, and we call on all States that have not yet done so to ratify or accede to these instruments at the earliest opportunity.  We congratulate Afghanistan for having joined the Convention and its five Protocols earlier this year.  To those of you representing States that are not yet party to the CCW, it is my hope that by the end of this conference, you will be convinced to advise your governments to join the Convention and its five Protocols.

The CCW provides a framework for action to address concerns arising from ongoing armed conflicts and from changes in the nature and evolution of warfare.  These include issues that have long been on the CCW’s agenda, such as how best to address the indiscriminate impacts of improvised explosive devices (IEDs) and the dangers to civilians and to humanitarian operations posed by anti-vehicle mines.  Both of these issues will be discussed at this conference.

The increasing urbanization of warfare is forcing a reassessment by parties to armed conflicts of their choice of weapons in populated areas, in particular the use of heavy explosive weapons, such as large bombs and missiles, indirect fire weapon systems, as well as large IEDs.  These weapons may not raise any concerns when used in open battlefields, but when used against military objectives located in concentrations of civilians, they are a major cause of civilian death, injury, destruction and suffering.  Which is why the ICRC considers that the use of explosive weapons with wide-area impacts should be avoided in densely populated areas due to the significant likelihood of indiscriminate effects.  With urban warfare becoming the “new normal”, and some 50 million people today suffering the impacts of wars in cities, the ICRC welcomes that CCW High Contracting Parties have been paying increasing attention to this pressing humanitarian issue.

New developments in the fields of robotics and artificial intelligence are advancing at high speed.  This lends urgency to the CCW’s work on the emergence of autonomous weapon systems – weapons that can independently select and attack targets without human intervention.  Discussions were formalized this year in the Group of Governmental Experts (GGE), which Ambassador Amandeep Singh Gill of India will continue to chair next year.  There is general agreement among High Contracting Parties that human control must be maintained over weapon systems and the use of force.  The ICRC has been calling on States to begin to set limits on autonomy in weapon systems to ensure IHL compliance and to satisfy ethical concerns.  Next year, the GGE will discuss the characteristics of autonomous weapons, the scope of human-machine interaction and policy options.  All States have an interest in engaging in these deliberations, which have profound implications for the future of warfare.  This should further motivate States not yet party to the Convention to join without delay.

By providing appropriate responses to these and other emerging challenges, the CCW will show that it continues to be fit for purpose.  However, like other IHL treaties, the CCW’s continuing relevance does not depend only on the adoption of new legal or policy responses to emerging issues, but first and foremost on respect for existing law.  It is therefore essential that CCW High Contracting Parties faithfully implement their obligations under the Convention’s Protocols, notably through instructing their armed forces in the Protocols’ requirements, to ensure that they will be fully respected in the event of armed conflict.

And this brings me to my concluding remark about the fundamental importance of respecting IHL.  When belligerents do not respect the basic rules of IHL, when wars are fought without limits, as we are witnessing today in many armed conflicts in parts of the Middle East, Africa and Asia, with endless escalations of violence and brutality, when protracted conflicts spill over across borders, the end result is tremendous human suffering.  Non-compliance with IHL comes at a very high cost, foremost to civilian populations, but also to regional and international peace and security.

We are now beginning what promises to be two fascinating days of discussions on the CCW, its implementation, and emerging issues of relevance to the Convention.  I especially look forward to hearing your national perspectives, in terms of how the conventional weapons under discussion are impacting your countries, how you are operationalizing the CCW’s requirements, and your successes and challenges in doing so.  The sharing of practical experiences among States is an effective means to facilitate the Convention’s implementation, and the ICRC is keen to support you in these efforts.

I thank you for your attention and wish you a successful conference.