After conducting a packed 10 days of wheelchair basketball clinics in the southern Indian city of Chennai – as I fly from India to Afghanistan – I finally have a few moments to take a breath and write out my impressions of the experience.

I taught introductory theory courses for Classifiers, Coaches, and Referees as well as camps for both beginning and more experienced players – an awful lot of material to squeeze into a week and a half, but well worth every minute.

This was the first time technical classes – for Classifiers, Coaches and Referees – for any adaptive sport were conducted in India. The workshops were organized by the Wheelchair Basketball Federation of India (WBFI) and the International Committee of the Red Cross (ICRC), which have partnered in a grassroots campaign to build awareness and participation in wheelchair basketball in India from the ground up. 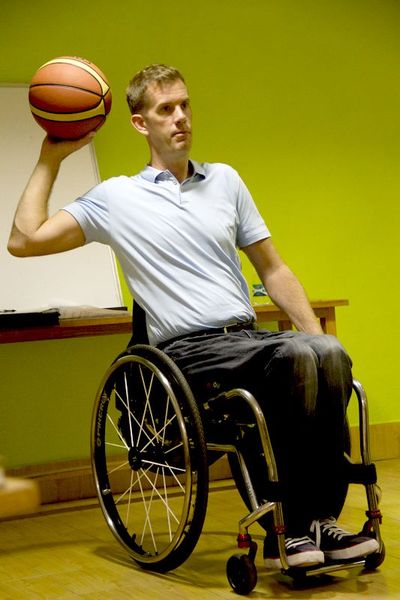 The courses brought together 75 people from 10 Indian states. In addition to that, there were dozens of volunteers, several local leaders in business and the non-profit world, para-athletes from other sports, and a variety of other observers who had the chance to see wheelchair basketball being played in India for the first time. It was beautiful to see how much the sport has already grown there since I first visited just eight months ago. Course participants came from as far away as Nepal and Kashmir, and all of them worked together in mixed groups that didn’t hew to the locations they came from.

It was exciting to see so many different areas and cultures represented and even more exciting to see players and technical officials interacting as though they had all grown up in the same neighborhood – this despite the fact that many of them don’t even share a common language. I’ve gotten used to teaching through interpreters, but this was the first time I’ve ever had to teach through multiple interpreters (as many as three) all at the same time!

The diverse group of course participants included several women, including a coaching trainee – Nasreena – from the far northern area of Jammu and Kashmir. Nasreena had never played or coached basketball of any kind and, like her fellow Kashmiri players, was in a culture very different from her own, but she jumped right in and, by the end of the clinics, was shouting instructions to more experienced male players from different states as though she’d been doing it for years.

The participants from Nepal were also welcomed with open arms and developed fast friendships with the Indian players. I was so impressed that they would make the two-day plane, train, and bus journey to be a part of this event. It was a truly remarkable mix of people, and showed the unique power of sport to be a unifying force that blurs all kinds of cultural boundaries.

As I’ve seen in the countries where I’ve coached previously, wheelchair basketball can also serve as a tremendous driver for disabled individuals to discover their inner potential and transcend the boundaries their societies have placed on them. This was never more apparent than in the group of brand new players from the southwestern state of Karnataka who said that, before coming to Chennai to attend the workshop, many of them hadn’t left their homes – not their towns, their houses – for years! That was an unbelievable revelation to me, and made me realize all over again how big a difference the opportunity to play sports can make in the lives of people who have spent so long – and become so used to – being marginalized.

More in the series:

Playing with Passion for Pride and Joy…