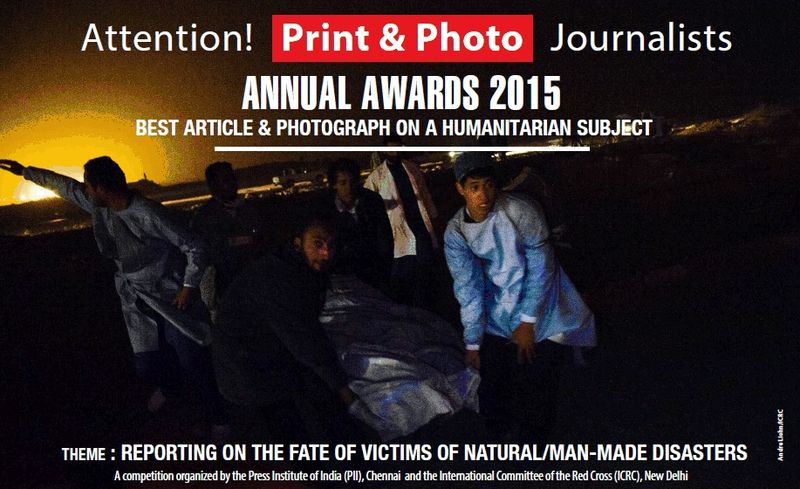 The ICRC and the Press Institute of India (PII) are back with this year’s much-awaited Annual Awards for Best Article and Photograph on a Humanitarian Subject. The theme for the 2015 edition of the awards is ‘Reporting on the Fate of Victims of Natural/Man-Made Disasters’.

If you have written an article or clicked a photograph in keeping with this theme and if it has been published in an Indian national or regional newspaper or magazine between April 2014 and March 2015, send us your entry by 15 September 2015.

This annual competition was started in 2008 by the ICRC and the PII in an effort to recognize the work of Indian journalists in the field of humanitarian reporting, where they throw the spotlight on the human suffering caused by violence and the extraordinary resilience shown by people in such situations.

Last year, the theme of the PII-ICRC awards was ‘Reporting on the Fate of Victims of Armed Violence’ and the Best Photograph category introduced in 2014 was very well received by the media fraternity.

Sohini Chattopadhyay’s piece ‘Buddha’s Orphans’ – published in the Open Magazine in March 2014 – had been adjudged the Best Article and won the first prize in 2014. “I wanted to tell the story of the Rohingyas, as theirs is not an oft-told or heard story. I believed I was on the trail of a good story. The award is vindication of my belief,” said Chattopadhyay. Freelance photojournalist Pattabi Raman, who had bagged the second place in the Best Photograph category last year, said, “This is the only award for both journalists and photographers and a great platform for humanitarian journalism.”