François Bugnion is the ICRC’s Director for International Law and Cooperation within the Movement, reflects* on the organization’s failure to react vigorously to the persecution of Jews by the Third Reich. 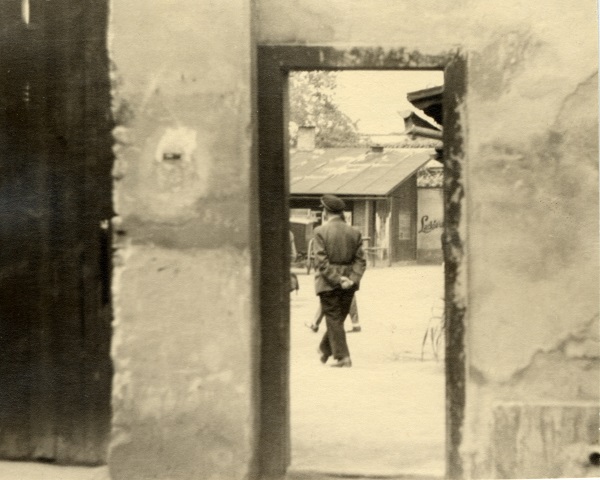 There are times for speaking, and times when one would prefer to remain silent.

Words fail us before these images, which reflect both infinite suffering and depths of horror and cruelty, just as words fail us when we visit the sites where memories of persecution and genocide are preserved: Theresienstadt, Mauthausen, Bergen-Belsen, Ravensbrück, Buchenwald, Auschwitz…

What these images convey, first of all, is the boundless suffering of the persecuted, whose tragic itinerary started with race laws and ghettos and ended in extermination camps, leading from social exclusion to despoilment, hunger, cold, humiliation, deportation, the torment of the camps and, finally, death.

What these images also drive home is the particular cruelty of the persecutors, their absolute contempt for human life and the total perversion of moral values that is evident in their organized killing.

And as a staff member of the International Committee of the Red Cross, one is of course forced to come to terms with the failure of an organization whose mandate is to protect and assist war victims.

Was failure avoidable or not? This is the question that immediately comes to mind in our dialogue with the past.

It is a question that leads to many others: what did the ICRC know of the genocide? What action did it take? What did it attempt? What could and should it have done to try to stop the genocide? How has it faced up to its past?

Unfortunately, documentary evidence is incomplete and leaves room for uncertainty. Some conclusions can nevertheless be drawn from the works of histori ans, in particular the book by Jean-Claude Favez ( The Red Cross and the Holocaust , Cambridge University Press, 1999).

What did the ICRC know? We hardly know how the ICRC obtained its information. Still, there is no doubt that senior ICRC officials had become aware of the genocide by the summer of 1942. When questioned by United States Consul Paul Squire on 7 November 1942, Carl Burckhardt, a distinguished member of the Committee, confirmed the existence of an order issued by Hitler intended to make the Reich ” Judenfrei ” or ” free of Jews ” , in the terminology of Hitler’s Germany. Burckhardt added that since there was no place where they could be resettled, this could only mean one thing.

Faced with this prospect, what did the ICRC do, or attempt to do?

First, it tried to monitor the plight of the persecuted by tracing missing family members and seeking news of deported persons from the German Red Cross.

The ICRC delegation in Berlin also made representations of a general nature concerning the fate of hostages and deportees, and letters were addressed to the president of the German Red Cross. But it is known of course that the German Red Cross was itself under Nazi control and that its main leaders took part in the persecution and genocide.

The ICRC also did its best to send relief items to people in concentration camps and other victims of Nazi persecution. After many difficulties, food parcels were delivered to some camps and ghettos.

A number of ICRC delegates, such as Friedrich Born in Hungary, Georges Dunant in Slovakia, Vladimir de Steiger and Robert Kolb in Romania and René Henry in Bulgaria, were able to exploit the tiny margin of tolerance that still existed in the satellites of the Reich to provide a minimum of protection for victims of persecution and to spar e some of them the ordeal of deportation.

Finally, during the last part of the war, the ICRC took advantage of the dismantling of the Nazi power apparatus to introduce delegates into certain concentration camps and participate – in an admittedly limited way – in rescuing the survivors.

These actions are not negligible, since every life saved is priceless, but they cannot obscure the fact that, overall, the ICRC’s efforts were a failure.

That they amounted to failure is undeniable, since the principles guiding the ICRC’s work had never been so outrageously flouted. Millions of men, women and children died after a terrible ordeal without the ICRC being able to do anything to save them.

Yet the failure was, above all, that of the ICRC’s inability – or unwillingness – to fully recognize the extent of the tragedy that was unfolding, and to confront it by reversing its priorities and taking the risks that the situation demanded.

To what extent is this failure attributable to the ICRC itself? After the war, criticism of the ICRC focused mainly on the issue of public condemnation. Should the ICRC have denounced the genocide? In what way? And by addressing whom?

The ICRC itself raised this question.

In the summer of 1942, alarmed by the drift towards total war, the ICRC had considered launching an appeal on the conduct of hostilities.

The draft was the subject of a written consultation and then examined by the Committee in plenary session on 14 October 1942. In the end, the ICRC decided against launching the appeal.

Why? What emerges from the exchange of correspondence in the written consultation, and also from the minutes of the session of 14 October 1942, is an impression of helplessness. Even the members of the Committee who declared themselves most clearly in favour of an appeal recognized that it would change nothing, that the ICRC would be unable to stop the march to the brink. The fear of compromising activities that the ICRC was actually able to carry out on behalf of prisoners of war certainly played a role, as did less avowable motives such as the fear of causing embarrassment to the Swiss authorities. The intervention of Federal Councillor Philip Etter, who was also a member of the Committee, certainly helped to tip the scales against launching the appeal, in accordance with the wishes of the Federal Council.

The ICRC thus chose the path of confidential representations to the authorities of the Reich and its satellites, but carried them out mainly through its delegations. It was not until the summer and autumn of 1944 that key ICRC leaders became involved in efforts to help victims of Nazi persecution through high-level representations. The criticism of Jean-Claude Favez, who observed that the ICRC ” did not take the supreme risk of throwing the full weight of its moral authority into the scales on behalf of these particular victims ” ( The Red Cross and the Holocaust , p. 282), cannot be refuted.

As Favez further remarked, ” the question may therefore be asked why between, on the one hand, the aid operation, derisory from the point of view of the victims, [… ] and on the other the public appeal, a weapon of last re sort perhaps which the ICRC [… ] felt it could not use, no diplomatic initiative was launched that was both worthy of the drama being enacted before everyone’s eyes and based on a precise calculation of risks, such as a protest letter to Hitler or Himmler, or better still a mission by Huber or Burckhardt to Berlin or Berchtesgaden ” ( Ibid., p. 279).

Even more than the absence of public condemnation, it is, in my opinion, the timidity of the confidential representations that weighs most heavily against the ICRC.

What lessons did the ICRC draw from this failure?

Several can be mentioned:

* Address delivered at the International Red Cross and Red Crescent Museum on 4 November 2002, at a round table organized for an exhibition entitled Mémoire des Camps (original French).