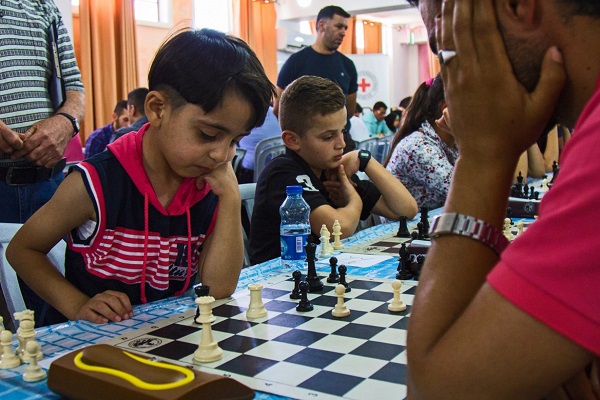 Usaid Taki Al Deen Abed Al Baset from Hebron in the West Bank is 6 years old and has been playing chess for a year. “I love chess because it helps me develop my mind, my time management skills and my patience,” she said on 16 July, after winning one of the nine rounds of a chess tournament held in Al Jib, north-west of Jerusalem. “I’m the champion in the 6-year-old category and I’m participating in an international chess competition in Dubai next week. I’m so happy to be representing the Palestinians in my category!”

A recent chess tournament to encourage self-expression and intellectual stimulation as alternatives to violence brought together 76 players, including many children and teenagers. The tournament was part of a series of youth activities that the ICRC has launched in Jerusalem during 2016.

As well as providing alternatives to violence, our youth activities raise awareness of our work and of three of the fundamental principles that guide it – humanity, neutrality, and impartiality.

The tournament was organized by the Palestinian Chess Federation and the Qattana and Al Jib youth sports clubs. Entitled “Together for Humanity”, it was sponsored by the International Committee of the Red Cross. Other activities for young people have included a performance by the Palestinian Circus School in El-Hakawati theatre, which brought smiles to children’s faces in Jerusalem, where many of them are forced to grow up too fast. 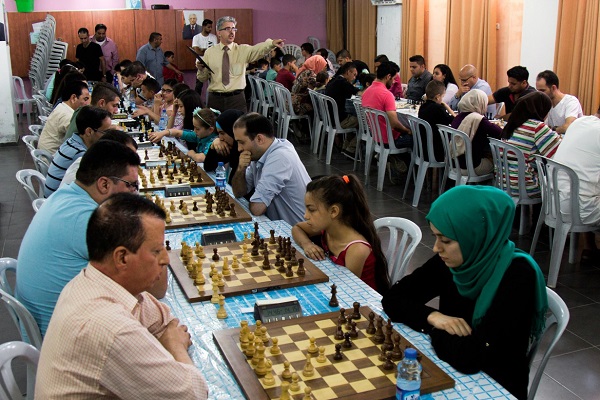 Seventy-six players aged from six to over sixty played nine rounds against each other. Thirteen champions emerged, with three of them under 15. 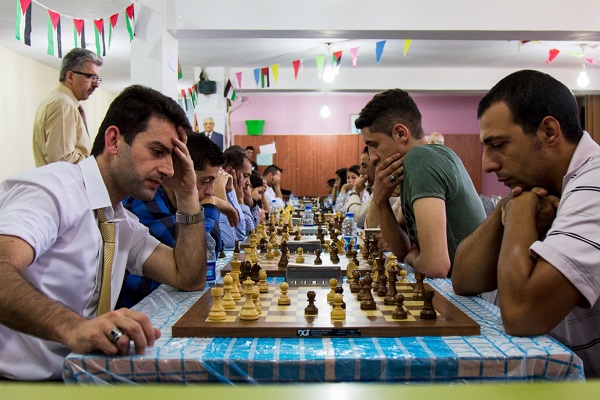 Chess requires strategic skills and a high level of focus and discipline. 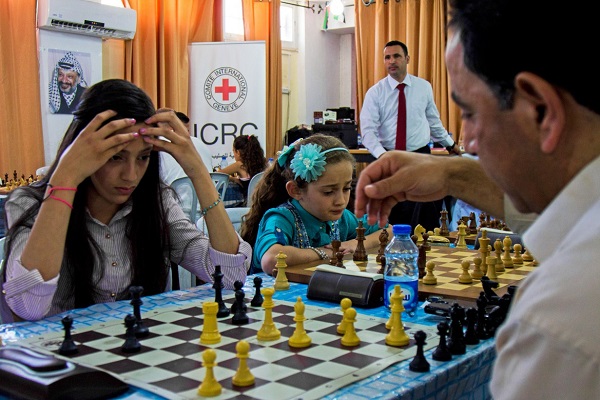 Yara Fakieh (17) comes from Qattana and is a member of the chess team that represents the Palestinians in international tilts. She participated in the world championships in Turkey in 2012 and Norway in 2014. “Norway 2014 was an interesting championship, with participants from all over the world. The players were well-prepared and they had trainers supporting them. One hundred and fifty countries took part, and we managed to move Palestine 10 positions up the world ranking. It was a very good result if you think about the limited resources we have,” said Yara. 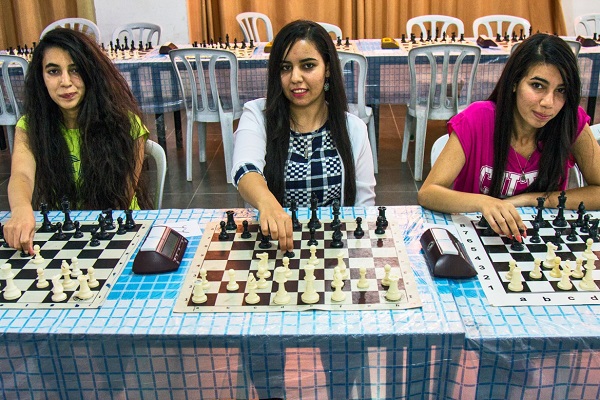 The Jihad Fakieh sisters are all keen chess players. “Chess is a completely different world. You can play whatever role you want if you have the skills. It gives you the chance to be a strong leader, and for Palestinians it also communicates an important message, the intricate reality we live in,” said eldest sister Aseel (centre), who is 19. For 14-year-old Rahaf (right), “chess symbolizes the Palestinians’ reality. It’s a smart game and it helps us develop our skills and abilities. At the same time, we feel the equality in this game because males and females play without discrimination.” 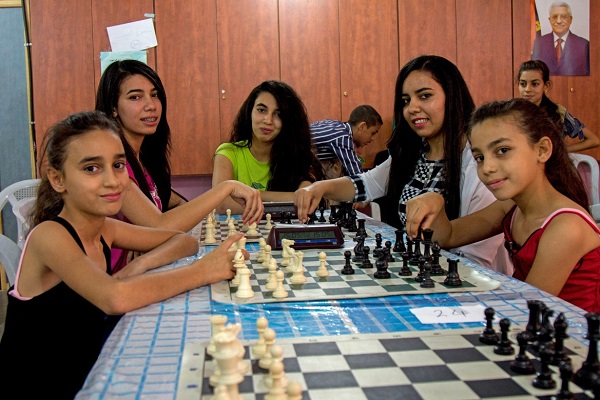 Sadien (left) is 12, and has been playing chess since she was 18 months old. “I love this game because it helps me develop my personal and professional thinking and my personality.” 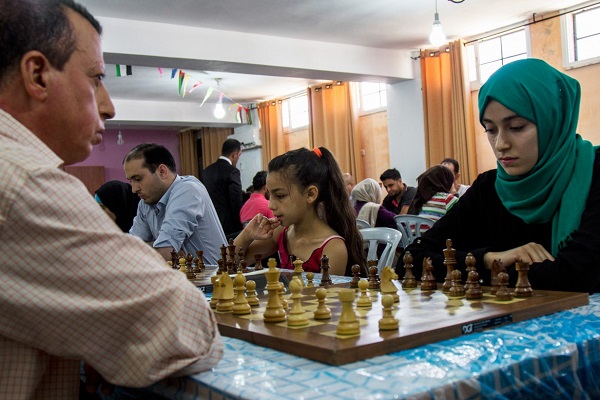 Yara (centre) was crowned Palestine champion of the 10-year-old category last year. “Chess is a king’s game and it requires one to be smart,” she explained. “It helps children behave better and it can influence their lives positively.” 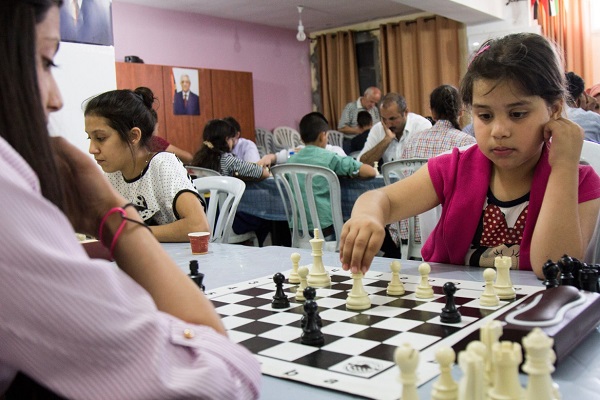 Azhar (7) comes from Al Jib, ten kilometres north-west of Jerusalem, in the seam zone of the West Bank. She started to play chess two months ago. “I play chess because it’s fun. I use the touch-and-move strategy and I don’t like it when I get stuck and can’t figure out the next move. I always play to win by checkmate.” 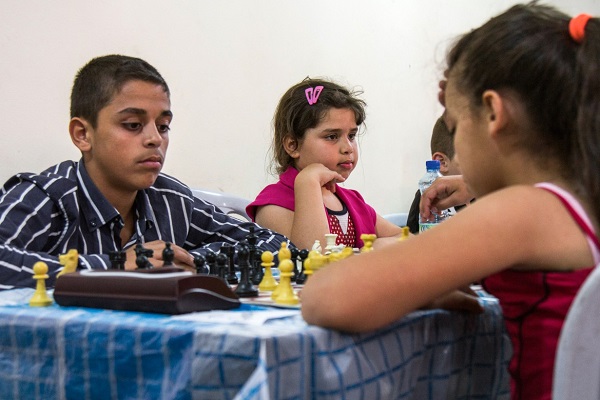 Malek (13) is from Al Jib and has been playing for a year. He intends to practice until he becomes a champion. “This game is fun and it’s about being smart. During the game, I try not to be afraid, but the hardest part is when you lose. When that happens, I always try to learn from my mistakes. There’s no difference between boys and girls in the game, but when I play against a girl, I’m worried because they sometimes cry when they lose. It doesn’t affect my game – I just play to win – but I don’t want people to think that I made them cry.” 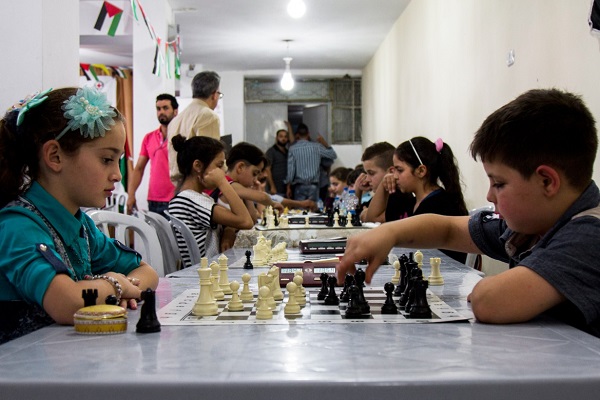 Malak, 9 years old. “I’ve been playing chess for one year,” she says. “I like chess and play it a lot at home. I’ve even taught my dad so he can play with me.” 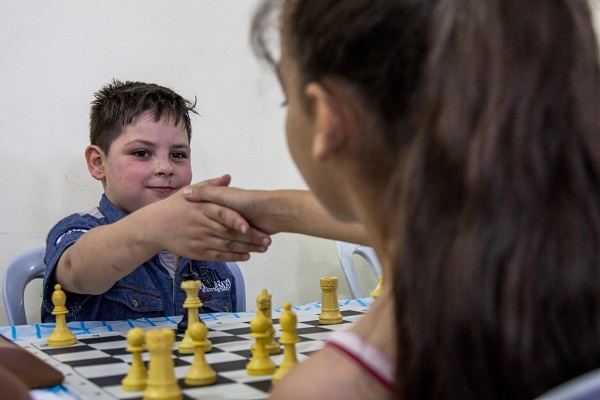 Mohammad (14) is from Beit Surik. He has been playing chess since 2013. “I used to play a lot on my computer, then at school the teacher told us we could sign up for a course and so I’ve been playing ever since. When I play, I think about the person in front of me. I watch their moves, and try to win. My parents support me and the game is fun and intellectually stimulating.” 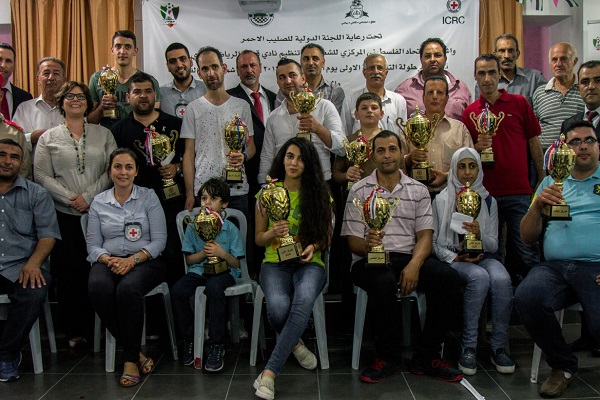 Champions and organizers pose for a group photo at the end of the tournament.