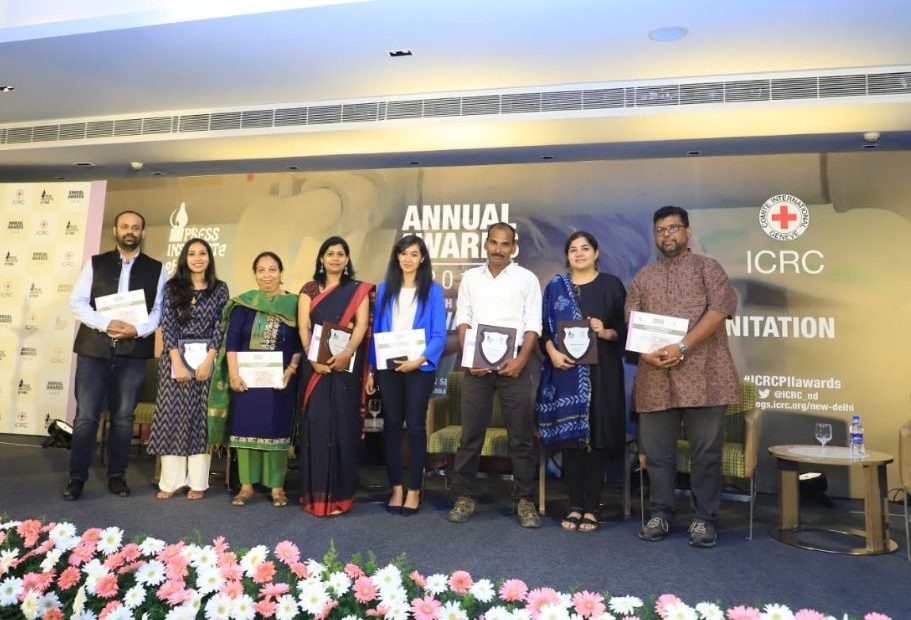 Winners of the 12th edition PII-ICRC Annual Awards for best article and photograph on a humanitarian subject. ©ICRC

Winners of the 12th edition PII-ICRC Annual Awards for best article and photograph on a humanitarian subject, jointly organised by Press Institute of India (PII) and the International Committee of the Red Cross (ICRC) New Delhi Regional Delegation, were announced in Chennai 21 September 2018. This year, the awards focussed on the theme, ‘Changing lives through innovation in health and sanitation’.

Rakhi Ghosh, an independent journalist working in Odisha, won the first prize for her article that appeared on the Village Square website, ‘Kanas villagers make water safe through simple interventions’. The story showed how simple interventions by residents of a coastal village in Odisha had made water from ponds and tubewells safe for consumption.

Sarita Santoshini, based in Assam, writing for IndiaSpend, bagged the second prize for her article, ‘Text messages save lives in state with highest maternal deaths’.The third winner in the same category, Maitri Porecha, was awarded for her insightful article ‘Mobile phones hand-hold mothers through pregnancy’, published in Daily News and Analysis (DNA).

In the best photograph category, Neeraj Gautam, senior photojournalist with Rajasthan Patrika, won the first prize. His picture captured people employing innovative ways of reusing and recycling water in a small village, Manpura, in Rajasthan, which faces water scarcity in the summer months.

Speaking on the occasion, chief guest Dr J Radhakrishnan, Principal Secretary, Health and Family Welfare Department, Government of Tamil Nadu, stressed the role of the media in changing lives through innovation. He said, “The media has the power to create awareness. One photograph or article can change the focus and draw public and policy makers’ attention on what was hitherto neglected. The ICRC PII annual awards encourage journalists to facilitate refocus reshaping of thoughts and bring about developmental change.”

Jeremy England, Head of the ICRC Regional Delegation, said, “For over a decade now the Press Institute of India and the ICRC have been recognising exceptional work by Indian media professionals who use their words and photographs to keep our attention on not just human suffering but the extraordinary resilience of people in the face of emergencies and disasters worldwide. I stand here proud that we continue to recognise the work of those who write about under-reported and overlooked humanitarian issues.”

Sashi Nair, Director-Editor, PII-RIND, said that at a time when journalists were facing immense pressures and challenges, it was heartening to see them work hard and with passion to produce some outstanding work.

The Awards saw many interesting entries from across national and regional publications covering innovation in health and sanitation. The first, second and third place winners received Rs 100,000, Rs 70,000 and Rs 40,000, respectively. Special awardees received Rs 20,000 each. For the first time, entries were invited from journalists working in Nepal, Bhutan and the Maldives.

The awards, instituted by the PII and the ICRC are designed to promote and recognise the outstanding work of journalists in the field of humanitarian reporting.