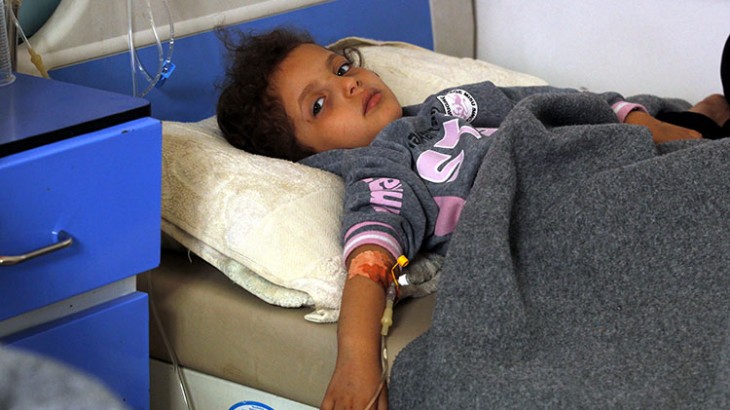 A Yemeni child receives treatment for cholera at a hospital in Sana’a, Yemen. EPA / Yahya Arhab

Statement by Peter Maurer, president of the International Committee of the Red Cross

I am leaving Yemen profoundly concerned for the plight of its people. The cholera outbreak remains alarming. With the rainy season approaching, we expect more than 600,000 cases by the end of the year. This is unprecedented.

This outbreak is manmade. It is a direct consequence of more than two years of warfare. The health care system has collapsed, with people dying from easily-treatable chronic diseases. Key services like garbage disposal have ceased to function, as I saw all too clearly in Taiz.

Unless the warring parties improve their respect of the laws of war, I am afraid we must expect more epidemics in the future.

Yemenis are resilient people, but how much more must they resist? We have seen, in Syria and elsewhere, how two years of conflict turns into six, ten. Yemen’s fate can be different, but I see few signs of hope. The suffering of its people only grows in intensity. I’ve met families forced to make impossible choices about whether to buy bread, water or medicine for their children.

Thousands of people have been detained by parties to the conflict, languishing in prison unable to contact their loved ones. Yesterday, some of their families protested outside our offices in Sana’a, demanding answers. Their wellbeing is our priority, but to help them we must be allowed to visit detainees.

I’ve seen for myself this week how war is destroying cities, communities and families.

This, then, is an urgent plea for behaviours to change. It is imperative that parties to the conflict stop the attacks on hospitals, and electricity and water plants. Otherwise, more tragedy will ensue.

The warring parties, including coalition states, should take concrete steps, now, to alleviate the situation. They must

Moreover, others providing support to the warring parties in Yemen have the responsibility for making sure the laws of war are respected.

Humanitarian funding is more needed than ever. But the international community must go a step further. It must actively seek out solutions to this enormous crisis, and wield influence over the behaviour of warring parties as a matter of urgency.

The ICRC has doubled its Yemen budget this year to over USD100 million. We will continue to fight cholera and do all we can to help the most vulnerable people in Yemen. I call on others to step up their efforts and do likewise. The people I met this week in Yemen are counting on us to come to their aid. Let us prove to them that we care about their plight.

The population of Yemen is 27 million people. An estimated: