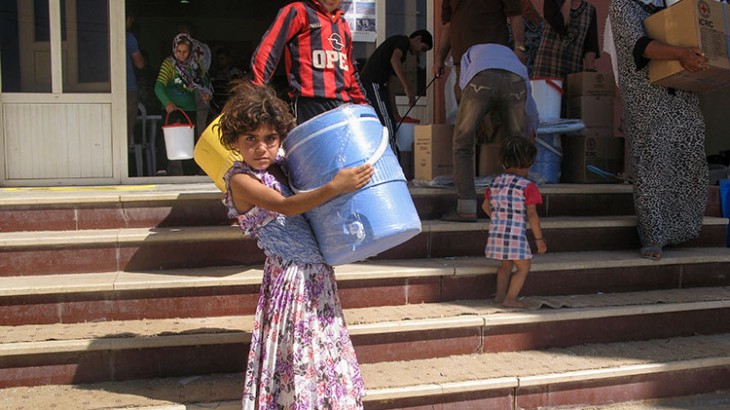 Peter Maurer, ICRC President: There are key issues that must be addressed if we are to end the suffering in Syria.

Four months ago, in one of the most complex and dangerous humanitarian operations of the Syrian war, more than 35,000 people were evacuated, in just eight days, from eastern Aleppo. It was facilitated by the International Committee of the Red Cross and our colleagues in the Syrian Arab Red Crescent. Hundreds, if not thousands, of lives were probably saved.

The scenes that my colleagues witnessed in Aleppo were truly heart-breaking. A family of six orphan children wandering around the bombed-out landscape, lost. The eldest: a seven-year-old girl. The youngest: a seven-month-old baby boy. They hadn’t eaten for two days.

Disabled people, in ragged clothes, confused and helpless, sitting around open-air fires, hugging each other to stay warm. An old woman hobbling around, carrying her life’s possessions in a plastic bag.

And similar scenes on the other side of the front line. More than 1,200 people were evacuated from the towns of Foua and Kefraya. Desperate civilians who had lost everything. Including hope.

Every day our staff live, and witness, the Syrian war. We’ve done so from the start and will continue to do so, as this conflict is not over. As we all know, while we are sitting round this table, fighting is ongoing.

The needs are massive

6.3 million people are internally displaced – the highest such figure in the world. In the first three months of this year, the ICRC and our colleagues from SARC provided 1.3 million people with food. Nearly half a million were provided with essential items such as blankets, winter clothes, mattresses. We helped provide safe, drinking water for 7 million people. Other humanitarian organisations are also doing their best.

A few hours ago, I was in touch with my colleagues on the ground in Hama, an area that has suffered terribly during the conflict, with hundreds of thousands of people having been uprooted from their homes. Our team, working alongside the Syrian Arab Red Crescent, is in a village hosting many of the people who have fled the fighting. Ten days ago, several thousand more people arrived. The majority are women and children: all of them in a great state of confusion and fear. I was told that some of them have been displaced more than three times. We’re providing food, mattresses and other essentials.

If we are to reduce the suffering in Syria, there are a number of key issues which must be dealt with, as a matter of urgency.

First, there needs to be greater respect for international humanitarian law. Hospitals hit, health and humanitarian workers killed. Heavy explosive weapons used in densely populated areas. Civilians and civilian infrastructure targeted. Where are the limits to this conflict? Why are humanitarian obligations being ignored? It’s time to be more innovative and use humanitarian law in ways that will help and protect people.

It’s vital that States abide by the norms of war. And encourage others, including non-State armed groups, to do the same. A number of measures need to be taken.

There needs to be more careful consideration as to what actually constitutes ‘military necessity’ and how civilians can be better protected during military operations. There needs to be periods of calm where those most affected by the violence, are given time to recover. Demilitarized zones could be established around critical infrastructure such as hospitals and schools. If measures like these are not taken, the road back to normality – once the guns finally fall silent – will be fraught with difficulty.

Second, whilst a political solution is urgently sought: unconditional, unimpeded and safe access must be granted to humanitarian organisations. And this access must not be dependent on political factors. Frontline humanitarian negotiations must be de-coupled from military and security arrangements to negotiate a cease-fire. Such negotiations must also be de-coupled from political mediation efforts to solve the deeper roots of this conflict. Humanitarian, military and political solutions should not – they cannot – be dependent on one another. Do not tie the hands of humanitarian workers who seek nothing more than to relieve the suffering of people.

And when we do have a political solution, it must viable and sustainable.

Third, the issue of the missing. Thousands of families remain separated. Many of them living for years with the anguish of ‘just not knowing’. Have their loved ones been kidnapped? Or killed? Or detained? Again, when the long road to reconciliation begins, this issue will be of central importance. The issue of missing people must not become an issue of political concession. It must remain a humanitarian concern where the different parties work with humanitarian organisations, like the ICRC, to find solutions.

Fourth, we must not forget the regional impact of this conflict. The shockwaves from the Syrian war have been severely felt in neighbouring countries. More than five million Syrians have been forced to flee abroad – most of them to neighbouring countries. This is an enormous burden. Our regional partners in the Red Cross and Red Crescent are doing their best. But let’s not underestimate the scale of the task – for everyone.

I commend the work of our colleagues in the Syrian Arab Red Crescent with their 11,000 volunteers working on the ground in every part of Syria. They have made enormous sacrifices trying to bring help to the most vulnerable. Sixty-three of these volunteers have paid with their lives.

It’s important that we reaffirm our commitment to Syria and the Syrian people. Generous funding is needed from all those with the capacity to deliver. There needs to be a stronger determination to influence parties to the conflict into compromise. And there needs to be a clear message to the Syrian people: You are not forgotten. We hear you. We are trying. And there will be an end to this nightmare.

Four months ago, amidst the freezing temperatures of the Aleppo evacuation, a dirty and bloodied ambulance of the Syrian Arab Red Crescent sat in the middle of no-man’s land. In the back, medics struggled to help a pregnant woman. Around midday, perhaps against the odds, the mother gave birth to a baby girl. The baby was called Houreyya – which means ‘mermaid’. A few hours later, mother and daughter along with many others, were bussed out of no man’s land – and into an uncertain and unpredictable future.

Welcome to the world Houreyya.

Let us, try to lay the foundations for a better world for Houreyya – and for so many like her.

Adapted from a speech given by the President to the European Commission Conference on the Future of Syria, Brussels, 4 April 2017.