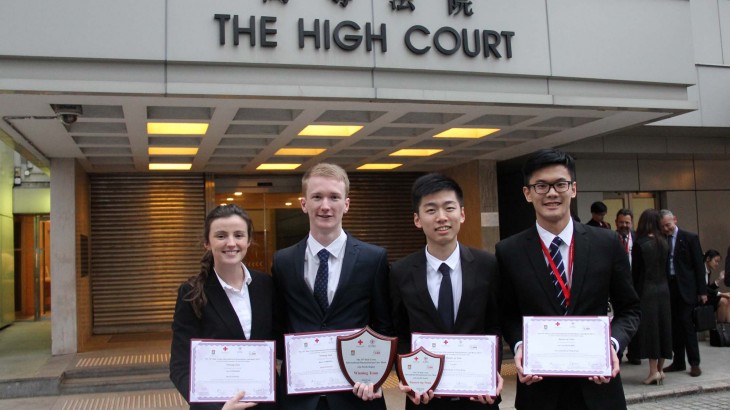 After four days of competition, Bond University from Australia was proclaimed the winner of the 15th Red Cross International Humanitarian Law Moot Competition in Hong Kong. The only team participating from India this year — National Law School of India University, Bangalore — reached the quarterfinals of the competition and bagged the prize for the second honourable submission for their memorial. University of Hong Kong stood runners-up at the annual competition in which around 100 law students represented 24 teams from 21 cities/universities across the Asia Pacific region.

Held from 8 to 10 March 2017 and co-organized by the Hong Kong Red Cross and the ICRC, the competition aimed at challenging and testing participants’ knowledge of international humanitarian law (IHL) and to spread knowledge of IHL throughout the region and beyond.

“There is no doubt that the academic community has an important role to play in the promotion and development of International Humanitarian Law (IHL).” said Pierre Dorbes, Head of the regional delegation of the ICRC for East Asia. “Through activities we hold with students and academics, the ICRC seeks to create greater awareness of IHL in today’s world. It endeavours to ensure that future decision-makers and opinion-leaders understand the relevance of IHL in protecting victims of conflicts.”

Understanding Rules and Regulations of IHL

Originally a local event in Hong Kong, the competition has grown into a regional edition involving more and more teams from across the Asia Pacific region.

“It started from two teams in HK to now, 24 teams from 21 cities in the Asia Pacific region,” said Edward K M Tam, Deputy Secretary General of the Hong Kong Red Cross. “One of the responsibilities of the Red Cross Movement is to encourage the understanding and respect of IHL. One of the ways to advocate for that is to organize moot competitions among student.”

“It’s important to have an understanding about the rules and regulations of IHL. This branch of Law ensures respect for humanity and human life during times of armed conflicts,” said the Honorable Mr. Justice Patrick Chan, Non-permanent Judge of the Court of Final Appeal in Hong Kong, who has been acting as a judge for the regional moot for 14 years. “It is so important to promote the rules that ensure respect for human life, human values and humanity through the study of the IHL among students, particularly the younger generation.”

Mr. Chan also said that he hoped in the future the Asia Pacific regional competition could become a global event.

In cooperation with the national societies and the academic circles, the ICRC works to raise awareness and spread knowledge of IHL. Moot-court competitions are one way of achieving this aim.