It is estimated that approximately 340,000 people died immediately and within the five years following the atomic bombs being dropped on Hiroshima and Nagasaki on 6 and 9 August 1945. Since then, the world has come to understand the catastrophic effects of nuclear weapons. As long as these weapons exist there remains a danger of intentional or accidental nuclear detonation. Add to that a lack of capacity of the national and international community to effectively respond to such a humanitarian catastrophe. 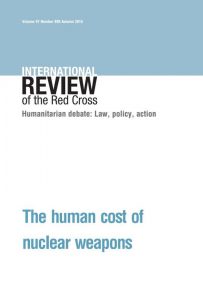 The Regional Delegation of the ICRC in New Delhi organised a discussion on October 7, 2016 on the Human Cost of Nuclear Weapons which was followed by the launch of the special edition of the International Review of the Red Cross (IRRC) on the same topic.

The discussants included Ambassador Sheel Kant Sharma, Nitin A Gokhale, verteran journalist and strategic analyst, Vincent Bernard, Editor-in-Chief of the IRRC, and Dr Rajiv Nayan, senior research associate at the Institute for Defence Studies and Analyses. The discussion — chaired by Raj Chengappa, group editorial director for the India Today Group — touched upon numerous aspects such as the risks posed by nuclear weapons, norm-building in the international community and disarmament, among others.

From the day of the bombing in 1945 to today, the International Red Cross and Red Crescent Movement (the Movement) has been responding to the needs of victims and has been consistent in its opposition to the use of nuclear weapons.

Before the Delhi event and in her statement to the United Nations First Committee on 12 October, 2016 in New York, Ms Christine Beerli, Vice President of the ICRC, underlined the unique opportunity States have to make progress towards prohibiting and completely eliminating nuclear weapons.

The ICRC has also released a Law & Policy e-briefing that shows the catastrophic humanitarian consequences of nuclear weapons. 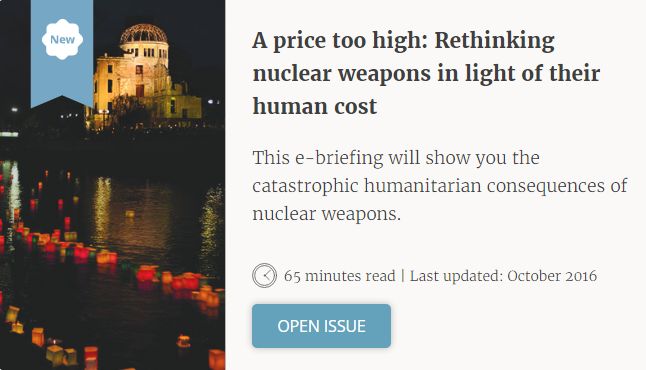