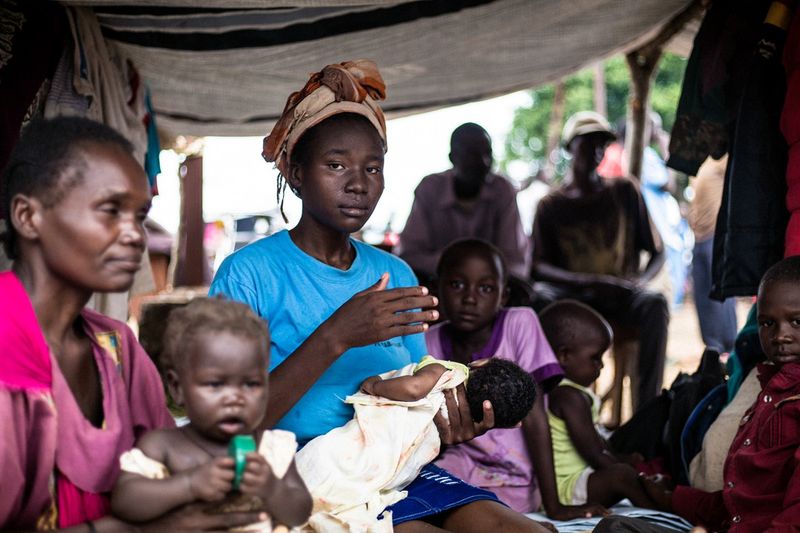 Women waiting to receive food from the ICRC at the Biringi displacement site approximately 25 kilometres from Wau. ©ICRC, Alyona Synenko

The International Committee of the Red Cross (ICRC) remains extremely concerned about the humanitarian situation after several days of armed clashes in Juba, South Sudan.

We are particularly worried for the civilian population and those wounded in the fighting. Heavy rains have made the situation even more dire for those displaced.

On Monday morning, the South Sudan Red Cross (SSRC) teams managed to move in a few areas in the centre of Juba and were followed by ICRC teams in the afternoon. The ICRC teams could only access seven sites in a small part of the city, in order to try and assess the humanitarian situation.

As an immediate relief measure, we were able to provide some urgent assistance for the people who have been displaced or wounded during the recent fighting, as follows:

Displaced
Food assistance (such as sorghum, beans, salt, sugar and CSB [corn soya blend]) to cover needs from 3 to 6 days was delivered to:
– Around 100 patients, families and staff as well as civilians (mostly women and children) who took shelter in the PRRC orthopedic centre supported by the ICRC;
– 100+ people, mainly women and children, displaced in the SSRC compound;
– Approximately 3,000 people displaced in Saint Joseph Parish Church;
– 500 people hosted in the Anglican Cathedral compound;

Wounded and dead
– Provided medical supplies and essential drugs to Juba Teaching and Juba Military Hospitals to care for the wounded;
– Engaged in the management of mortal remains in cooperation with SSRC.

Priorities
In coordination with the SSRC, the ICRC will continue to expand its relief operations if the security situation allows. This will involve prioritizing the immediate needs of the wounded, sick and displaced, as well as the management of mortal remains. We are working on our water treatment station at the Nile to make it operational as soon as possible, in order to provide clean water to the affected population.

While the security of our staff remains a priority, we are committed to responding to the humanitarian needs of those affected by the recent fighting in Juba.

Currently, our operations continue in the rest of the country. In Wau for example, in addition to food, shelter and health assistance to the people displaced in the town and in rural areas after fighting erupted two weeks ago, we have facilitated more than a thousand phone calls so that people can reconnect with their loved ones. Our support to Maiwut and Kodok Hospitals also continues.