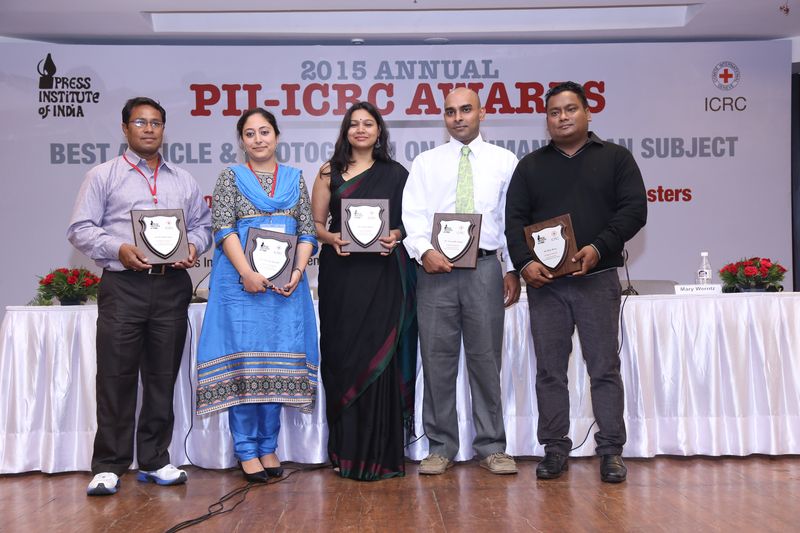 Winners of the 2015 Annual PII-ICRC Awards for Best Article and Photograph on a Humanitarian Subject. ©ICRC, A Bhatia

Independent journalists from different parts of the country bagged all the awards in the ‘Best Article on a Humanitarian Subject’ category of ICRC-PII 2015 Annual Awards this year. While Neha Dixit from New Delhi bagged the first prize, it was Kashmir-based Shazia Yousuf who was awarded the second prize. The third prize in the print media category was shared by Guwahati-based Priyanka Borpujari and Saurabh Yadav from New Delhi. In the ‘Best Photograph on a Humanitarian Subject’ category, photojournalist Biju Boro of Asomiya Pratidin and Rishabh Jain of Dainik Bhaskar jointly bagged the third prize. The first and the second prizes in the photograph category was not awarded this year.

Congratulating the winners, Mary Werntz, Head of the ICRC New Delhi Regional Delegation, said, “I am hoping that our winners today will re-dedicate themselves to their profession and see the awards being given to them as a call to greater service not just for their profession but in the service of humanity”. She further added, “The power of the media cannot be over-emphasised and there can be no greater service, in my humble opinion, than leveraging that power for the good of the human being, especially those caught up in the throes of conflict, violence and in some cases, natural disasters.” 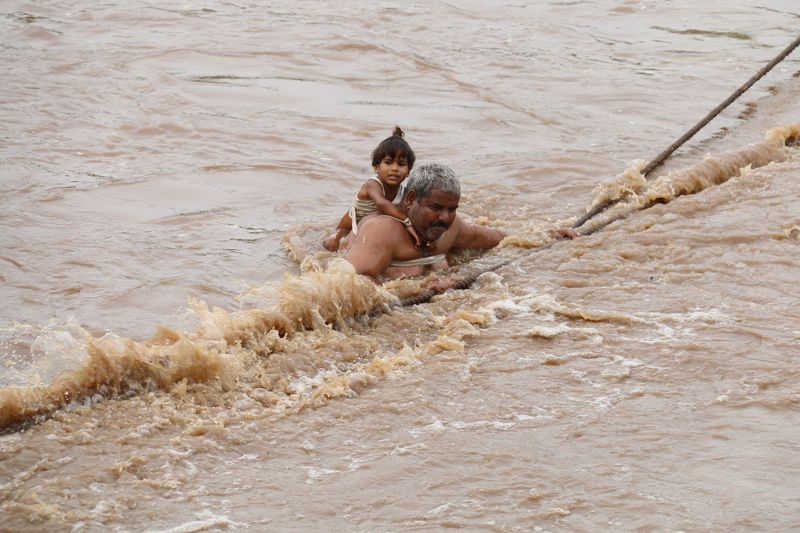 This photograph of a diver rescuing a girl in Sisarma village of Udaipur won the joint third prize for best photograph on a humanitarian subject. ©Rishabh Jain, Dainik Bhaskar

For both the categories, a total of 85 entries were received and they covered a wide variety of humanitarian issues, ranging from the floods in Kashmir to the earthquake in Nepal and reflected on how these impacted the lives of communities caught in their path. Some entries provided an exposé of the condition of women and children in emergency situations — issues that are often ignored by the mainstream media.

Sashi Nair, Director, Press Institute of India (PII) said, “The huge number of entries and high quality of the content submitted understandably made the job of the judges rather tasking and challenging this year. It’s encouraging to see that the competition is getting bigger and more challenging every year.” The jury members for the press awards this year included Seema Mustafa, Senior Journalist and Author; Dr Jaya Shridhar, Journalist and Health Adviser; Srinivas Burra, Assistant Professor, South Asian University and Wasbir Hussain, Political Commentator and Strategic Analyst.

The ICRC and the PII started the annual competition in 2008 in an effort to recognize the work of Indian journalists in the field of humanitarian reporting, where they throw the focus on human suffering caused by armed violence and the extraordinary resilience shown by people in such situations.

The ICRC is an independent and non-political organization with a large scope of activities which it undertakes through its presence in most countries. Its existence and activities are universally recognized and it regularly responds to the needs of people adversely affected by situations of humanitarian concern, in particular armed conflict and violence. PII is an organization working for upholding the standards of journalism in India through research and training programmes.