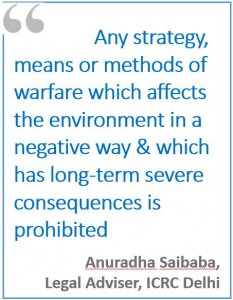 While it is common knowledge that International Humanitarian Law (IHL) protects wounded and sick soldiers on the battlefield, the wounded, sick and shipwrecked sailors at sea, prisoners of war, and civilians; only very few people know that it also protects the environment.

The International Committee of the Red Cross (ICRC) – which promotes respect for IHL as a key part of its work – has time and again expressed concern on the consequences of armed conflict on the environment as this may grievously affect the ecosystem required for the sustenance of human life.

Under IHL, “means and methods of warfare which are intended, or may be expected, to cause widespread, long-term and severe damage to the natural environment” are prohibited. It was in 1976 that the international community adopted the Convention on the Prohibition of Military or any Hostile Use of Environmental Modification Techniques – or the ENMOD Convention. This was a further demonstration of the resolve of the international system to strengthen mechanisms designed to ensure that the environment is sustainable.