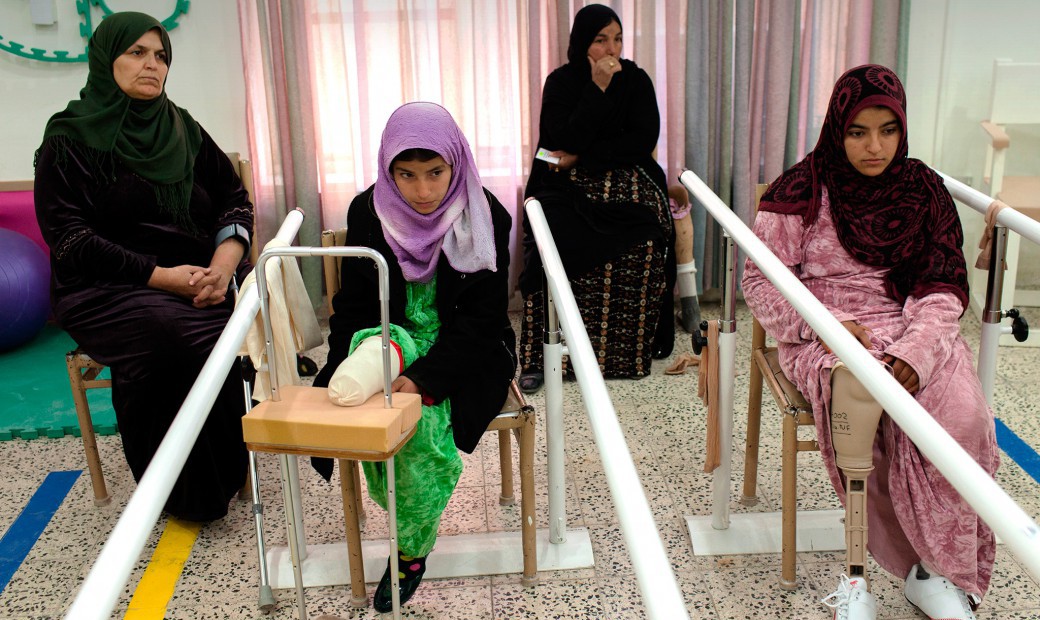 Maserieh Sahar, 13, (left) and her sister Saeda, 16, both lost their left legs to anti-personnel landmines. With the help of their mother (sitting behind them), they are learning to walk on their new prosthetic legs at the ICRC’s physical rehabilitation centre in Erbil, Iraq. ©Getty Images, ICRC, Marco Di Lauro

In the past decade, over 50,000 people have lost an arm, an eye, a leg or their lives to anti-personnel landmines and other explosive remnants of war (ERW).

The 1997 Anti-Personnel Mine Ban Convention and the 2008 Convention on Cluster Munitions – which ban the use, production, stockpiling, and transfer of anti-personnel mines and cluster munitions, respectively – have had a dramatic impact. Since the adoption of these treaties, the number of victims worldwide has declined sharply.

This is extraordinary progress. Even so, the mission of these Conventions is not complete. Much land still remains to be cleared and many survivors are still suffering.

In late 2013 and in 2014, the ICRC sent five photographers to five countries – Bosnia and Herzegovina, Iraq, Laos, Mozambique and Nicaragua – to document the human toll exacted by mines and other ERW. The images capture both the dedicated work of those involved in clearance operations, and the anguish and resilience of survivors. View the gallery.

The ICRC is active in mine-clearance efforts in many other countries, such as Afghanistan, Cambodia, Chad, the Democratic Republic of the Congo, El Salvador, Ethiopia, Guinea-Bissau, India, Iraq, Myanmar, Niger, Pakistan, Peru, South Sudan, Sudan, Tajikistan, Ukraine and Yemen. It collects and analyses data, and surveys and clears landmines and other ERW; it also undertakes activities in connection with risk reduction and risk education. In addition, victims of landmines and ERW benefit from physical rehabilitation, surgical care and economic security programmes provided by the ICRC.

For information on the ICRC’s work to help people with physical disabilities, go to: http://sfd.icrc.org

Eradicating landmines: No time to lose