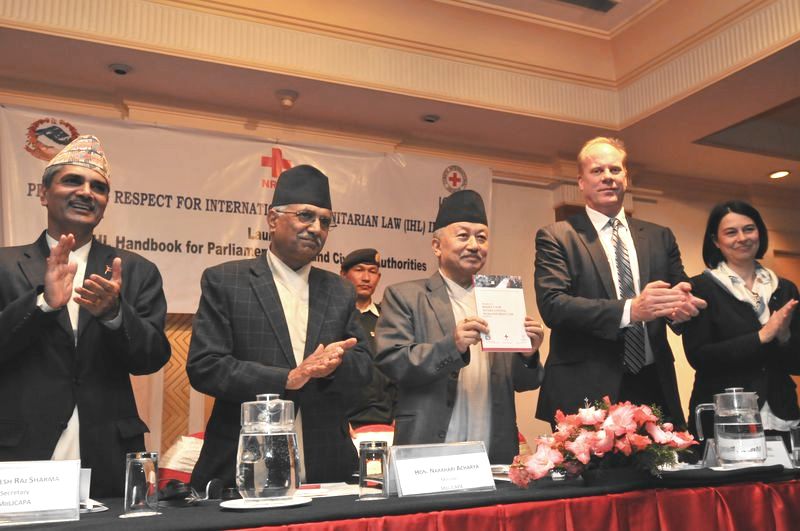 A handbook for parliamentarians and other civilian authorities titled “Promoting Respect for International Humanitarian Law in Nepal” was launched in Kathmandu on 16th March at a ceremony organized by the National IHL Committee, Government of Nepal, together with the International Committee of the Red Cross (ICRC) and the Nepal Red Cross Society (NRCS).

The handbook was unveiled by chief guest and Chairman of the Constituent Assembly of Nepal, Subas Chandra Nembang. Addressing the gathering, Nembang said Nepal should draft laws and execute them according to its international commitments. He further added that the handbook on International Humanitarian Law (IHL) could help the lawmakers become aware about their roles in fulfilling international commitments made by the state. “There is no doubt the handbook is a useful and important publication for all in this field,” said Nembang.

Bhes Raj Sharma, Secretary at the Ministry of Law, Justice, Constituent Assembly and Parliamentary Affairs, along with Dilli Raj Ghimire, Member Secretary of Nepal’s National IHL Committee, Dragana Kojic, Head of the ICRC delegation in Kathmandu, and Dev Ratna Dhakhwa, Secretary-General of the NRCS, also spoke at the event.

Explaining why the publication specifically addresses parliamentarians and civilian authorities, the ICRC Head of operations for South Asia, Anthony Dalziel said, “Parliamentarians have a unique and extensive role when it comes to the implementation of IHL obligations. While the ultimate responsibility under the Geneva Conventions for the implementation and dissemination of IHL must fall to the executive, parliament has a critical role to play.” He further elaborated, “Parliamentarians can achieve this by initiating discussions, engaging in informed debate, promoting the development of new IHL instruments, encouraging treaty ratification and advocating for IHL training sessions for the armed forces.” 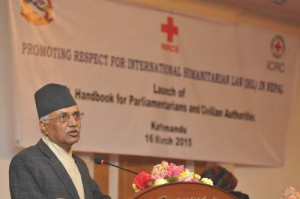 The ceremony was chaired by Narahari Acharya, Minister for Law, Justice, Constituent Assembly and Parliamentary Affairs, who also chairs the National IHL Committee of Nepal. Acharya said that the government has been working in the direction to fulfil its commitments made in international forums. “Since this handbook aims at informing parliamentarians and civilian authorities what IHL is, what steps the state should take to fulfil its obligations towards IHL, as well as the role of parliamentarians and the civilian authorities in the process, we have considered it to be of high importance,” added the minister.

The Minister and the Secretary of Ministry of Law, Justice, Constituent Assembly and Parliamentary Affairs, as well as the Member Secretary of the National IHL Committee of Nepal reiterated that the national committee, following wider consultation with stakeholders, has already drafted a bill on the Geneva Conventions which has been forwarded to the Ministry of Defense.