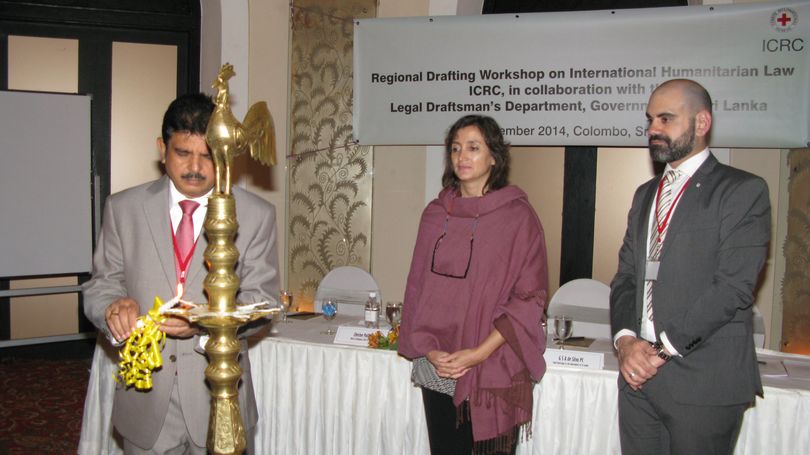 Legal representatives from Afghanistan, Bangladesh, Bhutan, Iran, Maldives, Nepal, Pakistan, and Sri Lanka gathered in Colombo, Sri Lanka, on 2-3 December 2014 for the South Asia Regional Drafting Workshop on international humanitarian law (IHL). The workshop, the first of its kind to be held in this region, was conducted in collaboration with the Department of the Legal Draftsman, Sri Lanka. 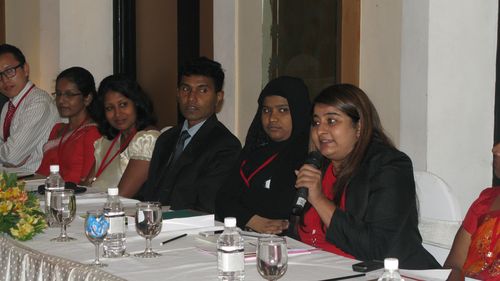 A participant introduces herself at the workshop to facilitate an open discussion. ©ICRC/Channa Jayawardene

Mr GSA De Silva, PC, legal draftsman of the Government of Sri Lanka, attended the event, along with Mr Nalin Abeysekara, PC, the former legal draftsman, who conducted a session on the best practices of ‘Translating treaty obligations into national law’.

Mr Charles Sabga, ICRC’s legal adviser from Geneva, and Mr Sunod Jacob Matthew and Ms Supriya Rao, legal advisers from New Delhi, presented on the Geneva Conventions and their Additional Protocols, the Convention on the Prohibition and Restriction on the Use of Certain Conventional Weapons and its Five Protocols, and the strengthening of domestic implementation of IHL.

Participants were given the opportunity to analyse the material in working groups. The workshop ended with a peer-to-peer exchange on the experiences and challenges in strengthening IHL implementation and the role of the legal draftsman in national IHL committees — a valuable exercise providing participants insight that could support them in their legal roles in a domestic capacity.