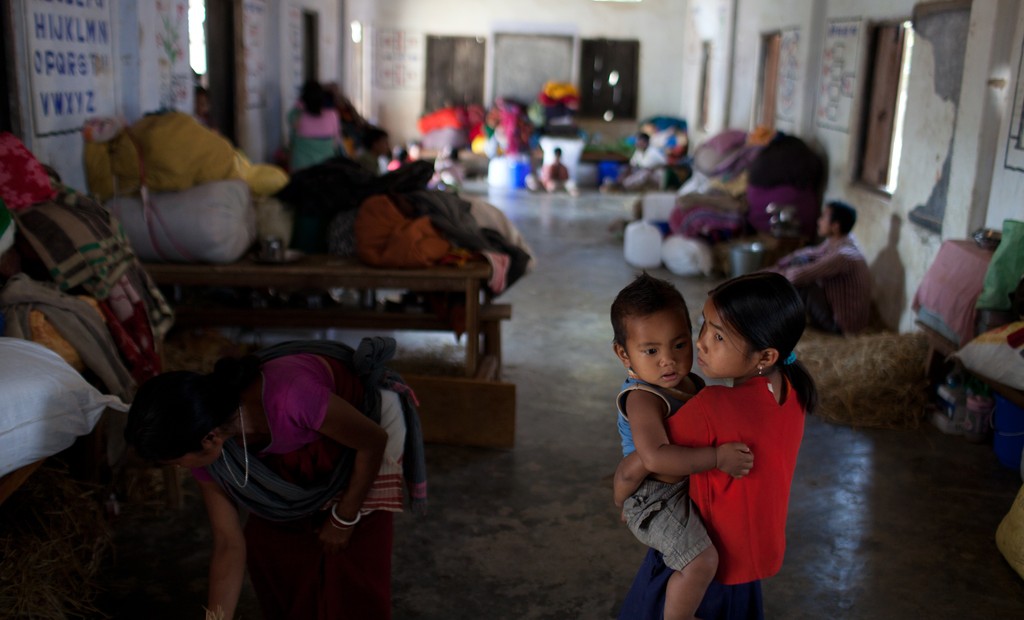 Children from the Rabha tribe at a school that served as an IDP camp in Goalpara, Assam, India, Feb. 4, 2011. Because of armed violence over land issues between the Rabha and Garo tribes several thousand people were displaced. © ICRC/Daniel Etter

Bienvenu Bandios, a Central African Red Cross volunteer, was killed when he was hit by a bullet on August 20 while evacuating casualties in the “km 5” zone of capital city Bangui.

Violence against patients and health care workers is one of the most crucial yet overlooked humanitarian issues today. The Red Cross and Red Crescent Movement runs a global campaign aiming to improve security and delivery of impartial and efficient health care in armed violence and other emergencies.

The ICRC, through workshops, discussions and seminars, addresses the issues and challenges to health care access, in the face of perpetual instability in certain parts of the country.

The ICRC New Delhi Blog requested Dr Samrat Sinha, an expert on the subject of access to health care in emergencies, to write an article to shed light on the issue. Dr Sinha has written a paper based on a detailed study undertaken in Manipur, entitled ’Vulnerabilities of Health Care Infrastructure’. He also co-authored a paper on the Indian Journal of Medical Ethics entitled ’Healthcare workers in conflict zones — fright or flight’. He is assistant director at Centre for Study of Political Violence, Jindal School of International Affairs.

Protecting healthcare in areas of civil strife: A review of evidence

The occurrence of armed violence in the Indian context is a phenomenon which is well explained but not well understood. While field conflict studies has well-developed intellectual traditions and generates serious research on the causes of various armed conflicts in contemporary times, the lack of debate surrounding the fundamental questions of social scientific methodology has constrained the field, especially in the ability to generate empirical research and policy prescriptions that are useful (mainly for humanitarian programme planning, conflict response and peacebuilding). The most serious result of this lack of methodological debate has been the overlooking of grievous empirical consequences of this armed violence. Some of the direct impacts are mortality,[1] injuries,[2] sexual violence,[3] psychosocial trauma[4] and disability. Indirect impacts include forced internal displacement[5], widowhood (as well as the creation of orphans)[6], child soldiers[7] and detention[8], among many others.

While many of these impacts are felt by individuals (and specific social groups) and have been documented, it would be critical to point out that there is a burgeoning area of research on the constraints placed by armed violence on the provision of lifeline services in these regions (especially education, nutrition, and healthcare). Given prior existing work on education[9] and nutrition,[10] the review seeks to simply put forward the current state of knowledge on the least studied sectors — that is healthcare provision — in regions affected by armed violence. The article also reflects on further avenues for policy-relevant research. Five major arguments are provided in the course of the article:

Overview of violence, mortality and forced internal displacement in India

Prior to mapping the existing state of knowledge on the situation in India, it would be pertinent to provide an overview of the current statistics available on past and contemporary violence experienced in the Indian context. Currently, the Institute of Conflict Management (ICM)’s South Asia Terrorism Portal (SATP) is the most important clearing house for statistical data on armed violence-related mortality. The summary statistics provided below are a cause for serious concern.

The baseline mortality data is available between 1988 and 2014 for Jammu and Kashmir (J&K), 1992 to 2014 for Northeast India (Assam, Arunachal, Manipur, Meghalaya, Mizoram, Nagaland and Tripura) while for so-called left-wing extremist (LWE) affected districts in Central India, data is available from 2006 onwards. The data is cumulative and includes aggregated numbers of civilians, non-state actors and security forces. A total of 70,006 deaths have been documented by ICM-SATP while data on injuries is unavailable.

Figure 1: State-wise distribution of fatalities in civil strife in India[11]

It is increasingly being recognized that health care workers (and institutions) are at the frontline of any situation of armed violence not only because they provide immediate life-saving treatment to victims (especially those who are injured or forcefully displaced) but also due to the fact that they have to maintain continuity in the routine functioning of hospitals, related services and programmes. In the Indian context, this also includes ensuring the functioning of state-led immunization programmes, providing maternal and child health services as well as maintaining the various components of the primary rural health care system. This is especially being done in areas that are remote, geographically inaccessible and have poor infrastructure (which also further compounds the maintaining of the medical supply chain). Last, underlying all these constraints is the unwillingness of health functionaries to operate in such areas due to a variety of factors (such as poor incentives), including armed violence.[13]

Accordingly, from the standpoint of social science research, two questions exist: First, how does one trace the process by which health services are breaking down specifically due to armed violence; second (from the perspective of resilience) is the need for knowledge on “the types of security conditions that threaten the average working day of local health care workers.”[14] These are risks despite which they continue their professional duties.

The ICRC’s Healthcare in Danger (HCiD) Project has also recognized this duality and stated:

“….disruptions to health care caused by violence are less visible and more difficult to measure than overt attacks against health-care personnel and facilities. But they are just as deadly for all the wounded and sick who never manage to reach the help they require.”[15]

The lack of methodological interface between social science, conflict studies and public health research has meant that causal mechanisms linking violence and health care service delivery failure have not been investigated in India, although certain outcomes have been identified in various official and civil society fact-finding reports.[16] On the other hand, the latter question (on safety of healthcare workers or institutions) has generated some preliminary studies that are summarized in the table below. These have been classified based on a typology provided by Rubenstein and Bittle (2010).[17]  It is clear from the table below that risk to health workers (institutions) in both situations of armed violence and complex emergencies along key indicators are vastly underdeveloped with only two studies being identified until now.

The risks and burdens on overall health systems due to armed violence have thus largely remained unknown, yet the adverse consequences of these breakdowns are extremely real. For instance, the following field assessment in the immediate aftermath of the Kokrajhar ethnic crisis of 2012 states:

“Existing local health system in affected districts was disrupted due to the scale of the problem. This is especially heightened by the need to extend the existing services to new camp populations. This has increased workload of doctors, ANM and ASHA who are working now with patients for whom they do not have medical records or detailed case histories. For instance, in Dhubri District, Bilasipara sub-division, existing sub-PHC is also now fully responsible for extending services to around 4000 internally displaced persons (IDPs) in 4 camps. This is in addition to the normal workload of the local healthcare workers.[18]”

The report makes the following observations:

“Inability of doctors and ASHA/ANMs to access camps and work in camps due to ethnic conflict. Minority healthcare workers are unable to work in majority camps and vice-versa. In addition, there are cases of existing sub-PHCs (like Bangtol in Chirang District) that have been converted to relief camp, which has meant non-functioning of the health centre.[19]”

Ongoing situations of civil strife emanating from  various insurgencies as well as recurring episodes of large-scale ethnic violence have led to severe socio-economic burdens. These effects have been ignored by mainstream conflict studies and health systems research. Health care represents one of the last bastions of political neutrality in situations of armed violence.

For those experiencing the dehumanizing and deteriorating living conditions in relief camps, health care providers are the only remaining succour from the pervasive sense of fear, abandonment, identity politics and helplessness. In other words, the provision of health care (and allied services) in crisis situations goes beyond being a purely clinical matter and should be seen as one of ethics. The experience in Kokrajhar and accounts from other areas has shown that perceived neutrality of health service provision can be a key factor in shaping the humanitarian space (as opposed to the distribution of material goods, an act that can lead to highly localized contestations). There have been attempts at leveraging this neutrality for promoting peace in other international contexts, but not in India. The fact that health services providers engage with all communities (by virtue of programme and ethical requirements) regardless of ethnic or religious affiliation requires deeper examination, especially in the context of Northeast India.

Another possibility for peacebuilding is that conflicting groups through sustained dialogue eventually provide joint solutions that can overcome barriers to health care access. Finally, all health institutions must be declared as ‘Zones of Peace’. For instance, the Schools as Zones of Peace (SZoP) programme in Nepal provides an important template by which schools were declared as neutral and protected places where armed activities were forbidden.[23] It was also accepted that schools would remain open even during bandhs and blockades. Most importantly, the declaration was accepted by all conflicting parties (state and non-state) and was instrumental in minimizing absence from school despite political unrest.

In conclusion, health service provision in contexts affected by armed violence needs further deliberation. While the evidence based on risk and vulnerabilities requires serious strengthening, advocacy that allows for improving access (and greater protection) to healthcare is also equally needed.

Note: I would like to acknowledge the contribution of Dr. Nobhojit Roy, Dr. Ravikant Singh, Mr. Siddharth David and members of Doctors For You (DFY) for their contributions to studies conducted in Manipur and Assam that are cited in the article.

in Kashmir Available at http://www.hks.harvard.edu/cchrp/sbhrap/projects/kashmir/Half_Widow_Half_Wife.pdf

[8] Rashid, Javaid. “An analysis of self-accounts of children-in-conflict-with- law in Kashmir concerning the impact of torture and detention on their lives.” International Social Work 55, no.5 (2012):629.

[13] Medico Friend Circle and Jan Swasthya Abhiyan. Where there can go no doctor: Report of a preliminary visit to assess the Public health situation in Dantewada, Chhattisgarh (2007). Available at http://cpjc.files.wordpress.com/2007/11/mfc_report.pdf (Accessed August 14, 2014). Also see PHFI and NRHM. Why Some Doctors Serve in Rural Areas:

Posts published on the blog reflect the views of the author alone and do not imply the expression of any opinion on the part of the ICRC.