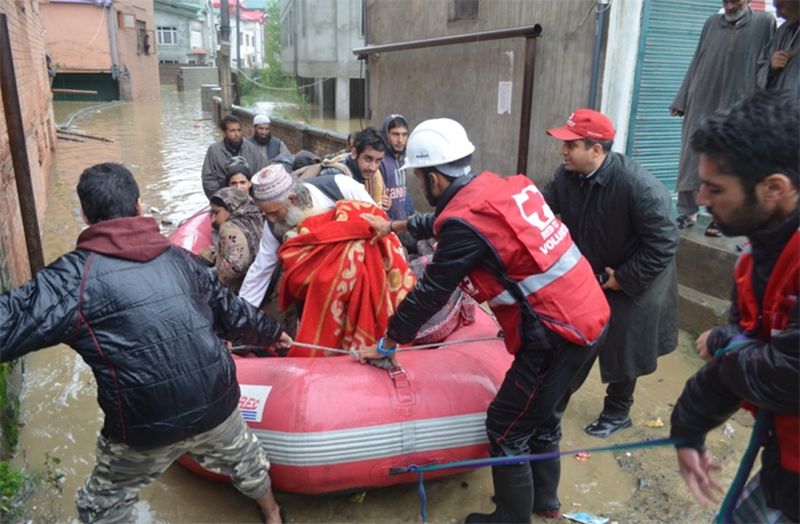 The past week has been very difficult for us, as much as it has been for the people of Jammu and Kashmir and the rest of the country. The devastating floods — reportedly the worst in many decades — which have left hundreds dead and hundreds of thousands homeless in Jammu and Kashmir, have also affected our colleagues in Srinagar.

The ICRC office in Srinagar’s Gogji Bagh area, like most other buildings in the city’s low-lying areas, has been under water since 7 September. With two servers down and no electricity, we lost all contact with our colleagues. The few colleagues we have managed to establish contact with over the week are living in dire straits with practically no food and water, like the rest of the people in the state.

In this tough time, the ICRC expresses its solidarity with the people of Jammu and Kashmir. We are in touch with the authorities and have offered our full support to the administration and the government. We are supporting the relief efforts of the Indian Red Cross Society (IRCS), which is supplementing the work of the government and the Indian Army that are active in relief operations across the state. The ICRC is ready to assist the IRCS with requested relief material. In consultation with the IRCS, we have procured 50,000 blankets, 5,000 solar lanterns and 50 life jackets to be distributed among the affected people in Jammu and Kashmir.

A joint assessment team of the IRCS, the ICRC and the International Federation of the Red Cross and Red Crescent (IFRC) is currently in Jammu, and they will be visiting Poonch and Rajouri, two of the worst-affected districts, to assess the situation and the needs of the people. After the assessment, we may further support the IRCS and the authorities as called upon to do so.

The floods — triggered by incessant rain that left the region’s rivers in spate — have left hundreds dead besides rendering hundreds of thousands homeless and causing massive damage to infrastructure and property. With the skies letting up over the last couple of days, the floodwaters have started to recede, giving rescue teams of the Indian Army and the National Disaster Response Force a chance to reach thousands of stranded villagers and city dwellers. The task ahead — of assessing the damage caused by  the floods  and the needs of the people and rebuilding infrastructure, homes and lives — is mammoth and will require support and cooperation from all quarters. The ICRC stands by the people of Jammu and Kashmir and assures support and cooperation to the best of its ability and prerogative.