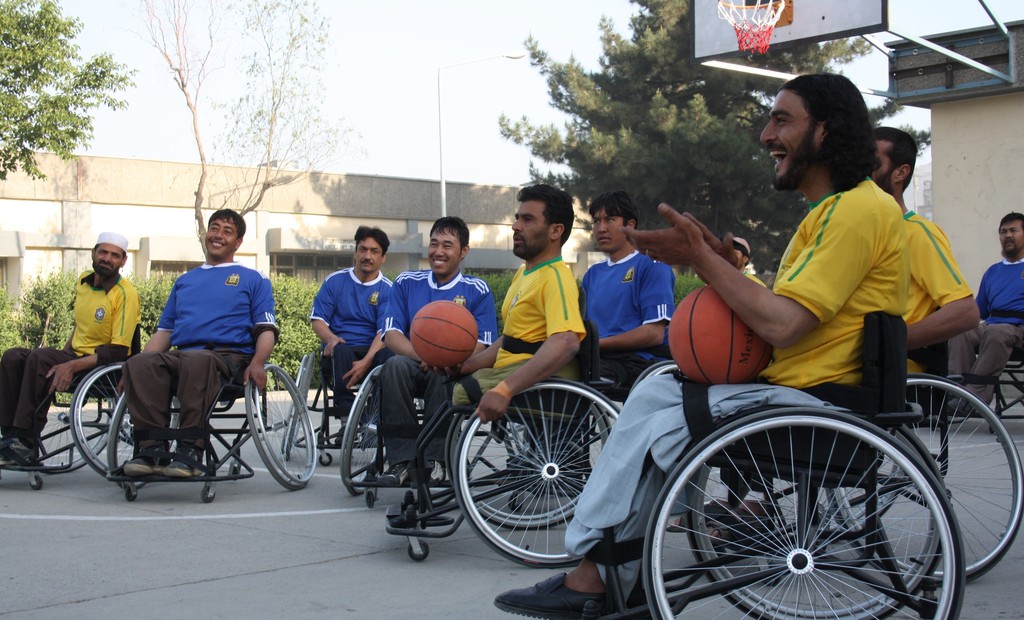 “Until the age of seven, I could only crawl on my hands and knees. Then a friend told my family about the ICRC’s Orthopaedic Centre in Herat and my parents took me there. Today, after years of treatment, I can walk,” says Farhad Mohammadi, a 21-year-old from Afghanistan who was affected by polio.

Farhad can not only walk now. He also plays basketball. And that’s not all. He — along with other young men like him who lost their limbs to disease or disaster and have been rehabilitated by the ICRC — are going to Italy to score a goal or more in a series of matches between 22-29 May. The national basketball team, which was created in 2013 under the aegis of the Afghanistan Paralympic Committee, has been invited by Briantea 84 of Cantù near Milan, the winner of the 2012-13 Italian League. The project is a cooperation between the Afghanistan Para-Olympic Committee and the ICRC, which has been instrumental in facilitating the players’ training.

The team will arrive in Italy on the afternoon of 20 May. They will fly into Milan and then drive to Bologna. The first match is in Bologna on 22-23rd May and the second one will be in Cantù on 28-29 May. While they are in Cantù, the team will meet with students, authorities and other organisations to promote sport for people with disabilities. They will return to Afghanistan on 31 May.

Since 2010, wheelchair basketball players from the ICRC’s orthopaedic centres in Mazar, Herat and Kabul, together with players from Maimana, have been trained for some weeks every year by a US professional basketball coach, Jess Markt, himself in a wheelchair.

“When I announced the invitation to play in Italy, the team was overjoyed,” says Alberto Cairo, the man driving the ICRC’s physical rehabilitation programme in Afghanistan since 1990.

The players are from different parts of Afghanistan, but they speak in one voice when they say how much it means to them to be ambassadors for the disabled in their first-ever tournament abroad.

“I know the Italian players will be hard to beat because they have been playing for years. Nevertheless, our team is talented, too, and we want to show the world that having a disability does not stop one from doing things,” says Farhad.

Mohammad Saber Sultani (24) from Kabul, who lost both his legs at the age of three in a mine accident, says: “We are training for three hours every morning, and two hours every afternoon. Jess, our coach teaches us well. We do get tired but it’s worth it. We are aiming to win!”

As far as Alberto is concerned, they have already won. “Besides the joy and fun of playing — something they were deprived of for years — sport has given them self-confidence and self-esteem,” he says.

It was the combined efforts of the ICRC staff and Jess Markt that has made the wheelchair basketball programme successful, with no small thanks to Motivation, a British charity, for producing, affordable, appropriately- adapted wheelchairs for the Afghan players.

For Alberto, the basketball programme is just a spoke in the wheel of the physical rehab and social integration work he set in motion in the country 24 years ago. It was the late Mahmoud — who after being fitted with artificial limbs by the ICRC, came to Alberto asking for a job so he would not have to beg — who made Alberto realize that physical rehabilitation was incomplete without social integration. “I am a scrap of a man,” Mahmoud had told Alberto. He was later employed by the ICRC as a bench worker in the prosthetics-making unit and regained his dignity during his lifetime.

Alberto says he and his team follow a policy of “positive discrimination”, meaning they try to employ as many disabled people as they can. His wish is that this policy be implemented in other countries as well. For, as he says, “Physical rehabilitation is a priority. Dignity cannot wait for better times.”

Saber, the young player from Kabul headed for Italy, is one such person who was provided a job by the ICRC. His life is much better now, he says. He holds Alberto in very high regard. “For me, when I go to Italy, I would like to see Alberto’s home. He helped me build mine. I would like to see his, too,” says Saber.

To learn more about the wheelchair basketball programme in Afghanistan, click here.

To read coach Jess Markt’s blog posts on how his team prepared for the Italy matches, click here.

To watch Alberto Cairo share his story on a talk for TED, a non-profit devoted to spreading ideas in the form of short, powerful talks, click here.