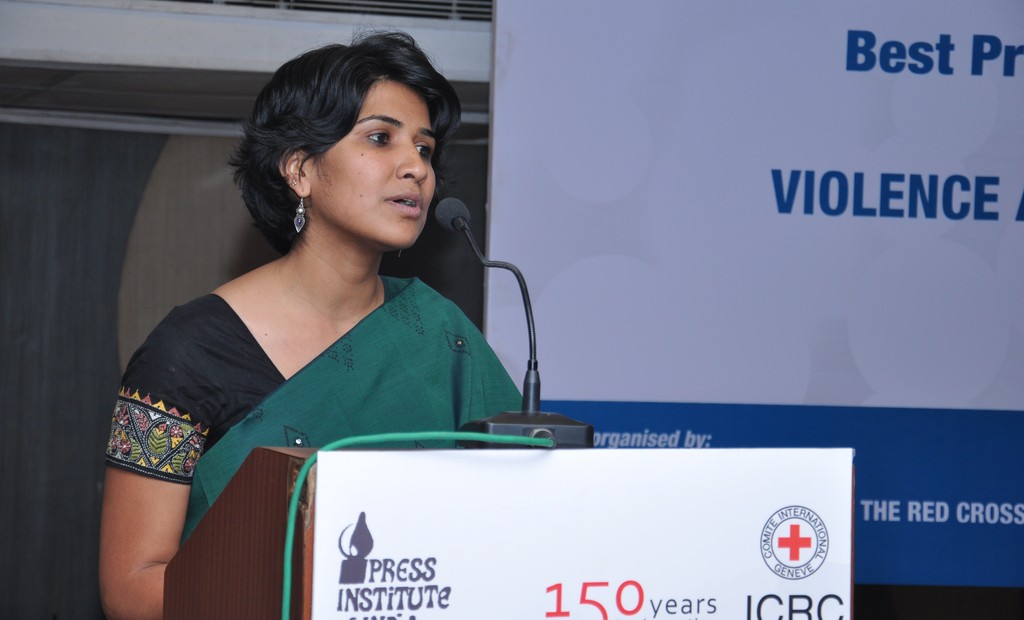 Anumeha Yadav of The Hindu addresses the audience on receiving the first prize. ©ICRC

“It is a great honour. The discussion gave me new perspective on under-reported aspects of conditions of work and risks to medical personnel and health workers in areas affected by conflict and the effect of this on communities”, said a visibly excited Anumeha Yadav, The Hindu’s Jharkhand correspondent, just after winning the PII-ICRC Awards 2013 in New Delhi.

At the press award ceremony organised by ICRC and PII in New Delhi, Mini Thomas of The Week and Imran Muzaffar of The Greater Kashmir were jointly awarded the second prize. The winners were chosen from amongst the 40 entries received. While Mini Thomas got the award for her story on harassment that female health care workers face in hospitals, Imran Muzaffar earned appreciation for his story on ambulance drivers risking their own lives to save those of the patients.”

For Imran Muzaffar, the young journalist from Kashmir, the recognition reflected a sense of achievement. Just after the event, he said, “This award means a lot to me, to my sense of being a journalist and to my family. This award is a hope to get going, doing journalism, in real sense”

Earlier, addressing the media persons at the inaugural of the Press awards ceremony, Mary Werntz, Head of Regional Delegation of the International Committee of the Red Cross (ICRC) in New Delhi said, “Today as we recognise the contributions of media personnel, we also reiterate the critical role that you, as journalists, can play by using the power of your pen. We rely on you to remind all of us of the gravity of the suffering of those denied services.  The ICRC sees you, the media, as not just a messenger but a vital catalyst in shaping how the world responds to these challenges to health care delivery.”

The function was preceded by a panel discussion on the theme “Violence against Health Care Services and Personnel – Operating in The Face of Danger,” moderated by P.N. Vasanti, Director Centre for Media Studies. The panellists who were also the jury members included Pamela Philipose, Director and Editor-in-Chief of Women’s Features Service, Jaya Shreedhar, Founding Member of the Centre for Security Analysis, and A.J. Philip, a senior journalist.

While the underlying theme of the awards have remained same, each year, the topic however have revolved around the key humanitarian challenges. This year the nominations were sought on articles written focusing on “Violence Against Healthcare Services and Personnel – Operating in the Face of Danger”, a topic which is in sync with the ongoing ICRC led global campaign titled   “Health Care in Danger” aiming  at improving the efficiency and delivery of effective and impartial health care in armed conflict and other emergencies.

Speaking during the panel discussion, P.N. Vasanti, Director Centre for Media Studies said, “Media can certainly do enormous to minimise numbers and severity of victims in armed conflict yet it is one of the most crucial overlooked humanitarian issue. And therefore the award winners certainly deserve a lot of encouragement and appreciation.”