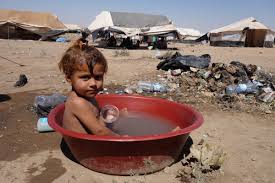 It’s been eight years since fighting began in Syria. Out of 18 million people living in the country, 13.1 million of them require humanitarian aid. One in 2 Syrians have been displaced by the conflict, either abroad or within the country. 1.3 million were newly displaced in last year alone. Years of fierce fighting have left some of the country’s vital services extremely fragile. 50% of health facilities are out of service or partially functioning. 2 million children are unable to go to school, casting a further shadow on the country’s future.

These are bleak and tragic numbers. But many times statistics are hard to visual, inefficient in telling the brutal impact of conflict. To really give a sense of the view from the ground, in this episode of Intercross the Podcast, we start with an audio diary from our communications delegate Sara Al-Zawqari who recently traveled to Al Hol in the northeast of Syria. Then, we talk more about about the situation in Al Hol with Adnan Hezam, ICRC’s media delegate based in Damascus.  Hosted by Niki Clark.