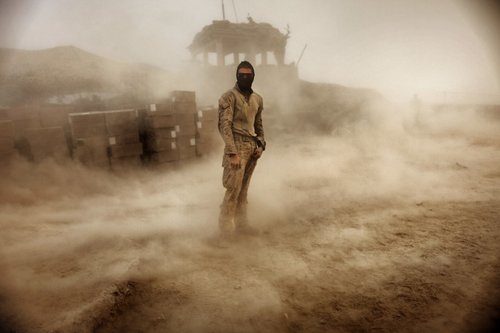 In this episode of Intercross the Podcast,  we are excited to add another iteration to our cultural series, where we explore the intersection of culture and conflict. In this episode, we sit down with war photographers Louie Palu and Finbarr O’Reilly. Palu’s works have been featured in the New York Times, BBC and Smithsonian National Portrait Gallery. He recently released Front Towards Enemy, a book which examines the five years he spent covering the war in Kandahar, Afghanistan. O’Reilly is currently London-based, having spent 12 years in Central and West Africa as a photographer for Reuters. He recently released Shooting Ghosts, a memoir co-written with retired USMC Sgt. Thomas James Brennan, reflecting on the experiences of the war and the unlikely friendship they formed. In this podcast they discuss issues like: How do we consume and engage with images of war? What are the psychological and emotional costs of war for those who photograph conflict? How can photography change the perception that people have of war? Why is this visual documentation important? What is the role of journalists as independent witnesses to war? And how does rocker Henry Rollins represent–for at least one of our guests–how social media and connection has changed the playing field? Hosted by Sara Owens