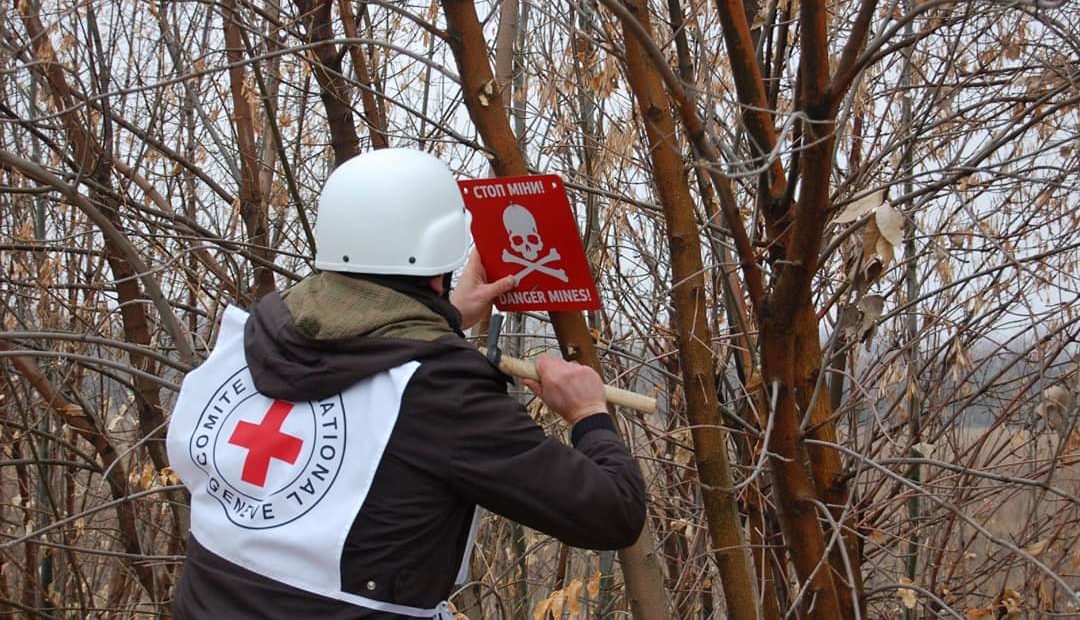 Since 2005, the world marks International Day of Mine Awareness and Assistance in Mine Action on April 4th. Its aim is to increase global awareness about danger that landmines pose to safety, health and lives of people and communities, and to encourage world’s governments to develop mine-clearing programs.

The Donbas region of Ukraine is one of the most mine and explosive remnants of war (ERW) contaminated region of the world. Its inhabitants on either side of the conflict’s contact line are unceasingly affected by mines and ERWs.

A survey conducted by the International Committee of the Red Cross (ICRC) in over 100 settlements in the government-controlled areas of the Donbas, showed that two-thirds of rural and about a half of urban population are directly exposed. Shelling is being cited as the main threat.

Crossing through the Entry Exit Crossing Points (EECP) of the line of contact is the second major security threat according to the people who participated in the survey, due to the mine and ERW threat in the proximity of the EECPs.

Available statistics show that since 2014, over a thousand of civilians have been victim of mine and ERW, while the military victims could be higher. “It may at times appear that lessons about mines and ERWs are learnt, especially given many mine awareness campaigns, alert messages as well as concrete safety preconditions taken by militaries along the contact line during the past six years of the conflict. However, recent reports of mines and ERW victims are a painful reminder that it is never enough”, says Mrs. Florence Gillette, the Head of Delegation of the ICRC in Ukraine.

“It is painful for me to see and hear about the individuals and families whose curiosity-driven loved ones, especially children, lost their lives or health to mines and ERWs”, says Mrs. Gillette and recollects that “those lucky enough to have survived a close contact with mine or ERW have lifelong physical and often psychological consequences”.

A new version of the Mine Action Law, signed by the President of Ukraine in December 2020, is still in process of implementation at operational level. The Law should enable different actors to coordinate their work and adhere to expected standards.

In the Donbas region, the ICRC is aiming at decreasing the threat and the number of incidents related to mines and ERWs. In 2020, the ICRC teams delivered over 6 000 warning signs to mark dangerous areas on either side of the contact line and reached nearly 18 000 people with safety messages. The ICRC cooperated with the Ukrainian Red Cross Society and provided the much-needed support to schools, affected population and communities, as well as supported the construction of 17 Safe Playing Areas along the contact line in the Donbas.

The ICRC will continue to support the authorities in the development of legal frameworks addressing the mine and ERW risks, including in the implementation of legislation and regulations of the mine action.