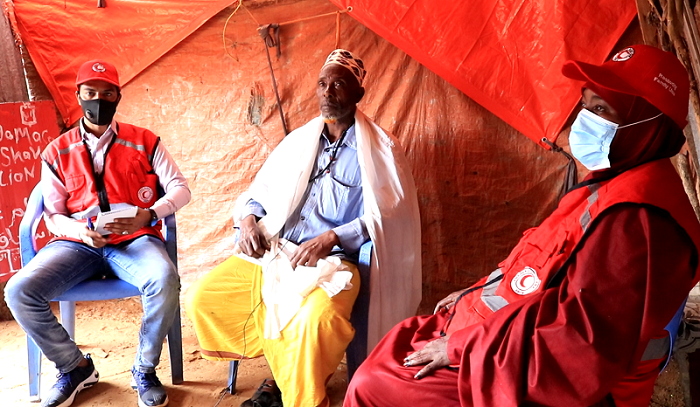 “We didn’t know whether my daughter was alive or dead. My family was in a state of confusion as to whether to conduct burial prayers for her” says Maalim Hassan, a 67-year-old man living in Garbisaley village in the outskirts of Mogadishu city.

The death of a loved one is marked by agony, grief and uncertainty. Families can obtain closure with funeral rites and, with time, come to terms with the fate of their deceased.

Unfortunately, hundreds of thousands of people are missing or separated from their families around the world as a result of armed conflict, other situations of violence, natural disasters, humanitarian emergencies, and migration. For many, their whereabouts remain unknown.

Maalim Hassan, is one of those people. He had been separated from his daughter, Asmara Maalim, for 22 years. She was only 13 years old when she was separated from her family whilst fleeing conflict in 1999. Her family moved from Lower Shabelle to Mogadishu city without her. Asmara was assisted by her neighbors who later moved to Yemen with her.

“One day our former neighbors from Lower Shabelle called me from Yemen and said my daughter is safe and sound and I should contact her by phone. I felt a lot of happiness and my heart was content” he adds.

He reached out to the Somali Red Crescent Society (SRCS) to further assist as he didn’t have enough money to call his daughter in Yemen. The SRCS offered a phone call service to reconnect the father and daughter.

“Now I talk to my daughter day and night. She is married and has a family of seven children.” He adds with a smile.

Maalim is among the few who are lucky enough to find their loved one.

In Hargeisa, Amina Ahmed has been missing her son, Mohamed Ali, who migrated to Europe four years ago.  A tracing request was opened by the Finnish Red Cross to search for his mother based in Hargeisa town. The SRCS was able to locate Amina after searching for two years.

“I was heartbroken all these years looking for my son. I am now happy we have found each other and can communicate through phone.” She says.

The Somali Red Crescent Society (SRCS) helps families stay in touch through the use of Red Cross Messages (RCMs), phone calls and Trace the face – an online photo gallery of people looking for their lost relatives.

In 2021, the ICRC together with the SRCS helped successfully locate 88 missing persons. In addition, over 65,000 Red Cross Messages (RCMs) were exchanged and close to 54,000 phone calls were facilitated between separated family members. A total of 2,400 names were read out in “Missing Persons” radio program on BBC Somali radio.