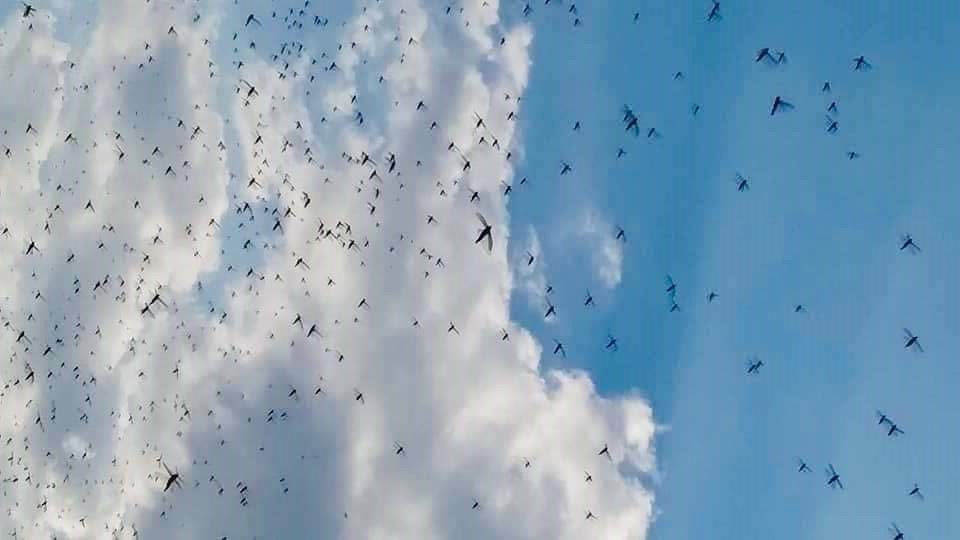 Somalia is bracing a new wave of desert locusts threatening farmlands, while parts of the country are already reeling from destructive seasonal floods and rainstorms. This fresh desert locust invasion is causing alarm among the farming communities, threatening their livelihood and harming food production and income.

In anticipation of the harvesting season, farmers went ahead with sowing only to see their crops devastated by locusts, especially in Middle Shabelle and Hiran.

“Most of the farms in Jowhar town have been destroyed by floods in the last six months now. The water is stagnant on the grounds and no one can farm in this state. On top of this flood problem, we have had locusts destroying the few vegetables and fruits remaining” says Yusuf Ahmed, a farmer in the area.

Desert locusts thrive in wet weather which allows immature swarms to rapidly complete their maturation. Breeding is currently underway and is expected to cause swarms to start forming and continue until the end of the year. Communities have been using traditional methods such as throwing stones, creating smoke and noise from pots and pans as a means of chasing away the locusts.

A new wave of desert locusts in Somalia is causing alarm among the farming communities. This is a threat to their livelihoods. pic.twitter.com/qnuSja8v1z

35-year old Muna Hussein has lost two of her farms to both the floods and locusts. The locust has decimated her whole plantation consisting of rice, maize, sorghum, tomatoes, beans and sesame. She is now without a job and an income to feed her ten children.

“I have been a farmer all my life. That is all I know, and it is my lifeline. The situation is getting really difficult especially with the locust eating all the food we were trying to grow and planning to sell” she added.

Riverine and flash floods are being felt not only by farmers but by all people living in these regions. Thousands of people have been forced out of their homes, increasing their vulnerability to food insecurity, as well as reducing access to clean water and health care.

The ICRC, together with the Somali Red Crescent Society (SRCS) has supported more than 16,000 farmers in Beledweyne, Kismayo, Hudur, Wanlaweyn and Lasqoray with cash grants and agro-recovery grants to help get back on their feet. Families who were affected by floods have been assisted with tarpaulins, mosquito nets, utensils, jerrycans and blankets.