2019 marks the 70th anniversary of the 1949 Geneva Conventions. As the backbone of international humanitarian law (IHL), they aim to limit the suffering of civilians during armed conflicts and restore dignity to all those who are no longer taking part in the fighting.

“From ensuring that a wounded person is allowed through a checkpoint, to allowing detainees to send messages to their families, they preserve the core of common humanity in the midst of conflict. During such instances, it is clear that respect for international humanitarian law (IHL) is possible, and that its implementation makes a meaningful difference.

At the same time, violations of IHL persist, causing devastating and unacceptable humanitarian consequences.” (Address of Peter Maurer, President of the ICRC, Geneva, 13 March 2019). Constant efforts are needed to ensure the protection of victims in contemporary armed conflicts, and that the Geneva Conventions and their Additional Protocols remain relevant.

Are you an undergraduate student from any university in Somalia? This is your chance to participate in the 17th ICRC Essay Competition for East African Universities, marking 70 years of the Geneva Conventions, which proposes to reflect on the challenges international humanitarian law (IHL) has brought by the changing character of contemporary armed conflict and the progress of technology.

The essay is to be submitted in English before 30th June 2019 and the winner of the competition will receive a sponsorship to attend an International Humanitarian Law Course in Nairobi, Kenya in September 2019, and a cash prize. 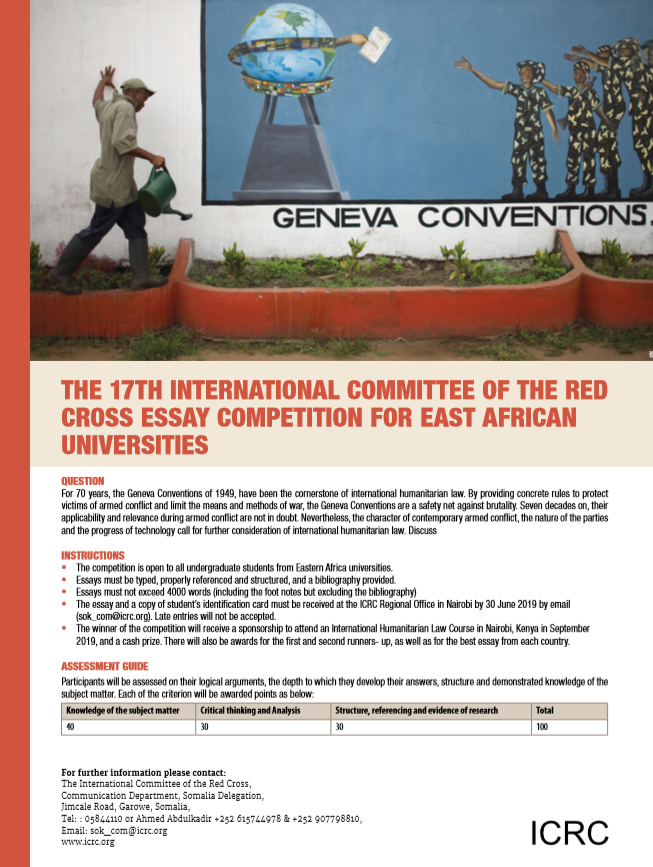