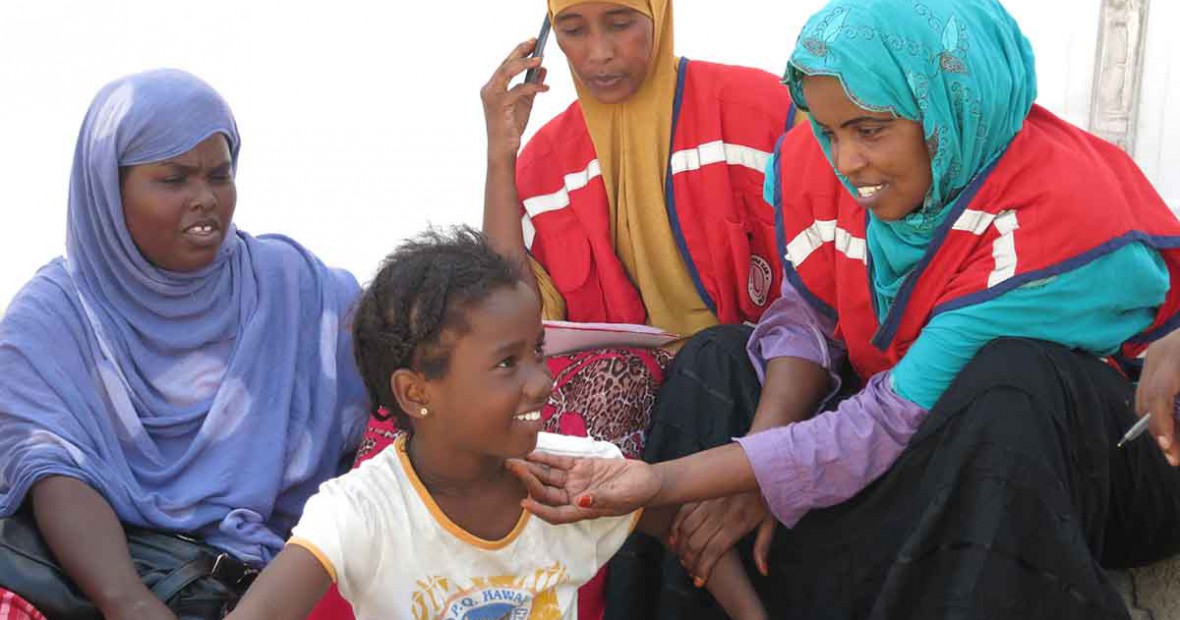 Somali Red Crescent volunteers assist Zeynab, a Somali returnee who fled from the violence in Yemen, reestablish contact with her husband. © ICRC/Miraj Mohamud

Armed conflict and other situations of violence and disasters cause much more anguish than what is seen on the surface. In the midst of terror and panic family members can be separated in minutes. In the chaos and confusion searching for loved ones can be difficult and could lead to years of uncertainty about their fate.

In Somalia, the ICRC, in collaboration with the Somali Red Crescent Society (SRCS) has been trying to re-establish contact between relatives separated by conflict. The situation in the country remains fragile and efforts to locate people and put them back in touch with their families are ongoing.

The need for this crucial service has grown with the escalating conflict in Yemen. Since the conflict began in March, close to 19,000 people have fled for safety to the shores of Somalia. The bulk of the arrivals are in Bossaso, in the Puntland region, with approximately 13,000 people reported to have arrived there by the end of June. 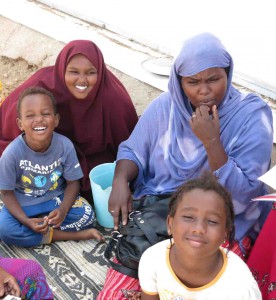 Zeynab with her three children sitting outside a displaced camp in Bossaso. © ICRC/Miraj Mohamud

Zeynab, a Somali returnee from Yemen, arrived in Bossaso with her three children. The sweltering hot weather that greeted them, with highs of 40 degrees, is a stark reminder that the life they had become accustomed to at Kharaz refugee camp in Lahj, South-west of Yemen, is no more.

“I remember preparing breakfast for my children, but it was not meant to be. The gun fire and explosions had become intense. The fighting was at our doorstep. We had no choice but to flee for safety.” Zeynaid said.

She lost contact with her husband amid the chaos. Fortunately, upon arriving at Bossaso, SRCS volunteers helped the two reestablish contact.

“No news from my husband for close to a month. I was so worried. I heard his voice on the phone and was relieved he is alive.” Zeynab said.

The torment of uncertainty over her husband’s fate has been eased.

Ahmed Zaroug, Protection Coordinator overseeing the Restoring Family Links (RFL) programme in Somalia explains ICRC’s involvement.
“The situation in Yemen has consequences that extend beyond its borders. We are saddened by the impact it is having on the civilian population. While ICRC is trying to deliver essential needs in Yemen, here in Somalia, with the SRCS, we help the refugees and returnees reconnect with their families.”

He adds, “It gives them peace of mind to know the fate and whereabouts of their loved ones.”

The Somali Red Crescent volunteers also provide medical aid to the arrivals, some of whom are visibly unwell after the long voyage.

ICRC has been assisting victims who fled the violence in Yemen re-establishing contact with their relatives as well as seeking to clarify the fate of those who remain missing. As of the end of June, over 4000 phone calls had been made to families by those arriving from Yemen.

The RFL program in Somalia also extends to detainees. Visits to people deprived of their freedom is a central part of ICRC’s work around the world. Detainees must be treated humanely throughout their time in captivity, and families must be aware of their fate and have a chance to be in contact with them

In Somalia, ICRC helps detainees trace their families and communicate with them through the exchange of Red Cross Messages (RCMs). In 2014, a total of 3,590 RCMs were exchanged while 22 detainees were able to trace the whereabouts of their families.

Read this article in Arabic