Lives and livelihoods of communities across South Asia have been devastated by the recent floods, adding to the miseries of people already dealing with the COVID-19 pandemic. In India’s northeastern state of Assam, more than 30 lakh (3 million) people across 2,300 villages are reeling under the wave of floods with over 100 deaths reported already. In some parts of the state, these challenges have been compounded by the outbreak of seasonal vector-borne diseases, including Japanese encephalitis, and the African swine flu. The Indian Red Cross Society (IRCS), which has been on the frontline of the nationwide COVID-19 response since March, has been providing vital support to the flood-affected communities with the support of the ICRC.

More than 1,500 Red Cross staff and volunteers are on the ground providing relief across 21 districts of Assam. Distribution of tarpaulin sheets and relief items began immediately after the advent of the floods and till now, 13,600 flood-affected people have received support. The tarpaulins – provided by the ICRC – were pre-positioned at the IRCS Assam State Branch in anticipation of the recurring tragedy in the state. Diganta Bujarbaruah, General Secretary, IRCS Assam State Branch, said, “This year, 50,000 tarpaulins were pre-positioned for 50,000 families across 12 zones across the state so that people can receive help immediately without delay. The risk is inherent in the current COVID situation, but the courage volunteers have shown in the field is remarkable.”

Red Cross staff and volunteers are making their way through the flood waters carrying tarpaulin sheets, dry food, drinking water, mosquito nets, hygiene kits, and other relief items. On a good day, these teams are able to set off on non-motorised boats – the only mode of transport to reach villages that have been completely cut off – and distribute aid to people taking shelter on the embankments and roads. Primarily from the farming and fishing communities, their homes and cattle sheds are submerged – with no trace of the few belongings they used to own. Unsurprisingly, the biggest worry people have at present is their children’s health and safety. The shelters have barely enough space to practice physical distancing and hygiene-sanitation have taken a backseat in the wake of the floods. A close second is the wellbeing of the cattle – a steady source of income for their households that is now left vulnerable in the absence of adequate roof and fodder.

In some areas, there is little room to manouvre the regular boats. Undeterred by this constraint, Red Cross teams have continued with the distribution on banana rafts made by locals. It means more number of trips to cover the affected areas as the rafts allow for some relief material to be carried with just two people on board. The task, however, is less daunting when villagers are ready to give a hand and help push the rafts.

The following photographs give a glimpse of the Red Cross flood response in Kamrup and Morigaon districts of Assam (©ICRC, B. Boro): 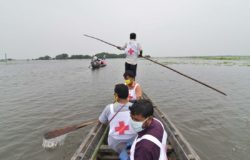 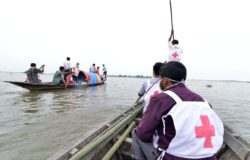 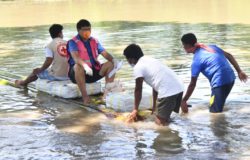 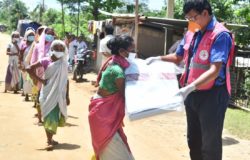 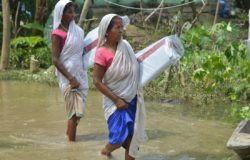 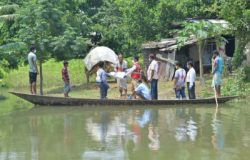 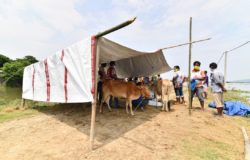 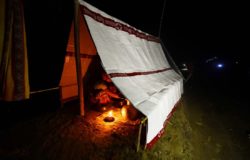