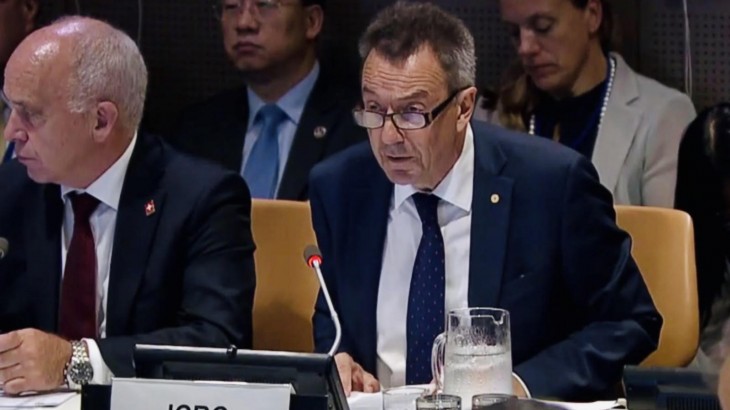 Remarks by ICRC President Peter Maurer at the UN General Assembly High-Level Side Event: “70 Years of the Geneva Conventions: Investing in Humanity Through Multilateralism”

Thank you for your enthusiastic engagement in today’s event on the 70th anniversary of the Geneva Conventions, and especially the participation of our co-hosts China, South Africa and Switzerland.

Universally agreed by all States, the Geneva Conventions ensure there is humanity in war. The pragmatic rules are grounded in battlefield realities and designed to protect and respect human life and dignity. The Conventions do not legitimise or prolong war, but instead by reducing suffering they help prepare the ground for peace.

During the Second World War, the world witnessed the enormous human costs of a conflict which had spun profoundly out of control. The drafters of the 1949 Geneva Conventions sought to ensure history would not repeat, and they left the world with a precious legacy of protection during conflict.

Seventy years on, we must ask ourselves: where can the international community ensure greater protection for civilians in today’s conflicts?

The ICRC has just completed a new analysis of contemporary legal challenges in conflict, to be released before the 33rd International Conference of the Red Cross and Red Crescent. The report examines key areas.

Today I will highlight two critical issues where the international community can strike a better balance between military action and humanity.

Firstly, urban warfare is creating an alarming pattern of civilian harm. With some 50 million people affected, it is clear that many warring parties have not yet adapted their choice of weapons and tactics to the unique vulnerabilities of populated areas.

We need only to look at the flattened cities of Aleppo, Taiz or Mosul to see the devastation that urban warfare can cause.

In particular, the use of explosive weapons that have wide area effects in populated areas put ordinary men, women, children and infrastructure at high risk of indiscriminate harm.

Parties must do more to ensure all feasible precautions are taken to protect civilians and civilian objects from the impacts of attacks – both harms caused directly and indirectly.

For we know that when international humanitarian law is respected lives are saved, hospitals and schools remain open, electricity and water supplies continue and markets can function. Fewer people are displaced, development reversals are halted, stability overall is reinforced.

We are seeing increasing recognition of this issue globally: just last week the UN Secretary General and I issued a joint appeal to States and parties to conflicts to avoid the use of explosive weapons with a wide impact area in populated areas.

Additionally, I am encouraged by the momentum building among States to develop political declarations to set limits, common standards and operational policy on this important issue.

Turning now to the risks that are emerging with regard to technologies, let me just say the following: cyber weapons, autonomous weapon systems and artificial intelligence already feature in today’s conflicts and we only anticipate their use will exponentially grow over the years to come.

Collectively we face a critical moment to ensure humanitarian protections are in place. Clearly, IHL applies to the development and use of new kinds of weapons and technological developments in warfare, but their novel characteristics are raising questions on how to comply with the rules.

Do we want life and death decisions in warfare, and the grave and uniquely human responsibility they involve, to be delegated to software, algorithms, machines?

Public sentiment has been relatively clear on this question, with surveys regularly showing a significant opposition to the use of autonomous weapon systems with a strong sense that humans must make life and death decisions.

The ICRC is working with States on the application of basic IHL concepts in these emerging fields and we ask that they engage in open dialogue with us on these important issues. The world cannot afford to miss the opportunity to protect humanity on these new frontiers.

We must be vigilant in guarding against the erosion of international humanitarian law and take steps to rectify harmful behaviours. Undeniably there remain patterns of ongoing violations: and the consequences are devastating not only for individuals and families, but also for communities and the stability of entire regions.

Instead, when respected, international humanitarian law reduces the risk of physical and social damage to communities over the long term.

IHL is championed in many international forums, it is the cornerstone of training among many militaries, and there is strong public support for humanity in war. Positive examples of its daily implementation abound:

Tens of thousands of detainees have remained connected with their families; prisoners of war have been released and repatriated; and human remains have been returned to relatives.

The death toll from anti-personnel landmines has drastically declined, and land continues to be de-mined as States party to the landmine convention implement their obligations.

Non-State armed groups have made commitments against the recruitment of children in hostilities and against sexual violence.

And daily, medical services of governments and armed forces are treating wounded enemies solely based on medical need, without regard to their political, religious or other affiliation.

The endurance of the Geneva Conventions shows us what is possible when States take collective and individual action to uphold the law and humanitarian principles.

As it was in 1949, prioritizing humanitarian protection remains a question of political will. On this anniversary we call on States to strengthen the legacy of protection – to keep watch over their legal responsibilities and continue to take practical steps for ambitious interpretation and thorough implementation of international humanitarian law.