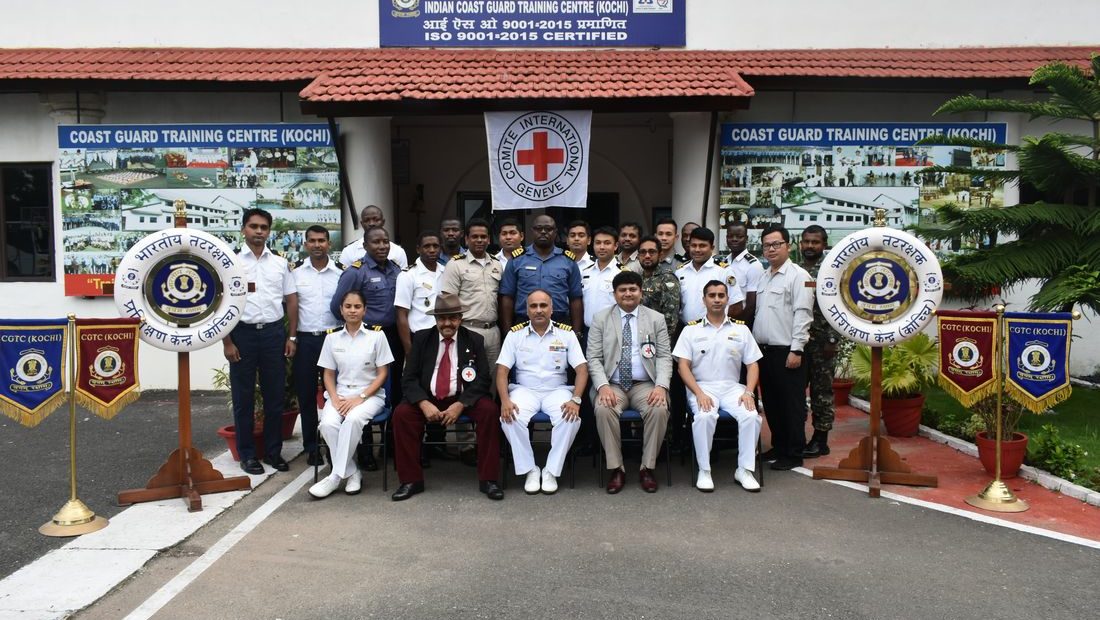 The course is designed to make Naval and Coast Guard officers aware of the general principles of IHL. ©ICRC

The International Committee of the Red Cross (ICRC) recently conducted a training session on International Humanitarian Law (IHL) for 19 navy and coast guard officers from eight countries, including Nigeria, Maldives, Ghana, Benin, Myanmar, Bangladesh, Sri Lanka and Cameroon. The two-day session was conducted on 2-3 September 2019 at the Coast Guard Training Centre (CGTC) Kochi where these officers are undergoing “Maritime Law and Operations Course for International Officers” facilitated by Indian Coast Guard under the aegis of the Ministry of External Affairs, Government of India.

The CGTC is a premier training institute, mandated to undertake specialised training of Coast Guard personnel from India and abroad. Indian Coast Guard executes operations in support of national defense during war in addition to its peace time role.

The course is designed to make the Naval and Coast Guard officers aware of the general principles of IHL and the IHL applicable to naval warfare using case studies. The course covered relevant sources of law, including the Geneva Conventions and their Additional Protocols of 1977, The Hague Conventions, sections from San Remo Manual and select weapons treaties.

The sessions were interactive and began by covering historical development of the Law of Armed Conflict at sea and command responsibility, visit and search procedures and rules regarding capture of vessels at sea, measures short of attack, hospital ships at sea, the rights and obligations of neutral States and belligerents and limitation on naval blockade. The participants also had the opportunity to discuss the application of core IHL principles after viewing the movie “rules of war”.

The course concluded with group discussions and case studies on naval operations. The officers were awarded certificates jointly by DIG Deepak Kumar, officer in-charge, CGTC, and the ICRC upon successful completion of the course.