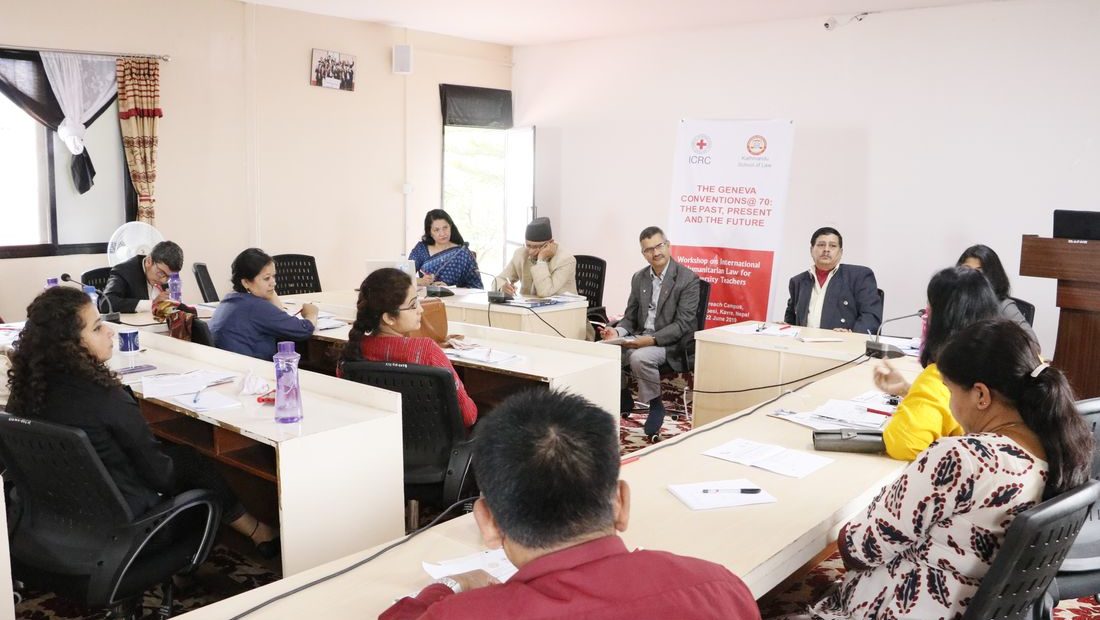 The workshop brought together 20 academics from eight institutes, along with members of the Nepal Red Cross Society. ©ICRC

The International Committee of the Red Cross (ICRC) in partnership with the Kathmandu School of Law (KSL) organised a capacity enhancement workshop on international humanitarian law (IHL) for university teachers to mark the 70th anniversary of the 1949 Geneva Conventions. The event – held on 21-22 June 2019 at the KSL outreach campus in Kavre – brought together 20 academics from the legal, humanities and social science streams at eight institutes, along with members of the Nepal Red Cross Society.

The participants deliberated on the contribution made by the Geneva Conventions in the last 70 years in reducing suffering during armed conflict and the challenges to IHL compliance. They also expressed strong concerns about its lack of application in many conflicts across the globe which is resulting in devastation and unacceptable humanitarian consequences. Created for the worst of times, the Geneva Conventions preserve the core of our common humanity.

The panelists representing the national judicial academy, national IHL committee, security forces and the academia updated the participants with several initiatives taken by these bodies for integration, promotion and application of IHL in Nepal. The workshop deliberated on several tools and resources (print, online, videos, blogs, platforms) available in the ICRC in addition to the methodology being applied, and agreed for mutual exchange of ideas and resources.

The workshop concluded with recommendations for consideration by the ICRC and academic institutes. These included sharing best practices from Nepal for the ICRC blogs and law and policy platforms as well as developing a network of IHL professionals.

Prof Geeta Pathak Sangroula from KSL and the ICRC representatives, Dr Anuradha Saibaba and Krishna Chandra Chalisey, led the discussions. This was the first such workshop in Nepal bringing together members of the academic community on the theme of the anniversary of the Geneva Conventions. A wider event is planned in August that will gather all relevant stakeholders on IHL.