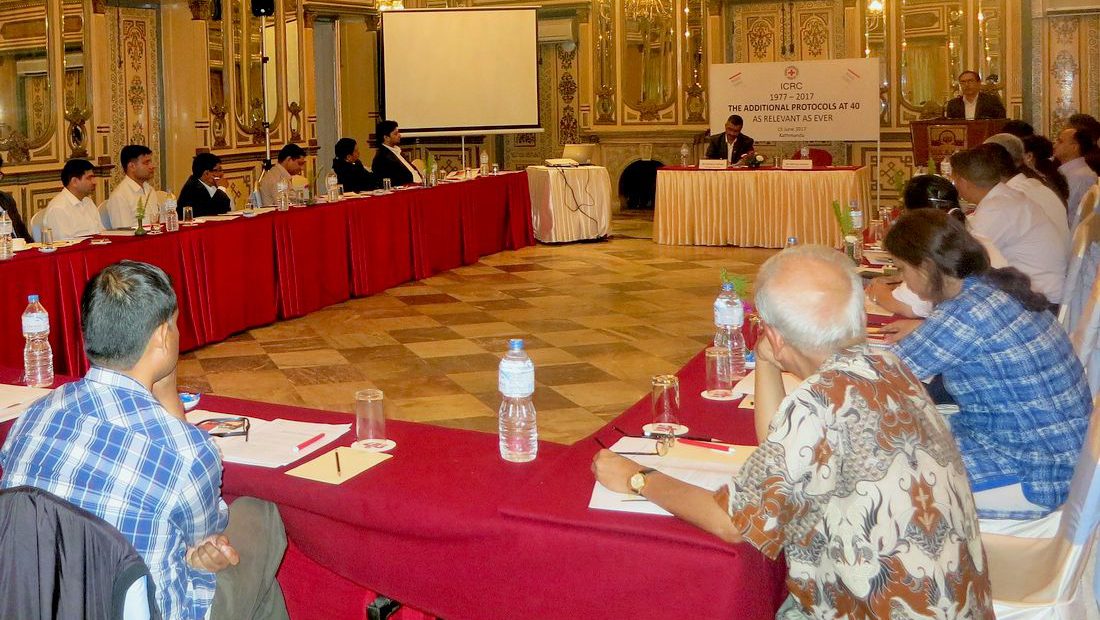 The 40th anniversary of the adoption of the Additional Protocols to the Geneva Conventions of 1949 was recently commemorated by the ICRC mission in Kathmandu. Representatives from the ministries, government agencies and constitutional bodies, armed and security forces, academia and think tanks, Nepal Red Cross Society as well as rights-based organisations gathered to mark the occasion.

Mr. Dilli Raj Ghimire, member-secretary of the National IHL Committee of Nepal who was present as the chief guest, highlighted initiatives taken by the Government of Nepal for the promotion of IHL in partnership with the ICRC. The opening session was followed by two presentations — on ‘Protocols Additional to the Geneva Conventions of 1949: History, Scope and Current Relevance’ and ‘Nepal, International Humanitarian Law and Additional Protocols’ — by Sunod Jacob, Legal Adviser, ICRC New Delhi Regional Delegation, and Prof. Geeta Pathak Sangroula from the Kathmandu School of Law, respectively.

Mr. Krishna Chalisey, ICRC Mission In-Charge, said, “We take this opportunity to urge the Government of Nepal to consider accession to the Protocols. The ICRC stands ready to offer legal expertise for further explanation and interpretation of treaty provisions of the Protocols”.

Adopted on 8 June 1977, the Additional Protocols I and II reaffirmed and developed the rules of IHL and significantly improved the legal protection covering civilians and the wounded. To date, out of 196 State parties to the Geneva Conventions, 168 have ratified the two Protocols, six have ratified AP I but not AP II and 22 have not yet ratified any of the two Protocols. Nepal, a party to the Geneva Convention, is yet to accede to the APs.